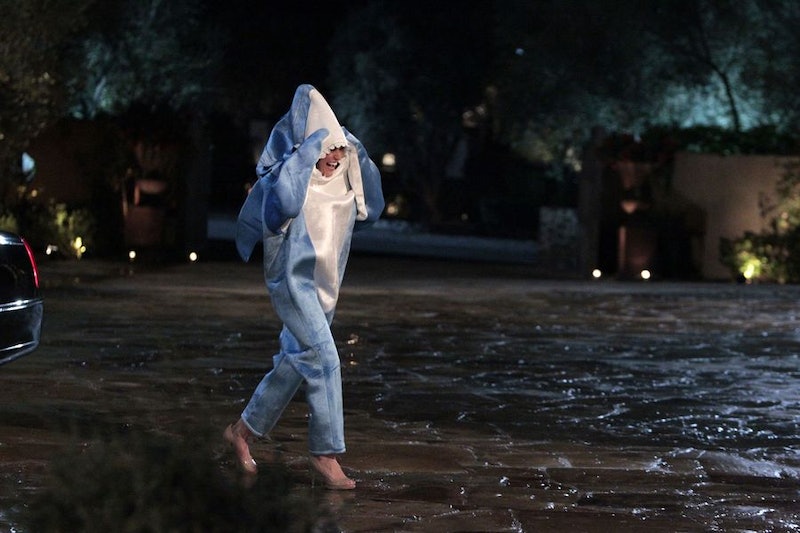 When ABC finally announced Nick's Bachelor contestants, and I discovered that many of them listed dolphins as their favorite animal — I was thrilled. Not only because it afforded myself and my fellow editors to write headlines like, "So Many Of Nick Viall's Bachelor Contestants Love Dolphins, There Must Be Something In The Water," but also because I, too, love dolphins. I'm so passionate about the sea that I joke on an almost daily basis that I would like to please run away to the ocean and be a dolphin now, thank you very much. I was excited to see Alexis, the aspiring dolphin trainer, talk about our similar loves on national television. Unfortunately, Alexis still has some aspiring to do because her Bachelor costume was a shark and not a dolphin — but she wouldn't own that at all.

Look, I respect a bold limo exit, and heels + shark costume is a pretty good one. Unfortunately it became incredibly clear that she legitimately thought she was paying homage to her favorite ocean animal, the dolphin, with her outfit. Instead of making a joke about not being able to find a dolphin costume but still wanting to represent her love of the sea, Alexis tried to convince anyone and everyone that she was in the right, when she was really wearing some sort of Left Shark outfit.

Ahead of the season, host Chris Harrison explained to Entertainment Weekly that Alexis is dolphinitely wearing a shark costume (that pun is mine, not Harrison's, though I'd like to think he would approve). He told the outlet:

I love that Harrison got all in-depth with her about fin type, when all you really have to do is see that her costume has gills. Sharks are fish and breathe under water, which is why they need gills. Dolphins are mammals, breathe air, and have blowholes. It's basic biology, folks.

It's pretty funny that Alexis was so insistent that her costume was a dolphin considering that so many contestants (one-sixth, to be precise) also listed dolphins as a favorite animal. Likely on no other season would she have been so easily called out, but everyone from Chris Harrison to Nick himself took it upon themselves to check and see if she really thought she was dressed as a dolphin. "I have a shark, she thinks she's a dolphin. That's a concern," Nick joked during a talking head. "You know this is a shark right?" Nick asked Alexis at one point. "Do we need to, like, go through aquatics? This is not a dolphin."

"No, it's a dolphin," Alexis insisted, before the camera cut to talking head of her saying she hoped to be the first dolphin to get a rose. She also would be the first shark, so at least there's that.

But, you have to love how much fun she had that first night. From her great pun-filled entrance ("I dolphinitely can't wait to talk to you more inside"), to her going in the pool with the costume still on, to her frequent dolphin calls — she was having a blast showing off her love of the ocean animal. And, that's what the whole "aspiring" part of her job title means — she has a little ways to go on the whole science side of things, maybe — but there's no denying she knows her porpoise in life is to work with dolphins... just as soon as she can tell them apart from sharks.