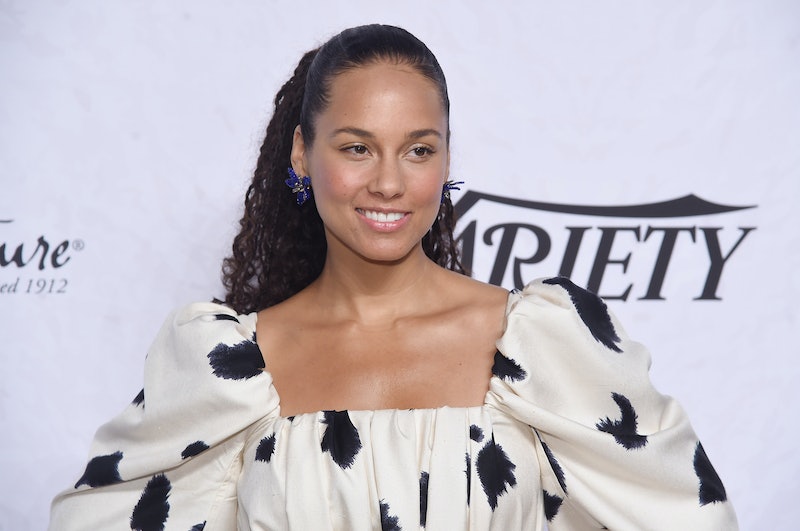 There's always a lot to look forward to on music's biggest night, from behind-the-scenes sneak peeks to live performances from some of the year's best artists. This year, though, Alicia Keys is hosting the Grammys, and it might be the most exciting part about the whole ceremony. On the morning of the show, Keys started her Grammy day like she does any other — with prayer and meditation. She shared a snapshot of it on Instagram and beautifully set the tone for the rest of the day.

"This is how I start most of my mornings off," she wrote. "In grounding and gratitude and asking for clarity. Envisioning the day and putting light around it. Today more then ever I wanted to share the energy I prayed for and called for all of us to feel. So just know your day is surrounded by love, light and greatness!!! I called on it for all of us... Here's to the best day of our lives so far!!"

On the eve of the awards ceremony, Keys also shared a few images on her story of some last minute preparations — they were never stressed or rushed, though. Only excited and enlightened. She posted a picture of a script or program from the network on her kitchen counter with the handwritten caption, "Tomorrow." She also shared a photo of her team preparing and captioned it, "No sleep until 2/11," which is the day after the Grammys. She followed that photo with one featuring sheet music that she was presumably studying, and a coffee cup that read, "We are happy to inspire you." If only everyone in the world was capable of such positivity while facing a potentially stressful situation. After all, hosting the Grammys is a major gig, but Keys appears to be nothing but calm.

On Jan. 15, Key posed an adorable video announcing the news that she'll be hosting the Grammy, and ever since then, she's been publicly committed to making this year's show one to remember. At a press conference on Feb. 7, per Good Morning America, Keys told reporters that her main goal was to keep performers and artists relaxed, not stressed, during the whole night. She's no stranger to the Grammys and she knows how easily the vibe on and off-stage can be disturbed.

"You come to these things as an artist and you're juggling so many things and there's so much pressure on you," she said. "I would love to just ensure the peace and the good energy in the room, so that we can all feel the true blessing: to be able to have the gift of music as our universal language."

She's made it clear in all of her comments regarding the gig that she wants her hosting to leave a positive thumbprint on the ceremony's history. "This is a real moment," she said to GMA. "I think that the energy you're gonna feel is gonna be far different than anything you've ever felt." She also said that she wants to "really craft this [telecast] to be very specifically mine."

Despite some of the drama that has encompassed other parts of the ceremony preparations, including Ariana Grande's withdrawal from the performance lineup and nominees Kendrick Lamar, Drake, and Childish Gambino's decision not to perform, Keys will make sure the night maintains a positive energy, and that credit is given to all artists where it's due. And if it goes as well as anticipated, she may even be back next year.