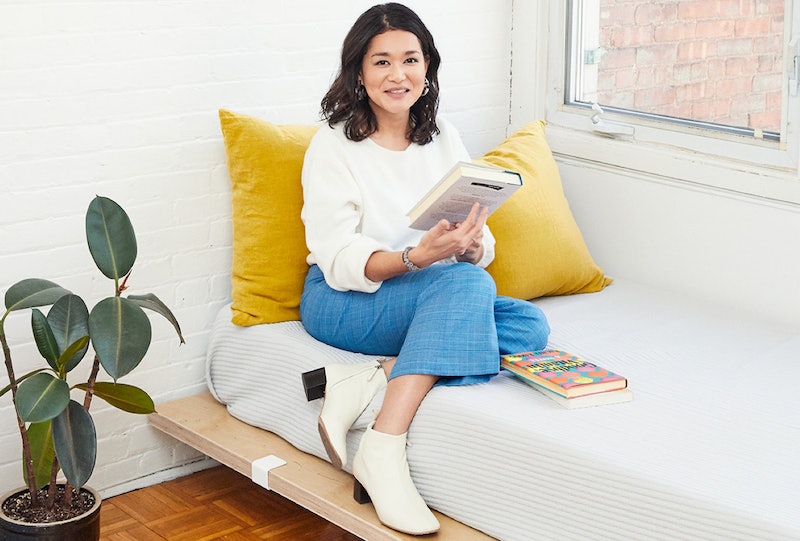 Meredith Jenks/Courtesy of Girls' Night In
By Melanie Mignucci
April 3, 2019

In Bustle's Quick Question, we ask women leaders all about advice — from the best guidance they've ever gotten, to what they're still figuring out. Here, Alisha Ramos, CEO and founder of Girls’ Night In, shares how she turns her brain off, the worst piece of advice she ever received, and why she makes a self-care to-do list.

Alisha Ramos might be the millennial queen of self-care. The self-described INTJ/Capricorn founded Girls’ Night In in 2017 as “a club for women who’d rather stay in tonight,” and quickly found that plenty of women wanted to join that club. The newsletter features a note from the editor (that’d be Ramos), a roundup of thought-provoking links about self-care and the occasional #sponsorsthing, and closes out with a self-care related meme. Personally, I look forward to it showing up in my inbox on Friday mornings, along with more than 100,000 other subscribers. Girls’ Night In also comprises a book club and IRL events, but Ramos tells Bustle that the company was born out of her wanting to, well, stay in more.

“As someone in my later 20s [when I founded Girls’ Night In], I really loved hosting my friends for a night in,” Ramos says. “I’m an introvert, and at that point in my life I no longer enjoyed going out to bars and louder places.” She says that during this period, she was looking to cultivate deeper relationships with her friends and people around her, “particularly offline.”

“We're in this age where we're constantly online and on Instagram and we're living such busy lives. And I love the general idea of a girls’ night in because it's a moment for you to slow down.”

Here, Ramos tells Bustle about what advice she’s still looking for, how she gets pumped before a big meeting, and what’s on her home, work, and self-care to-do lists.

What do you need advice on now?

Oh, so many things. One area that I'm thinking about on a professional level is, as we grow as a business and as we grow as a team, how do I build the right team around me? And how do we live out our values as a team and create that culture that embraces self-care? I have managed folks before, but I’ve never run a company before. It’s a steep learning curve. We have amazing people who work at Girls’ Night In, and they’re really excited to grow the business alongside me, but I’m really excited to help them grow into themselves as leaders.

What’s the worst piece of business advice you’ve ever received?

The absolute worst was, “Don’t do this.” I started Girls’ Night In as a side project and I had a full-time job at the time. I have and had a really great relationship and rapport with my boss. But I think out of true concern for me and my wellbeing, my boss told me not to move forward, and that was worrisome. But I’m glad I stuck to my vision, since obviously if I had listened to that advice, Girls’ Night In would not be a thing. Sometimes you have to listen to your gut. There are going to be so many people who say no, and it is important to listen to those people, especially if you trust them. But ultimately I think your gut is right most of the time.

What’s the best piece of advice you’ve ever received?

There is one that I think about a lot and credit goes to Cindy Gallop, who I admire. In terms of salary negotiation, fee negotiation, whatever, when you’re trying to acquire money, her advice is to say the largest number out loud that you can without laughing. It’s so bold, it’s what men do, it’s what women should do. The worst that can happen is that they say no. It’s helped me so much in negotiations.

How do you pump yourself up before a big meeting or presentation?

For me, honestly, it’s a lot of preparation. If I know that I'm really well prepared, then I'm less nervous and anxious. And so if I'm giving a talk for instance, I'll try to run through it with someone else, maybe three to five times until I have it. I also have my friends — they’re my biggest cheerleaders. If I am feeling nervous, I’ll just tell them hey, I feel kind of nervous, send good vibes. And then they’ll just send you a million emoji and bitmoji.

I put my phone in a completely different room from where I'm sitting. So if I'm in the living room, I’ll leave it in my bedroom. And that's number one, the most important thing. Recently, I’ve also gotten really into SoulCycle, which I know I’m couple of years late to, but it's very convenient to where I live. Being locked in a dark room for 45 minutes is one forcing mechanism for me to shut my brain off and get a good workout out of it, which I love. Aside from that, I love cooking at home and I find it really meditative. Recently, my significant other and I challenged ourselves to cook at home four nights a week. It takes a little bit more planning, but it's such a great way to have conversations about your day and your week, what you're thinking about, play some music on your speakers, and just have a fun time away from a screen.

Oh, a lot of things. We just ordered a dining table, so setting that up in our kitchen area and getting our house ready to host more. A lot of the things on my to do list job-wise are around hiring and team management, which is very boring, but that's what I'm working on now. Self-care wise, I do have it on my list to get a mani-pedi this week. I wrote a post a while ago about making a self-care to-do list, and I got a little bit of pushback from that. People were saying that self-care shouldn’t be work, but it’s like, whatever works for you. For me and my personality type, I do need to plan everything, and if it's not in my calendar or on a to-do list, it’s not going to happen.