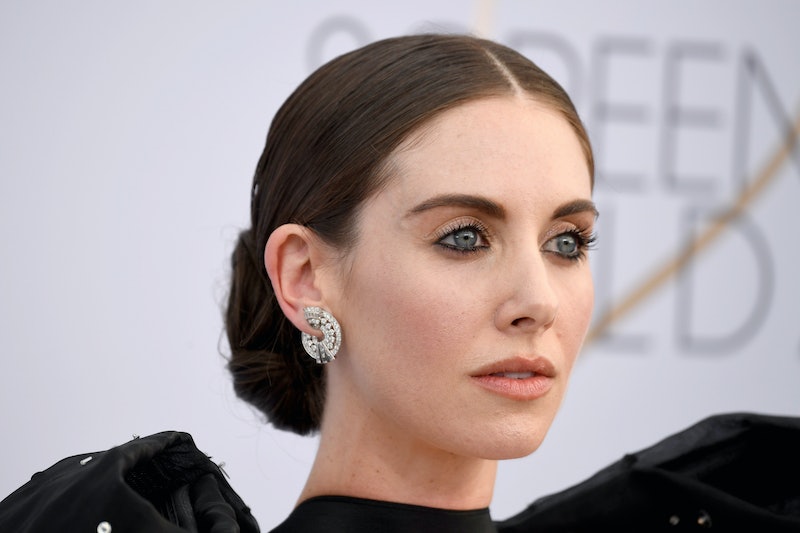 Anyone can walk onto an awards show red carpet and look fabulous, but there's an art to stepping out and standing out. An expert at the latter? GLOW star Alison Brie. Alison Brie's black Miu Miu dress at the 2019 SAG awards features a gigantic bow on the back and it is so enormous that it almost distracts from how gorgeous the rest of her ensemble is. Almost.

Brie told the hosts of the SAG Awards red carpet on TNT that the black bow was detachable, but she was sewed into the dress, like a haute couture fashion show model. The rest of the gown is simple and sophisticated — a strapless black dress featuring two smaller bows at the waist. It's a number Audrey Hepburn could have definitely been spotted wearing to an awards show back in the '60s. But the standout feature of the gown is most definitely the oversized black bow that is bedazzled with sequins. It wraps around her neck, like a choker, and sits on her back, almost like a pair of expensive, designer wings.

To balance out the drama of the bow, Brie's hair was styled in a slicked back low bun by celebrity hairstylist Robert Vetica. Vetica used Leonor Greyl and Harry Josh hair products to create the elegant chignon. Makeup artist Quinn Murphy used L'Occitane products to prep Brie's skin and Koh Gen Do "everything" (according to his Instagram) to create Brie's glowy red carpet makeup look.

To complement the sparkly sequins on Brie's bow, the actress wore Art Deco circle earrings with diamonds and a cocktail ring with diamonds, both set in platinum by Fred Leighton.

Alison Brie fans took to social media to chime in with their thoughts on the Miu Miu gown and its enormous bow. "One-uping Nicole Kidman in the black bow game from the Golden Globes," wrote Ada (@palindr0me) on Twitter, referring to Kidman's black bow hair accessory at the last awards show. "Normally Alison Brie serves my fave looks but today it's a no with the bow," tweeted Danielle (@taronegertuns), who was clearly unimpressed with the major fashion forward statement.

But regardless of whether you love Brie's look or hate it, Erik Anderson (@awards_watch) expressed what was really on everyone's minds when they first laid eyes on Brie's SAG Awards look: "OMG Alison Brie's BOW."

Here's another look at it, in all of its sparkling glory. We have to say, it is a total show-stopper fit for a Hollywood star.

We're keeping our fingers crossed for the beautiful Brie, not only because she's an incredibly talented actress, but because we also want to see that fabulous dress and bow up on the stage.