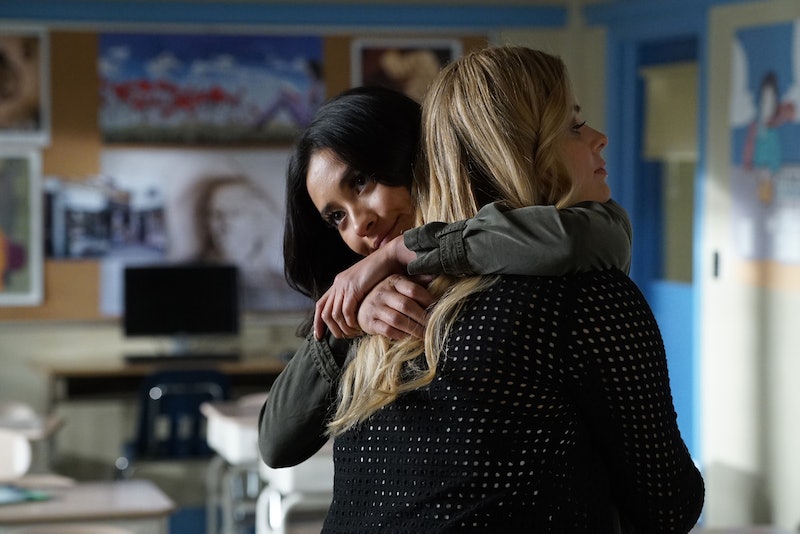 Pretty Little Liars wrapped up with mostly happy endings for everyone — Mona got the dollhouse she had always wanted, Ezra and Aria got married (still gross), Hanna was pregnant, Spencer had an opening with Toby, and Alison and Emily were together and in love. The best part? They're raising adorable twin babies together. Alison and Emily had a wonderful ending on Pretty Little Liars, but will it be the same on PLL: The Perfectionists, the new spinoff? It's hard to say, so let's just relive where we've been, to see where we can go.

Emily started Pretty Little Liars off with a boyfriend, but she finally came out and began dating an array of inappropriate women. One might think that Alison could be Emily's worst love interest, but she dated someone who tried to drown her and also someone who tried to help Uber A kill all of her friends, so again — Emily's taste was never that good. And while she was pining away at duds, Alison was always in the back of her mind. This was when Alison was straight-up evil, though, so Alison used to tease Emily and use her affections against her. Like I said — Alison was a garbage person, and Emily loved her anyway.

That's pretty much how their proposal went in the Pretty Little Liars finale. Emily thought Alison was being secretive and cagey, but it was only because Emily's mother gave Alison Emily's grandmother's ring to propose to Emily. During her speech, Alison told Emily, “You loved me when I was an ugly human being. You make me a better woman because you searched for one. Do you promise to do that every day for the rest of our lives?" And cue the tears. The babies that Alison and Emily have together were the result of a terrible Uber A plot, but Alison and Emily clearly made the best of it and decided to live happily ever after.

Until The Perfectionists, that is. Emily and Alison are living separately because Alison is on the West Coast at a new school full of beautiful brats, and Shay Mitchell, who plays Emily, is not attached to the project. Love is dead, isn't it? Not exactly. Sasha Pieterse, who plays Alison, told TV Guide that these two just might need some time. She said:

"Alison and Emily will always love each other. They have these two beautiful babies together. It's complicated. Life is complicated, and I think piecing themselves and each other and their world back together since A happened is difficult... It's very clear that Alison loves Emily and the babies. I think both Emily and Alison need time to process their life and I think that's what it is. "

Shay Mitchell told TVLine that scheduling was partly to blame for her not appear on the show, but honestly, it makes sense that Alison and Emily would need to take some time to process all of the A and Uber A stuff. Normally, people would need to be in therapy for their whole lives to process what the Liars have seen, so perhaps it's good that Alison and Emily are taking a moment to breathe. Instead of fighting and lashing out, it could make them stronger in the long run. Until then, we'll always remember the way they were.