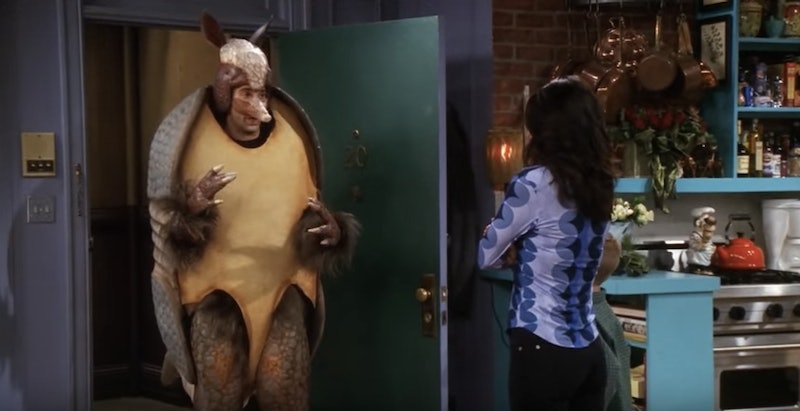 Everyone has their own holiday traditions, but it would be hard to top mine: staying in my pajamas all day with Friends on in the background and whatever I'm eating balanced on my stomach. It's the adult equivalent of rushing down the stairs bright and early to open presents, because each episode is its own present to unwrap, no matter how many times I've seen it. But having seen them approximately infinity times, I can tell you that there are some episodes that edge out the others, which is why this holiday season, I want to give you a gift — a ranking of every Friends holiday episode.

And hey, don't worry about the fact that you didn't get me anything. Just think of me as your pop culture Secret Santa, and you'll get me back next year with something I really want. (Hint: It's wine.) Or, y'know, maybe we can just trade apartments or whatever if you lose a bet to me. All I'm saying is I'm not too picky, so worst case, just get me more episodes of Friends from a vault somewhere, and in the meantime, here are the 10 holiday episodes of everyone's favorite show, ranked from best to slightly-less-best.

10. Season 5 — "The One With The Inappropriate Sister"

Only vaguely is this even a holiday episode; Phoebe has an arc about volunteering for the poor and she wears a Santa hat, but that's about it. This is the one where Ross wants Joey to write a screenplay. I don't know if you get to keep calling yourself "Dr. Geller" if you truly believe that Joey Tribbiani has a screenplay in him. In other news, Monica and Chandler are in their secretly dating phase, but it isn't enough to keep this holiday episode off the bottom of the list.

You know how sometimes you rewatch something from your childhood and it doesn't quiiiite hold up? That's how I feel about the Season 3 holiday episode, "The One Where Rachel Quits." Obviously there's the part where Rachel quits her job at Central Perk, which is great and fine, and the part where Phoebe gets sad about all the unused Christmas trees going into the chipper, leading the friends to fill the apartment with them so none have to meet that gruesome fate, which is adorable. But then there's also that part where Ross breaks the leg of a Girl Scout so she can't sell cookies anymore, and then ruins her chances of going to Space Camp by making a mess of selling the cookies himself. I still love you, Friends, but not your finest hour...

There's nothing technically wrong with this episode, and it has more of Monica in it, which is weirdly rare for a holiday episode, so that's great, but "The One With All The Candy" was one of two holiday episodes in Season 7. And since the other Season 7 episode is actually at the top of my list, this one feels like more of an afterthought, no matter how invested I was in seeing whether or not Monica ultimately made enough candy for all her neighbors. No spoilers!

7. Season 4 — "The One With The Girl From Poughkeepsie"

The title comes from Ross' long-distance relationship that ultimately makes him fall asleep on the train and wind up in Canada, but the real meat of this one is between Monica and Joey. Monica has a new job where she gets no respect, so Joey suggests that he pretend to be a new hire, so she can fire him in front of the rest of the staff and show that she means business. Except, this is Joey we're talking about, so he ends up not wanting to give up the job and the money, which complicates everything. Plus, this is the episode with Phoebe's song that rhymes holiday themes with all her friends' names, so bonus points.

I tried to put this one near the middle, because it's a big ol' flashback episode, and I know people are pretty divided on these. I don't mind them myself, because it's all about the nostalgia, now that the show is off the air. But there's also that storyline about Chandler and Monica being separated over the holidays because of his job in Tulsa, for purists.

One of my greatest joys is watching Ross get tangled up in these overdramatic relationships, and watching his bizarre behavior as he tries to extricate himself. So, the episode where Mona sends out a Christmas card with the two of them on it, even though they're newly dating, is just what I like. And for an added layer of intrigue, Rachel is pregnant in this one. So it's all Ross' fumbles all the time. Ho ho ho!

I could take or leave the storyline where Chandler and Joey do their shopping for the girls at a gas station because they left it too last-minute. But there's a lot of good stuff for Phoebe, who as the title suggests is trying to find her father, and for Rachel and Ross, who are in an especially confusing period of their will-they-won't-they, owing to Rachel's discovery of the list Ross made of her least-attractive features. Oh yeah, that.

I'm a sucker for those early Friends episodes, so this one was definitely going to rank high for me. Everybody agrees to go to the same New Year's Eve party, but only if no one brings a date, but everybody breaks the rule except for Ross, who brings the monkey he randomly found. (Hi, Marcel!) We're talking Rachel with Paolo, Phoebe with David who ends up going to Minsk, and Chandler with Janice. Some real O.G. stuff here.

All the friends getting their very own holiday storylines is my sweet spot, so Season 6 is my jam, and I wish I could live forever in the world of Monica and Ross running "the routine" at Dick Clark's New Years Rockin' Eve and trying to out-mug each other in front of the camera. This is the meaning of Christmas, right here. We've found it.

1. Season 7 — "The One With The Holiday Armadillo"

Winner winner, chicken dinner. At the end of the day, this is the holiday episode that's seared into my mind, so I couldn't end the list with anything but this. It's so very Ross to want to make Christmas important to Ben and then immediately botch it, but power through in an armadillo suit anyway and try to make that a thing. And it's so very Chandler to unintentionally save and ruin the day in exactly the same moment by showing up in a Santa suit. True perfection, may the Holiday Armadillo watch over you and yours this holiday season.

Annnnd I'm spent. Or am I? Maybe I have a million hours worth of energy left to marathon the rest of the seasons in order as well? It's hard to tell, but happy holidays to you while I figure it out.