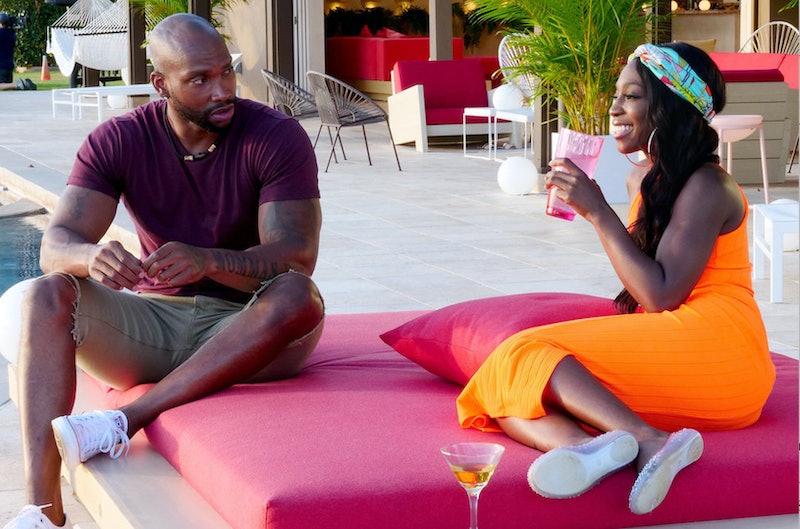 It may only be a few weeks into Temptation Island's second season, but already, it seems pretty likely that Ashley G. and KB are dating after the show. Ashley signed up for the experience hoping to test if her boyfriend Rick could fully commit to her, since he'd been unfaithful in the past. But it was actually her who ended up being tempted first: the first night in the house, she hooked up with KB.

In the Oct. 24 episode, the two continued to explore their connection, and Ashley made it pretty clear she wasn't thinking about Rick, even telling KB he made "it easy to move on." Naturally, they haven't said anything about their relationship status post-filming, but they're not exactly out of touch. They follow each other on Twitter, and KB has liked a few of Ashley's tweets related to the show.

Ashley recently made her Instagram private, but as Bustle writer Marenah Dobin pointed out, the two were interacting on that site too. After Ashley shared a Temptation Island promo in which she said, "He's so handsome," KB commented on the post, "U ain't so bad ya self," setting a flirty tone by adding a winking emoji. Ashley replied with the facepalm and laughing emojis, writing, "You're trouble."

Rick, too, has seemingly kept in touch with Medinah, who he's been connecting with on the show. However, the only evidence is that he commented fire emojis on one of her pictures, which is fairly innocuous.

Meanwhile on Oct. 22, Ashley tweeted a vague comment that could refer to a romantic relationship ("When I'm over you - you won't have to ask"), though it's unclear if she's referring to Rick, KB, or someone else. Additionally, she still follows Rick on Twitter, but as of publication, he doesn't follow her back.

When Ashley went on Reality Steve's podcast, he teased that viewers "will see a progression" between her and KB as the season moves forward, but that they'll have to watch to see how it plays out. "There were times when I questioned KB," Ashley added, but she wasn't willing to spill much more.

Whoever Ashley ends up leaving the island with, she seems to have a positive attitude about the experience. She told Bustle in a previous interview that she doesn't regret what happened because it helped teach her about "self-love," and that she has to hold herself accountable for her actions instead of placing blame on others. Hell, maybe she even leaves the show happily alone.