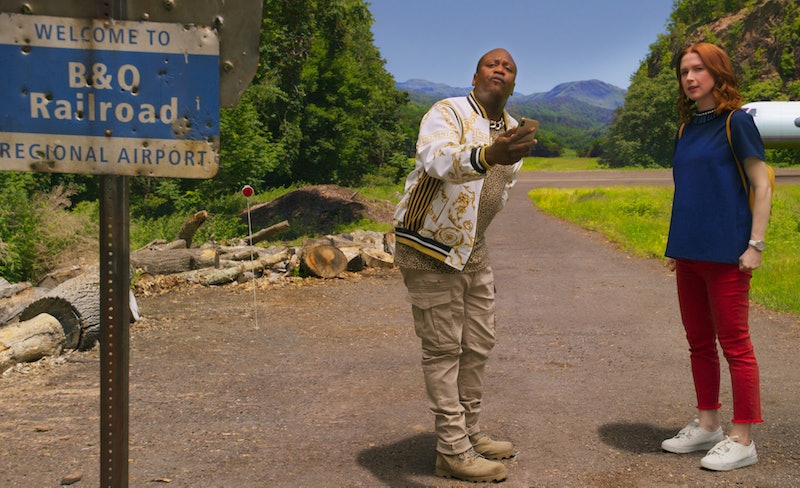 Spoilers ahead for Unbreakable Kimmy Schmidt: Kimmy vs. The Reverend. Because it's a Choose Your Own Adventure story, there are a lot of different possible endings in the Unbreakable Kimmy Schmidt movie, Kimmy vs. The Reverend. The film picks up mere days away from the protagonist's wedding to Frederick (an English prince played by Daniel Radcliffe), but things quickly veer off track when she finds a mysterious book in her backpack that suggests the Reverend had more than one bunker of kidnapped women. In her quest to uncover the truth, Kimmy must make a number of big and small decisions...some of which end with her happily at the altar, and some of which don't.

Want Kimmy to get her happy ending with Frederick? Choose the most responsible, Kimmy-like options. In the mood for a little more chaos? Follow your worst impulses and see where it gets you. Ultimately, all roads lead to the same place: if you hit a dead end, you're simply taken back to your previous choice and given a do-over. But if you want to save yourself some time, here are all of the endings you can encounter.

If you choose for Kimmy to make out with Frederick instead of plan her wedding or read the book she found in her backpack, the story just fast forwards to a month later. This also happens if Kimmy calls Donna Maria instead of Cyndee or Gretchen (who is staging a bank heist in a Hillary Clinton mask). The newlyweds are perfectly happy, but you don't get to see what got them from Point A to B.

The Everyone Dies Ending

If Kimmy chooses to take Jacqueline with her to Indiana instead of Titus, things go awry pretty quickly. Jacqueline gets her son, Buckley, to pilot them there because he's been taking flying lessons...except he hasn't been going to them. The three die in a plane crash, while Titus has an unfortunate (and fatal) treadmill accident.

If you choose for Kimmy to be sociable with the Reverend instead of getting down to "beeswax" while visiting him in prison, he will do a weird dance, slip, hit his head on the counter, and bleed out. Kimmy will never learn where the other women are hidden.

If you opt for Titus and Kimmy to wait 4,000 minutes for their Uber (which is coming from Little Rock, Arkansas), they will die and decompose into skeletons. Their driver will give them 1 star.

After Kimmy and Titus sidle into a West Virginia bar looking for help and receive a less than welcome response, Titus decides to warm them up by singing their requested song: Lynyrd Skynyrd's "Free Bird." In one scenario, Titus does indeed know the lyrics, because he learned "the poetry of Lynyrd Skynyrd" throughout all four years of high school in Mississippi. This prompts one of the bar patrons to lend Titus and Kimmy his tractor, and they ride off to find the Reverend's bunker.

If you choose that Titus only thinks he knows "Free Bird," though, it turns out he actually only knows the lyrics to another song called "Free Bird," which he and his coworkers made up when he worked at a pet store. The audience becomes enraged and begins shooting. You see a 9-1-1 call, in which the caller tells the dispatcher that someone was "disrespecting Skynyrd."

There are a few different endings in which the Reverend successfully finds the Mole women before Kimmy, then drives them all to Florida "where everything's legal." This happens if Kimmy hasn't yet read the book by the time she gets to West Virginia, and also if you decide not to babysit the baby at the gas station.

The Frederick and Xanthippe Ending

If you choose for Kimmy to "stomp" the Reverend, she goes crazy, becomes "a hill person," and leaves Frederick at the altar. He then hits it off with Xan, who was supposed to be officiating their wedding. And since the Royal Blimp flew over an active volcano, Xan is now the queen of England.

The Frederick and Lillian Ending

There's some discomforting chemistry between Kimmy's fiancé and Lillian — mainly because his nanny, Fiona, looks exactly like her, and she's the only one who really showed him love as a child. If Lillian, not Cyndee, tries to seduce Frederick with a karaoke song at his impromptu bachelor party and you later choose for Kimmy to shoot the Reverend, the movie fast forwards to five years later. Kimmy went missing in West Virginia, and Lillian and Frederick are now together. She has an elegant solution for everyone in front of him for the throne: a hammer.

The Bride of Frederick Ending

Alternatively, if Kimmy 'splodes the Reverend, the movie fast forwards a year. Kimmy has died, but Frederick was able to clone her with some of her hair. He and the clone now live in Harrisburg, Pennsylvania together.

Through an unclear sequence of events, choosing to 'splode the Reverend can also lead you to a scene of the the Reverend in hell with Mr. Frumpus. The Rev loves it so much, he thinks he's in heaven.

If you choose for Titus to eat the woodland banquet instead of chase after Kimmy, Jacqueline is forced to tell everyone that her client is not in his trailer, thus setting off an unfortunate string of events. Because Jacqueline lied, the men take it as a sign that Time's Up is over and they don't have to believe women anymore. Titus, meanwhile, has ruined his singing voice from eating all that dirt. Kimmy and Frederick are the only ones who get their happily ever after.

Choose the right scenarios (mainly Kimmy choosing to spare the Reverend and Titus making it to his film shoot), and everyone goes out on a high note — except for the Reverend, who was kicked to death in prison. Seems like he got his white belt in karate for nothing.

More like this
Here’s Everything Coming To & Leaving Netflix In February
By Jake Viswanath
You Might Want To Rewatch This Key 'On My Block' Scene To Understand 'Freeridge'
By Grace Wehniainen
The 'Freeridge' Cast Shared Their Hopes For A Potential Season 2
By Grace Wehniainen
Ashton Kutcher Wants Danny Masterson “To Be Found Innocent” In Rape Retrial
By Jake Viswanath
Get Even More From Bustle — Sign Up For The Newsletter
From hair trends to relationship advice, our daily newsletter has everything you need to sound like a person who’s on TikTok, even if you aren’t.