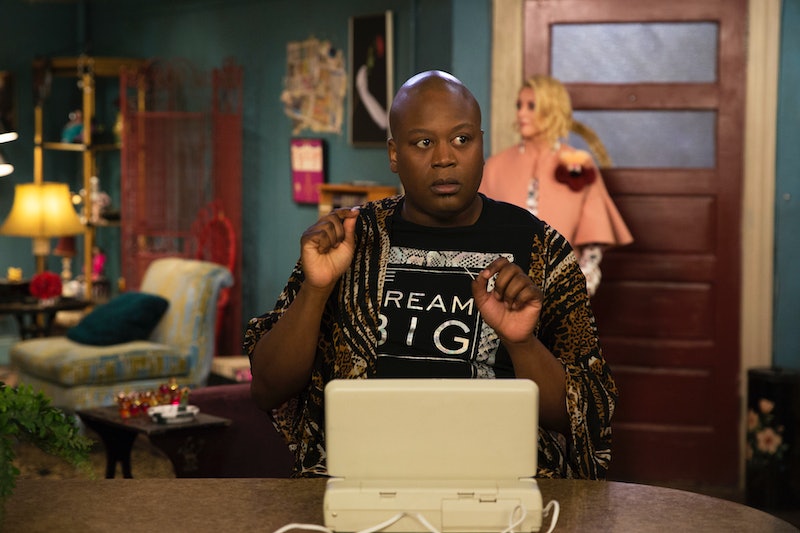 Spoilers ahead for Unbreakable Kimmy Schmidt Season 4, Part 2. As a comedy series that's centered around a kidnapping victim, Unbreakable Kimmy Schmidt has never shied away from dark topics, and Season 4, Part 2 is no exception. After broaching sexual harassment in the first half of the season, Titus' #MeToo storyline is continued, albeit with the same problems that underscored Kimmy's earlier arc. The show makes a lot of strong points, particularly when it comes to the people of color who have largely been shut out of the movement in real life, but it still feels a little irreverent to be making light of such a serious issue — even if it's meant as satire.

Viewers will recall that earlier in Season 4, Titus Andromedon (Tituss Burgess) was sexually harassed by a puppet named Mr. Frumpus during his Sesame Street audition, and co-creator Tina Fey made clear that incident would be revisited in Part 2. "These people who have been through these experiences, in every gradation of them, are survivors," she told the AV Club. "They want to not be identified solely by what happened to them. They want to live their best lives, and at the same time, that push-pull of 'I don’t want this to be the defining thing about me, but I’m still going to speak up and do the right thing,' that's what Titus grapples with in Season 4."

Indeed, Titus is approached by investigative journalist Ronan Farrow (played by himself) about coming forward with his Mr. Frumpus experience, and he struggles with the decision. Titus explains that he doesn't want that one moment to define him, but that he's also ashamed because he complied with the puppet's advances. No one loves the spotlight more than Titus, but the struggling actor is also worried that his assault will be all he's known for.

"I don't want to be defined by that one, horrible day!" he laments to Lillian and Kimmy — the latter of whom can certainly empathize, since she had to testify against her abuser back in Season 1. Still, while Kimmy tells him she thinks publicizing his story is the right thing to do, Titus' fears are only intensified when an angry mob goes after another victim of Mr. Frumpus, Coriolanus. Members of the press hound him on the street and ask why he's the first person to accuse the puppet in 50 years. It's a clear-cut example of victim-blaming, and it's so ingrained in society that Titus blames himself for going along with his abuser's wishes — despite the fact that he is in no way responsible for what happened to him.

Kimmy Schmidt hasn't always treated sensitive topics with nuance — specifically ones about race — but having the sexual predator be a puppet is a clever way to deal with a delicate situation, and watching a throng of people jump to the defense of an inanimate object (including Frumpus' somehow blameless puppeteer), helps to drive home the absurdity of believing abusers over the abused. That being said, using a toy to portray a sexual predator may also minimize the trauma endured by real-life sexual assault victims. It's a fine line to walk, but as we've seen, Kimmy Schmidt has never been a show much concerned with boundaries.

It's also notable that all of Mr. Frumpus' victims appear to be black men. After Titus tells Lillian about his experience with the perverted puppet, she recalls that when her late husband, Roland, went on Sesame Street back in the '70s, Mr. Frumpus also made a move on him. "I guess that puppet has a type," Titus comments. This is further enforced when Coriolanus, another black man, emerges as a victim, too.

That's not to diminish women's experiences in any way, but by flipping the script and making the victims men and the perpetrator a doll, Unbreakable Kimmy Schmidt not only parodies the disappointing way victims are often treated, but expands the conversation to include a far less discussed viewpoint.

The most prominent real-life example of what Titus is going through is the experience of Brooklyn Nine-Nine actor Terry Crews, who accused a high-level Hollywood agent of groping him the year prior in a series of 2017 tweets. "This whole thing with Harvey Weinstein is giving me PTSD. Why? Because this kind of thing happened to ME," he alleged in a Twitter thread. "I was going to kick his ass right then— but I thought twice about how the whole thing would appear. '240 lbs. Black Man stomps out Hollywood Honcho' would be the headline the next day. Only I probably wouldn’t have been able to read it because I WOULD HAVE BEEN IN JAIL. So we left."

Crews also described his assault in a testimony for the Senate Judiciary Committee in June 2018. "I was told over and over that this was not abuse," the actor said, according to the Atlantic. "That this was just a joke. That this was just horseplay. But I can say that one man’s horseplay is another man's humiliation."

Still, people continued to dismiss Crews: 50 Cent reportedly mocked him in a since-deleted Instagram post, per the Atlantic, and Wendy Williams criticized him for speaking out. "I was asked in my meeting this morning, do I think it was brave of him to come out? I said, 'No. It's not brave — he's just talking,'" she said on The Wendy Williams Show. "But it may have a really negative effect on his career. Do you know what I mean? Being all black, and being all chatty. And this guy, the agent — he named names. Terry is going in. It will, in my opinion, affect his career."

This culture of toxic masculinity has been a prevalent theme throughout the run of Kimmy Schmidt — skewering men like the Reverend, Mr. Frumpus, and men's rights activist Fran (Bobby Moynihan) — but it's unclear whether the show wants to elevate the #MeToo conversation or make light of it. The perspectives and stories it's sharing are important, but it's doing so in an imperfect way.