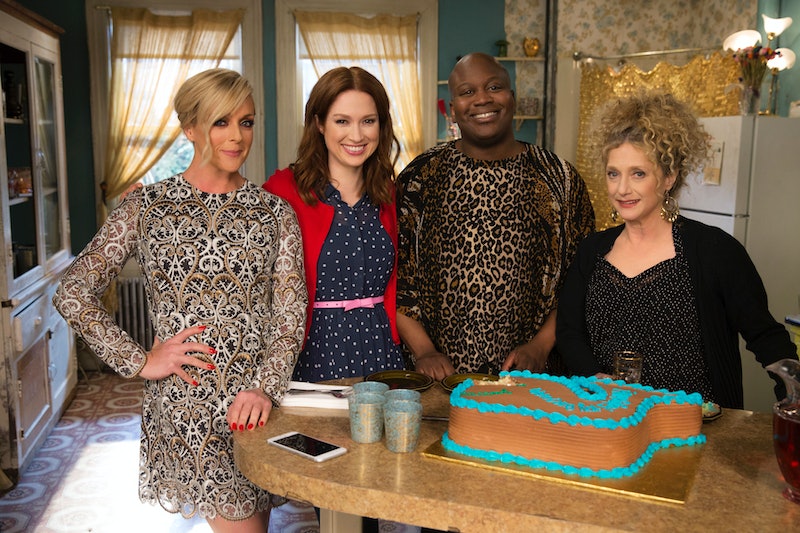 Kimmy, Titus, Lillian, and Jacqueline are alive (damnit!) and still strong as hell in Netflix's Unbreakable Kimmy Schmidt: Kimmy vs. the Reverend, which picks up an indeterminate amount of time after the events of the original show. But it's been more than a year since they all said farewell in the Unbreakable Kimmy Schmidt series finale, so you may need a recap about where we last left everyone before hitting play.

The final episode, which aired in January 2019, began with the ongoing gentrification of East Dogmouth finally reaching Lillian's (Carol Kane) doorstep. This resulted in the city seizing the home (or tugboat) where she, Kimmy (Ellie Kemper), and Titus (Tituss Burgess) lived. Even Jacqueline (Jane Krakowski) was facing an eviction of sorts, with her commandeered office space closing shop. But because a hopeful show like Kimmy Schmidt obviously couldn't end on such a dreary note, everyone got a happy ending. Here's how each of their storylines left off.

After Kimmy lamented that always taking care of everyone but herself had only left her homeless and jobless, Xanthippe (Dylan Gelula) shared an inspirational quote from her new favorite book that "everyone at Columbia's reading."

As it turned out, Xan was unknowingly quoting The Legends of Greemulax, the children's fantasy book Kimmy had written under the pen name "K.C. Scmidt." Kimmy was equally shocked to discover her book had become so popular that the website, which she just thought didn't work, had been crashing from the overwhelming traffic.

The episode's final scene fast-forwards four years to June 2023, where a now rich and successful Kimmy, joined by her once-absent mother Lori-Ann Schmidt (Lisa Kudrow), is opening Greemulax World at Universal Studios. After cutting the ribbon, a young boy tells Kimmy that her books made him feel safe, bringing her story full circle.

After spending four seasons trying to get his big acting break, Titus finally got the opportunity of a lifetime when he was cast as the understudy for Rafiki in a Broadway production of The Lion King. Meanwhile, his ex Mikey invited him to sing at his wedding to "Blandrew," which Titus planned to use as a chance to win Mikey back. When the old woman who normally played Rafiki was no longer able to perform, Titus had to choose between making his Broadway debut or rushing off to stop Mikey's wedding. Except he didn't have to choose in the end: Mikey ran out on his wedding and showed up at the theater to tell Titus he wanted to spend the rest of their lives together. After the men kissed, the camera cut to Titus onstage belting "The Circle of Life" as Mikey watched proudly from the audience.

In the future timeline, "Broadway star Titus Andromedon" is walking the red carpet for his feature film debut, Sliding Doors 2: Tokyo Doors. Mikey, now his husband, is with him and has brought along their "beautiful ethnic babies: Keitha Hernandez and Cape Politano-Andromedon."

After a rival talent agent named Eli (Zachary Quinto) informed Jacqueline that her star client Greg Kinnear is still under contract with him, all hope for her burgeoning career seemed lost. But he eventually offered her a job, where she brought in her suddenly successful client, Kimmy. "You can change the world, Kimmy Schmidt, because you already changed the most important person in it: me," Jaqueline told her former employee.

Four years later, Jacqueline and Eli have solidified themselves as a power couple and are also working at Titus' red carpet premiere.

With the city about to implode her home, Lillian crafted a plan to go down with the ship, so to speak. She decided to blow herself up inside the house so she could torment all the yuppies and tourists as a ghost. Of course, her plan went awry and she survived the explosion, solidifying her status as a true New York icon. "I am New York, baby! And I ain't goin' nowhere!" she proudly announced to a crowd outside the house.

The 2023 timeline reveals that the "MTA rolled out the new voice of the New York City subway," bringing Lillian's personal brand of vitriol to "lost, confused, and afraid" commuters. Sample announcement: "Hey, the doors will be opening on the wrong side of the train from now on. Good luck you honky sons of bitches."

See what else happened to her and the rest of the characters in Unbreakable Kimmy Schmidt: Kimmy vs. the Reverend.