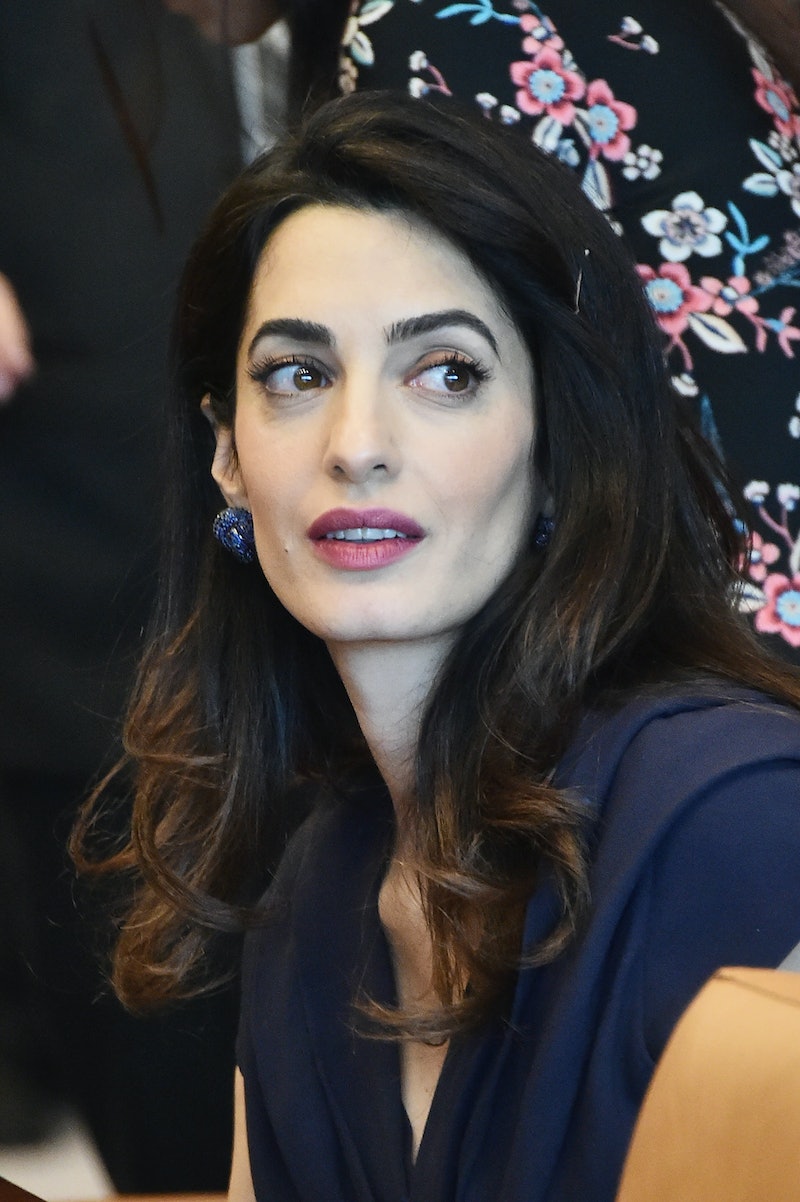 When it came to President Donald Trump's attacks on journalists, she pulled no punches that night. As she was being honored as the 2018 Global Citizen of the Year at the United Nations Correspondents Association Awards on Wednesday, the well-known human rights lawyer Amal Clooney strongly criticized Trump in her UN speech.

Clooney, who has worked on some high-profile international cases (including ones involving press freedom), said that the president's administration carried a "chilling effect" on the safety of press members around the globe. Naming countries like Turkey, Brazil, North Korea, the Philippines, and Hungary, Clooney said that reporters there were "under attack like never before."

Trump, she added, "has given such regimes a green light and labeled the press in this country the 'enemy of the people.'"

Clooney also spoke about the late Saudi journalist, Jamal Khashoggi, an American resident who was a Washington Post contributor. Khashoggi went missing in Istanbul, Turkey, after going to the Saudi consulate there on Oct. 2. Later that month, after initially claiming that Khashoggi had left the consulate the same day he visited, Saudi officials said that he was murdered. In November, a senior United States official told CNN that the CIA had concluded that the Saudi Crown Prince Mohammed bin Salman had called for Khashoggi's assassination. A spokeswoman for the Saudi Embassy disputed the findings, denied the crown prince's involvement, and told CNN that "the claims in this purported assessment are false."

On Wednesday night, Clooney brought up Khashoggi's death. "In many of the cases that I have worked on too," she added, "I have seen journalists and opposition leaders ruthlessly targeted so that they cannot criticize leaders."

Clooney has been vocal about global issues over the past. In March 2017, she addressed her audience at the United Nations and implored the leaders of the world to take action against ISIS. In her speech, similar to the one on Wednesday night, Clooney minced no words.

"Witnesses are fleeing," the human rights attorney said. "And there is still not one ISIS militant who has faced trial for international crimes anywhere in the world. So I am speaking to you, the Iraqi government, and to you, UN member states, when I ask: Why? Why has nothing been done? Could it be that these crimes are not serious enough to warrant an international investigation?"

Calling ISIS the "most brutal terror group in the world," Clooney urged global leaders to grasp the consequences of ignoring the militant group. She reminded her listeners that the Security Council had called ISIS an "unprecedented" danger to global peace.

This won't be the first time that Clooney lambasted Trump, either. At the Pennsylvania Conference for Women in Philadelphia in October, Clooney said of Trump, "The president of a country should not publicly ridicule a woman who has come forward to allege abuse."

Clooney was referring to Dr. Christine Blasey Ford, who accused Supreme Court Justice Brett Kavanaugh of sexual assault when they were teenagers. Kavanaugh has denied the allegation.

It's hard to say if Trump will react to Clooney's sharp speech but based on his on frequent Twitter tirades, the president may end up tweeting about the well-known lawyer.