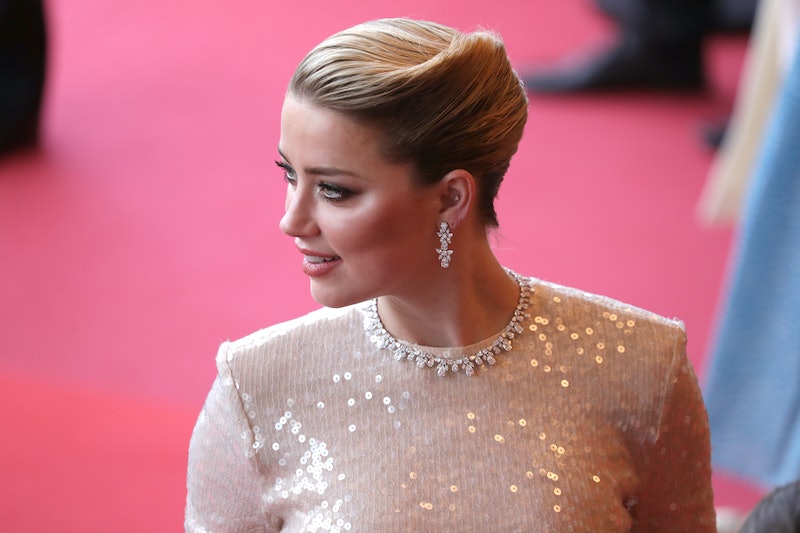 For Heard, part of the motivation for her advocacy work arises from having her privacy violated publicly. In 2014, someone leaked nude photos of Heard as part of a widespread cyber attack on multiple female celebrities, including Rihanna, Vanessa Hudgens, Jennifer Lawrence, and Kim Kardashian. Several of the hackers pled guilty to hacking the accounts, but were not charged for allegedly spreading the photos. According to the Washington Post, Heard told Congress that the photos remain on the internet. "My stolen and manipulated photos are still online to this day, posted again and again with sexually explicit and humiliating and degrading headlines about my body, about myself,” she said. “I continue to be harassed, stalked and humiliated by the theft of those images.”

However, even though her experiences inform the work she’s done, Heard feels that they don’t define her or her work. "I don't feel like the worst things that have happened to me are the most interesting parts of me or my story,” Heard told de Cadenet. “I think what I choose to do with it is."

And what she’s choosing to do with it, is to combat the formal systems that uphold a culture of sexual violence by working to change legislation. “ [It's] the systems that allow [these experiences] to be so pervasive and the actors of those injustices and that violence, to function and continue to function with impunity. That's what I am interested in breaking, baby," Heard told de Cadenet.

Sen. Harris, who is a former prosecutor, spoke to Vice’s Motherboard about the new legislation: “Nobody, under any circumstances, should have private images shared on the internet without their consent,” Harris told Motherboard. “I’m proud to join with my colleagues in the House to reintroduce legislation that will give prosecutors important new tools to bring perpetrators to justice and further deter them from committing such an egregious violation of privacy.

Heard feels that making non-consensual pornography a federal crime is crucial because it will enable outrage at these incidents to be sustained, instead of contained to a short social media cycle. “By codifying our commitment to ending non-consensual pornography and cyber exploitation, moving it from fleeting cycles of outrage and viral social media movements and instead, we’re entraining it in our most important legislative institution,” she told de Cadenet.

Changing this terminology goes a long way to changing these cultural attitudes.

For Heard, she also thinks that the terminology used to describe this sex crime puts the focus of blame onto the survivor, not the perpetrator. "[The term] ‘Revenge porn’ is problematic for a number of reasons, even though it’s catchy," Heard told de Cadenet. "It implies that there was an action, for which the victim was responsible. For you to seek revenge, it implies that somebody did something wrong. Also, it implies intent to harm, which is limiting for many, many reasons if we narrow the definition of what we call nonconsensual pornography, if we limit it to qualifiers like the intent to cause harm. When someone like me gets their photos hacked, and it goes online, that person doesn’t necessarily intend to cause me harm."

Heard’s comments are important for several reasons. One, many survivors of sexual violence are often subjected to victim-blaming comments. And survivors of nonconsensual pornography are no exception. When I teach high school students about the emotional impact of this kind of violation, I hear a lot of kids who have internalized victim-blaming attitudes struggling to resist the urge to say that the victim is somehow responsible for what happened to them. Changing this terminology goes a long way to changing these cultural attitudes.

Heard's comments are also important because they challenge the idea that people who look at these pictures or seek them out once they’ve been leaked are passive participants in the violent act. Each time that those pictures are spread or looked at without the person’s consent, it’s retraumatizing. Consuming or further spreading stolen images is not a passive act, it’s another act of violation, just as writer and actor Lena Dunham pointed out during the 2014 mass leaks.

Although Heard is changing cultural attitudes that reinforce sexual violence, she knows that changing laws is just as important as changing hearts and minds. "That's the beautiful thing about legislation,” Heard told de Cadenet. “It is one thing to change attitudes and when we talk about changing cultural attitudes, we talk about imparting change, we have to appreciate how much of that is informed by legislation which codifies it.”

More like this
24 History-Making Black Women You Probably Didn't Learn About In School
By Ayana Lage and JR Thorpe
25 Inspiring Quotes From Black Women To Celebrate Black History Month
By Kyli Rodriguez-Cayro and JR Thorpe
Ashamed Of Your Screen Time Stats? Here's How To Change That
By Alexis Morillo
Learning To Love, Not Judge, The Lunchbox Wives Of TikTok
By Esther Zuckerman
Get Even More From Bustle — Sign Up For The Newsletter
From hair trends to relationship advice, our daily newsletter has everything you need to sound like a person who’s on TikTok, even if you aren’t.