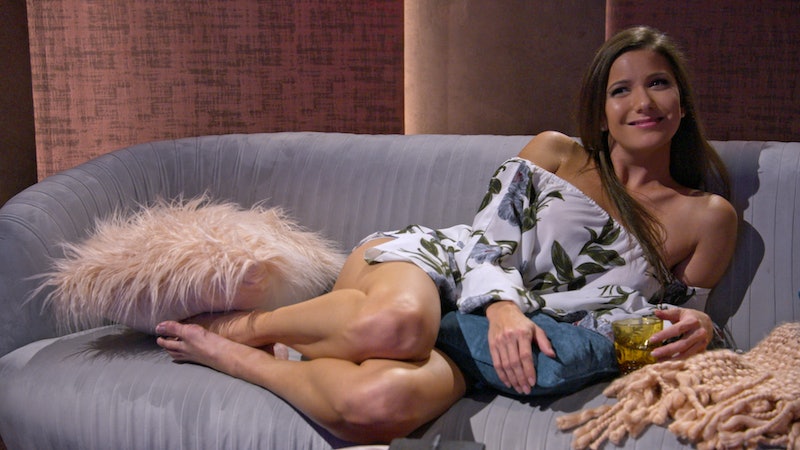 It turns out that "b*tch, you're shysty" was actually the nice version of what Amber wanted to say during the Love is Blind reunion show. The cast of the hit reality show recently appeared on The Ellen DeGeneres Show on Tuesday, March 10. And Amber revealed her Love is Blind reunion confrontation with Jessica was almost much bigger, but her now-husband talked her down before they hit the stage.

After Ellen DeGeneres showed Amber — who appeared on the show alongside Matt Barnett, Cameron Hamilton and Lauren Speed, and Damian Powers and Giannina Gibelli — a clip of her run-in with a drunken Jessica at the bachelorette party, the former Army mechanic revealed that she didn't know the full extent of the situation before watching the show. "Obviously, there was a lot of things in the show I didn't know about," Amber said of Love is Blind, which finished filming a year and a half before its premiere on Feb. 13.

"I thought maybe she had a crush on him," she continued, referring to Jessica's lingering feelings for Barnett after they bonded in the pods. "So, seeing everything when the show aired, I was not happy." In fact, she was so upset that Barnett needed to calm her down before filmed the reunion special with Jessica.

"I'm a very open person, I'm very honest about my feelings," Amber said. "Something was going to be said, and we compromised." According to Barnett, what fans saw was just "like, 20 percent" of the actual anger that his wife was feeling at the time. (Yes, that was 20 percent of what Amber was capable of unleashing.)

As Amber explained in an interview with Bustle, much of her anger on the reunion was due to the fact that Jessica had apparently hidden her feelings for Barnett from the other women while they were filming. "This is part of the reason I was so confused when I saw that she was so obsessed with Barnett," Amber explained in March. "When we were in the pods, [Jessica] was telling everybody that she was in love with Mark and a guy named Taylor."

As a result, Amber was totally blindsided when she watched the show and discovered that Jessica had been "throwing herself at [Barnett] in Mexico," as she explained on the reunion. In response to the confrontation — and to seeing her "cringe-worthy" behavior when watching the show back — Jessica apologized to both Amber and Barnett during the Love is Blind reunion. "I do definitely owe a major apology to you, Amber, and to you Barnett," Jessica said at the time, adding that she wishes them "nothing but the best."

While Amber admitted that she wasn't "there yet," when it came to forgiving Jessica during the reunion, things couldn't be better for her and Barnett, despite all of the behind-the-scenes drama. "We've got a great apartment, a great dog, and we're having a lot of fun right now," Amber told DeGeneres about the state of her marriage to Barnett. After all, if they can survive reality TV stardom, buying a house and starting a family should be easy.