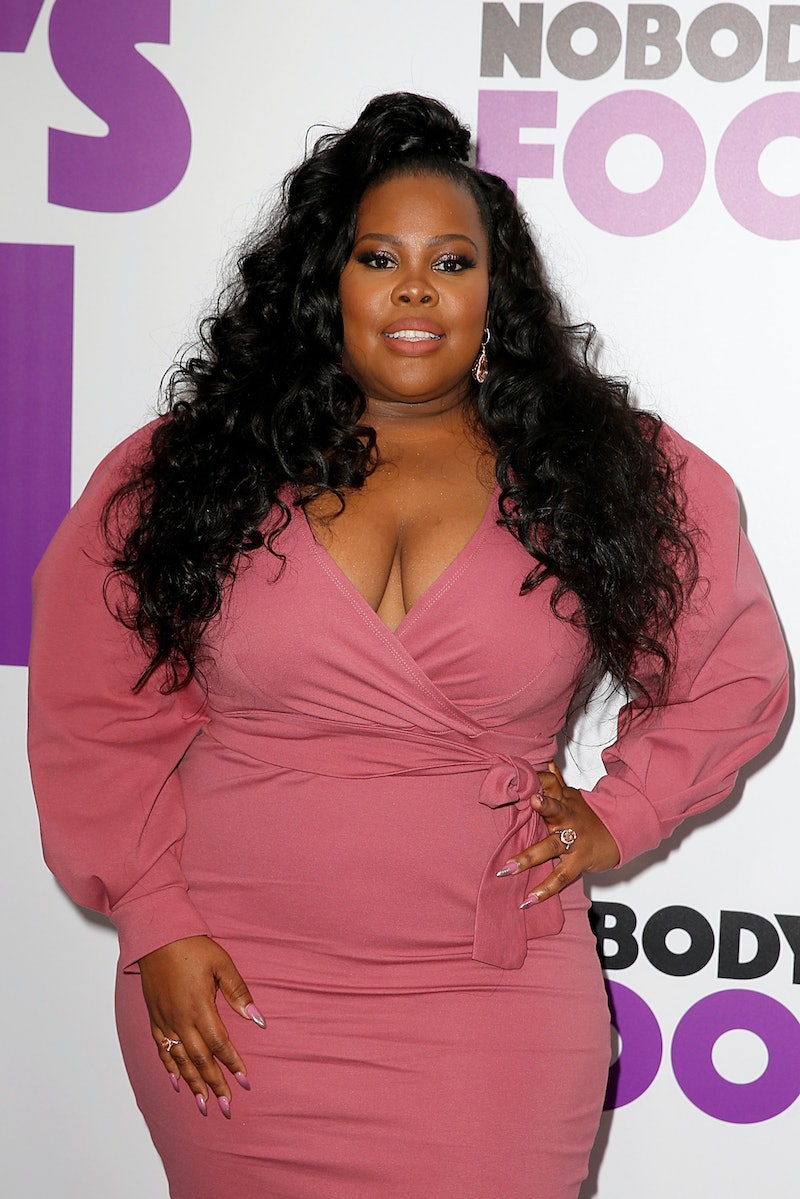 Following the wave of Glee actors weighing in on the Lea Michele scandal and giving their own anecdotes of her alleged diva behavior, Amber Riley publicly weighed in on the Lea Michele's controversy and apology for what she called the "first and last time." After explaining that she "doesn't give a sh*t" about on-set drama, considering "people are out here dying, being murdered by police," Riley did praise Samantha Marie Ware for calling out Michele during an Instagram Live interview with journalist Danielle Young on Wednesday, June 3.

On June 1, Ware wrote on Twitter that Michele made her time on the series "a living hell," and claimed that she threatened to "sh*t in [Ware's] wig" amongst other "traumatic microaggressions." Two days later, Michele publicly apologized for the way she treated her former costars, writing in part that "whether it was my privileged position and perspective that caused me to be perceived as insensitive or inappropriate ... I apologize for my behavior and for any pain which I have caused." Ware seemed to criticize Michele's apology — particularly, Michele's use of the word "perceived" — and encouraged her to donate to a GoFundMe for for the family of James Scurlock, a black man who was shot and killed in Nebraska during a protest.

After revealing that she didn't read Michele's apology, Riley instead shifted the conversation to praise Ware for starting a much-needed conversation. "I'm very proud of her for standing up for herself," Riley said. "I am proud of her not being fearful for speaking her truth." Referencing Michele's tweet condemning the death of George Floyd, which inspired Ware to speak out, Riley explained that "[Her] feeling was, 'I am not going to allow you to jump on what is happening now when you didn’t treat me right.'"

Riley — who admitted that the Glee set was "not the most comfortable environment" to work in — revealed that Ware's post had inspired other black actors to speak out about being mistreated on set. "There were a lot of black actors and actresses that were in my inbox telling me their stories and were letting me know that they have dealt with the same things, being on set and terrorized by the white girls that are the leads of their show," Riley said, adding that the black characters are always "the sidekick" and lower on the call sheet.

She also alluded that after complaining to producers on a set once, she was told that she was "expendable," while the white actors were protected. "The stories I'm reading about how white women are using their privilege and the fact that they are not fireable — something that I was told once on set after having my own complaint — they use that privilege to terrorize their counterparts," Riley said. "We were even told, we were expendable. The colored girls, the black girls, are expendable."

While Riley stated that she was "talking about the culture of Hollywood," rather than specifically about the Glee set, another one of her costars, Heather Morris, stated that Michele was "unpleasant to work with" and "should be called out" for her behavior. "For Lea to treat others with the disrespect that she did for as long as she did, I believe she SHOULD be called out," Morris wrote on Twitter.

Though Morris admitted that she "cannot comment" on whether or not Michele has racist beliefs, the actor and dancer did admit that she and her other white cast members should have spoken up sooner. "It's also on us because to allow it to go on for so long without speaking out is something else we're learning along with the rest of society," Morris wrote.

More like this
The 'Glee' Cast Isn’t Happy About 'The Price Of Glee'
By Jake Viswanath
At 28, Debra Jo Rupp Was Living A Much Different '70s Show
By Grace Wehniainen
'The Queen’s Gambit' Season 2 Tweet Wasn’t From Anya Taylor-Joy
By Mary Kate McGrath, Jack Irvin and Grace Wehniainen
At 28, Rosie Perez Risked Her Career To Stop Playing Stereotypes
By Gabrielle Bondi
Get Even More From Bustle — Sign Up For The Newsletter
From hair trends to relationship advice, our daily newsletter has everything you need to sound like a person who’s on TikTok, even if you aren’t.