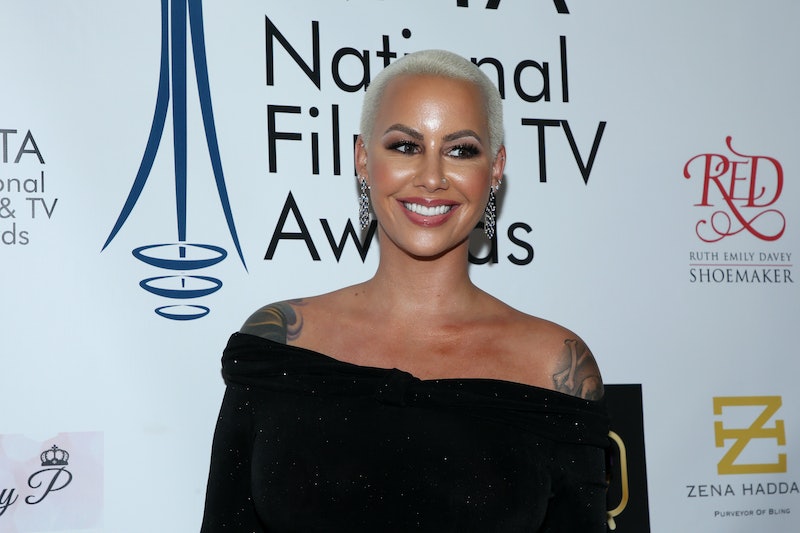 Amber Rose is currently eight months pregnant, but that hasn't stopped her from keeping a close relationship with her sexuality. While many women are expected to trade in their sexiness for motherhood, Rose proves you can still balance both. Amber Rose shared a sexy photo while pregnant, busting the myth that a mom — or a pregnant woman — needs to cover up in order to be seen as respectable.

Rose posted a photo of herself sitting in a chair and rocking a belly-accenting bikini on Aug. 28. The photo was an ad, but her caption held an inspiring — and comical — message. Rose wore a red and white leopard print two-piece from Matte Collection, which featured low rise bottoms and a short sleeve top with a knot. In the caption, Rose wrote, "When ur 8 months Pregnant but Hoe is still life." This was followed by heart smiley emojis.

This was an empowering statement from Rose because it sent a clear message that women weren't usually tapped into their inner "hoe" that late in pregnancy. Rose's bikini photo was a celebration of her body and sexuality, and her body language showed a clear expression of ownership and self-love. Her legs were wide, her shoulders were back, and she was directly looking into the camera. Rose embraced her sexuality.

When you google "maternity swimsuits," you see how different Rose's idea of maternity wear is to that of mainstream society's. Maternity swimsuits skew heavily towards one-pieces that hide the belly, offer plenty of coverage for the chest and back, and are quite conservative.

But celebrating her body and sexuality throughout all of motherhood has always been Rose's objective. In 2018, Rose shared with Closer magazine, "Being a mother is the greatest gift but I think it’s a huge double-standard that you can’t be a mother and be sexy — of course you can. The idea that you can be one but not the other is very small-minded. It’s sad that people feel like they cannot shine in their authentic light because society has boxed you into only one category.”

"I think we aren't comfortable culturally with the idea of women becoming pregnant or mothers who are still sexual beings. I can't help but think in a Freudian lens that perhaps we are deeply uncomfortable with the idea that our own mothers had to be sexual at some point (in most cases) to end up birthing us," Kristen Martinez, a psychotherapist and gender studies expert, shares with Bustle.

"In any case, of course it puts women into a double-bind. You can be sexy until you actually have sex and procreate, in which case you need to put that back on the shelf and become a 'mother': a self-sacrificing, erased sense of self living only for her children. Any sexuality that hasn't been wrung or shamed out of you at that point makes you a target, in this case Amber Rose."

While owning sexiness while pregnant seems to still be pretty taboo, there have been other trailblazers like Rose who refused to give up their sexuality because of their motherhood.

In Rihanna's 2018 Savage x Fenty show, the singer turned entrepreneur cast two pregnant women to walk down the runway in their lingerie. One was Slick Woods, who famously went into labor during the show.

Rihanna also cast a second pregnant model, who wore a sheer, plunging teddy. It's important to note that both women wore revealing lingerie that accented their sexuality rather than dampened it.

In 2017, label Eckhaus Latta sent model and artist Maia Ruth Lee down its NYFW catwalk. Lee was pregnant, and her belly peeked through the holes of the sweater dress she was modeling.

In Jean Paul Gaultier’s Spring/Summer 2010 show, Jourdan Dunn wore a custom bustier over her pregnant belly, proving a mom could still be edgy.

Rose's message of "hoe is still life" is an important one that pushes the double standard of women's sexuality and motherhood.