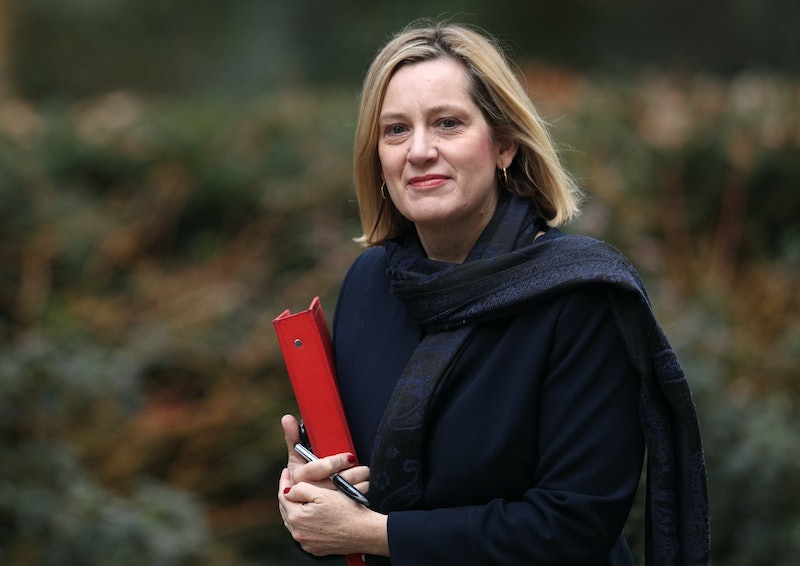 As a general rule, UK politicians aren’t exactly known for being particularly funny on Twitter. When they spend their days debating the ins and outs of Brexit, it’s hardly surprising that they aren’t serving the laughs on social media. However, Amber Rudd proved that just because you’re an MP doesn’t mean you can’t have a little bit of banter with your family online. Amber Rudd’s response to her daughters viral tweet is actually pretty funny and proves that even famous parents embarrass their kids from time to time.

On Oct. 23, journalist Flora Gill went semi viral after the guy she lost her virginity to and was then ghosted by got back in touch with some words of praise.

She wrote, “The guy that ghosted me 10 years ago on my gap year, after I lost my virginity to him, has just slid into my DMs to tell me I’m ‘the most accomplished person he’s ever slept with’ and I think this might be why I became a journalist. Quick I need the perfect response.”

Soon her followers came to her aid with witty retorts. But a response that got as much attention as the original tweet was from MP Amber Rudd, Gill’s mum.

Gill is the daughter of Rudd and her late husband A A Gill. She’s written for the likes of the Telegraph, GQ, and is a contributing editor at Tatler. Rudd was quick to suggest to her daughter, “Your mother would like to speak to him,” which has garnered more than 2,000 likes so far. Now that’s one phone call I’d love to hear.

Talking about sex with your parents is awkward at the best of times, let alone publically on Twitter with your mum who is a very well known politician. Gill replied, “Mum — I'm only kidding! I've never had sex! I'm an innocent, young, virgin sex writer.”

Fellow MP Stella Creasy gave Gill some words of comfort and wisdom. She wrote, “Take it from me @FloraEGill as have learned the hard way doesn’t matter what you do in life, if you mother is following you on Twitter it always ends in awkward conversations at Christmas …..still hope you responded to him with ‘who dis….” She’s not wrong.