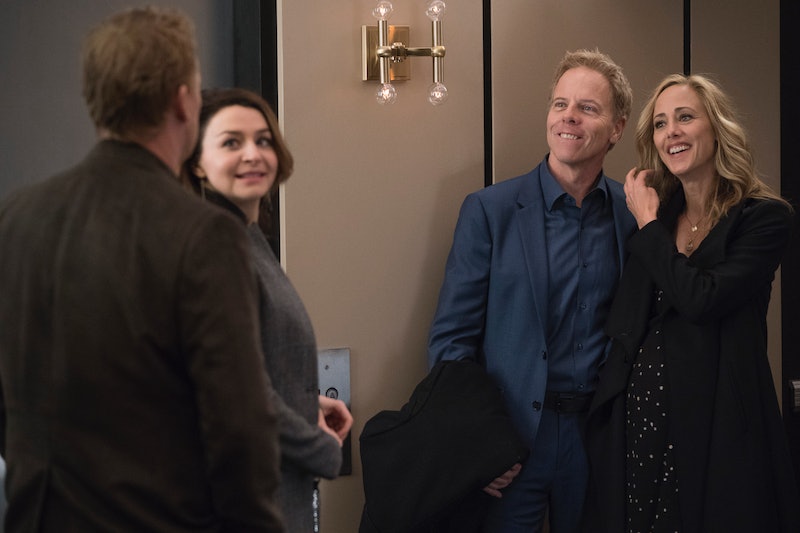 Throughout the past 15 seasons, Grey's Anatomy has produced some truly epic romances. Derek and Meredith, Cristina and Burke, Callie and Arizona: these duos have set a high standard for TV couples worldwide. That's why you may have started to find yourself rooting for Owen and Amelia or Owen and Teddy, depending upon where your loyalties lie. It's only natural to get caught up in the love triangles only this show can provide. However, I'd like to argue why a Amelia and Teddy's friendship on Grey's Anatomy should be the one pairing we're all rooting for. Sorry, Owen, but you and your flip-flopping emotions need to be put on the back-burner.

Some fans may take offense with this notion, especially longtime shippers of Owen and Amelia or Owen and Teddy. Both couples have been teased throughout the series while never really amounting to a longterm relationship. Sure, Owen and Amelia got married at one point, but even that didn't end up lasting for very long and has since been written off as a symptom of a brain tumor which is not a ringing endorsement, to say the least.

Since then, Owen has been pretty back and forth about who he wants to be with to the point where I'm not sure he even knows what he wants right now. But that's where the problem lies: this storyline shouldn't even be about Owen. Instead, the love triangle should shift gears and focus on the budding friendship Teddy and Amelia could have if Owen and his man baby emotions would stop getting in the way.

To be clear, it's worth mentioning that I used to like Owen a lot. He was never one of my favorite characters (I'm forever a Cristina Yang stan), but his presence didn't bother me by any means. Yet this season he's definitely started to rub me the wrong way, not only by how he's constantly shamed Betty/Britney's struggles with addiction in front of Amelia — knowing full well her own history of drug dependency — but also how he's now trying to control who Teddy spends her time with.

Lately, she's been dating Koracick and Owen has had no qualms in making his feelings about that known, even going so far as to throw a full-on temper-tantrum at Jackson's house party. Owen may be the father of Teddy's unborn child, but that doesn't give him the right to dictate her life, nor is it fair for him to expect Amelia to simply trust that he won't leave her for Teddy once the baby is born. She's not being overly emotional or insecure about the changes happening in his life — she's being realistic. And the fact that he can't see that only further proves how self-centered he's become.

So instead of catering to Owen's needs, I think the show should start pivoting toward how great Teddy and Amelia are without him. A few weeks back, these two characters set aside their current drama when Betty/Britney became hospitalized and it was so great to witness what a fantastic team they would make if they didn't have all this extra baggage (aka Owen) hanging over their heads. They are both two strong, independent, badass surgeons who deserve to be more than Owen's emotional punching bag.

He has every right to want a family, but he shouldn't expect both of these women to be waiting in the wings for him to decide who he wants to do that with. So let's stop making this storyline about Owen and give these ladies the support system they need: each other.