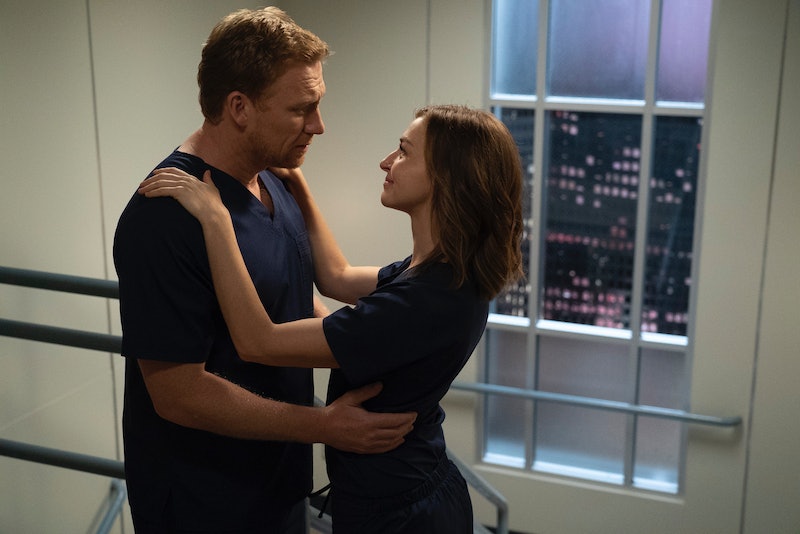 Amelia and Owen's relationship on Grey's Anatomy has been quite the journey. Their ups and downs have been dramatic, tear-jerking, and at times exasperating. They've gotten married, gotten divorced, endured a mind-boggling brain tumor, wanted children, not wanted children, and began fostering a teenage drug addict and her baby just as Owen's ex returned, pregnant with his child! You know, just the typical drama that comes with any relationship. It's unclear if Amelia and Owen will stay together on Grey's, especially after the life-changing news from Teddy, but honestly, maybe a split would be for the best.

The last episode ended with Teddy insisting Owen didn't need to leave his life with Amelia in order to be involved with their baby, and then Amelia telling Owen that she was going to allow him to "consider all his options."

A new clip from TV Guide for the next episode features Teddy and Owen are fighting about the specifics of exactly how their situation is going to shake out. Teddy's vying for a job at Grey Sloan, and Owen is angry that she waited so long to tell him about the pregnancy. Amelia walks over just soon enough to hear Owen say he's in a "crap situation," and she takes the slight very personally. Like all storylines involving Owen and Amelia, something tells me this whole thing is going to go on for a while.

Owen has been in limbo with both of these women since the dawn of time, though his full history with Teddy goes much further back. They served in the military together, and always had feelings for each other, but Owen was engaged for some time (remember Beth?) and they never confessed anything to each other. Then he was married to Cristina, and Teddy was married to Henry, and even when they were both long removed from those relationships, they still couldn't quite make things work.

Plenty of fans think that Teddy and Owen are the show's endgame plan, given their history, but others have loved Owen and Amelia's chemistry since they've started co-parenting their foster kids. There's even a more radical third option aside from Owen pairing up with one of them for good — perhaps they could all just part ways! Do Grey's Anatomy characters realize they're allowed to opt out of a relationship that's causing them stress, or even more daring, date people outside their place of work?

Owen and Amelia have been back and forth so many times, arguing over everything from the very basics of their relationship to whether or not they should marry and have children. Amelia had a tumor that was clouding her judgment, sure, but it feels like their plotline may have run its course for good, especially if Grey's Anatomy refuses to just let them be.

With how much Owen has always wanted children of his own, Amelia might understand that he wants to pursue his family with Teddy. But on the other hand, Teddy's been relegated to the sidelines of Owen's life for some time now. She's always been worried about being his second choice, whether she was competing with Beth, Cristina or Amelia, and there's the possibility that she'd feel like Owen was only with her out of obligation because of the pregnancy. Teddy deserves someone who truly loves her and who chooses her first every time, not a man who's tried and failed to give her what she needs so many times in the past.

Everyone involved in this bizarre love triangle deserves better, so naturally, the show will probably force them to cling to the drama as long as possible. Hopefully all three of them eventually come out on the other side with a solution that makes everyone happy.