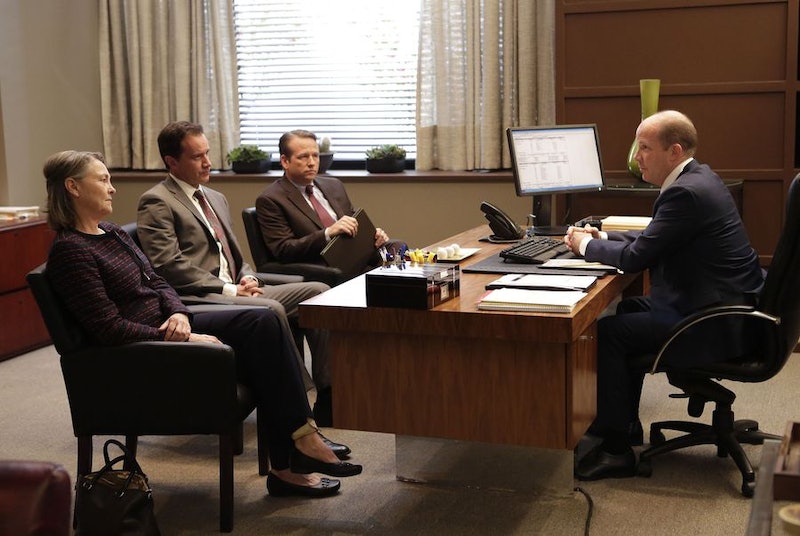 Set against the backdrop of North Carolina's suburban farmland, American Crime Season 3 has introduced viewers to a number of marginalized characters. The plot is driven by various forms of human trafficking, with a focus on undocumented immigrants who are forced into agricultural slavery and teens who are prostituted by people who supposedly love them. After two episodes of the anthology's latest installment, one thing is clear — American Crime's Season 3 themes of racial inequality, xenophobia, and women's rights will provide us with an unflinching look at what it's like to be treated as property in America.

By focusing on the workforce aspect of inequality, American Crime is able to touch on how a wide range of people are impacted by prejudice in America. “The main thing we wanted to tackle is the exploitation of the workforce in America and how people are working to survive and how they’re barely doing so,” executive producer Michael McDonald told Variety. “Modern-day slavery does exists [in America] and we close our eyes to it." He added that the season will spend a good deal of time examining "what it looks like to not have power."

We certainly caught our first painful glimpses of powerlessness in the premiere. Benito's heartbroken distress when he realizes his son is in danger and Shea's somber resignation that her pimp has no concern for her physical safety (provided he receives his payout, of course) are both moments that pack a serious punch.

The deepest level of powerlessness depicted on American Crime, of course, comes from the characters who are treated like property and reduced to objects rather than human beings. The migrant workers are held as modern slaves and told they should be grateful for the food on the table and the clothes on their backs. The show's unflinching depiction of modern slavery sends a painful but much-needed message — the days of turning human beings into property in the United States most definitely didn't end with the Civil War, and we still have so much work to do as a society.

Meanwhile, to their pimps, the teenage sex workers on American Crime are objects to be rented out for a paycheck. Of course they don't get a cut for any of the work they're forced to do — after all, objects aren't meant to be treated like human beings.

There's a very different form of powerlessness shown as well — Kimara (Regina King) devotes her life to helping teenagers like Shae, but her efforts are frequently rebuffed. There's a profound feeling of powerlessness when a social worker's best efforts just aren't enough to convince a teen to accept help — and, after this many years on the job, Kimara knows that for the one teen she manages to save, 20 more frightened victims will immediately crop up in her place.

It will also be interesting to watch the character of Jeanette (Felicity Huffman) this season. She expresses distress in the premiere when she can't help her own sister, and in the March 19 episode her instincts about the fire lead her directly to the living quarters of the workers — and she's visibly horrified and shocked by what she sees. Jeanette could be the key to orchestrating some sort of positive change on the farm, but will she risk the anger of her family and do the right thing? With the strong focus on powerlessness this season, it will be equally interesting to see what the characters who are given power choose to do with it.