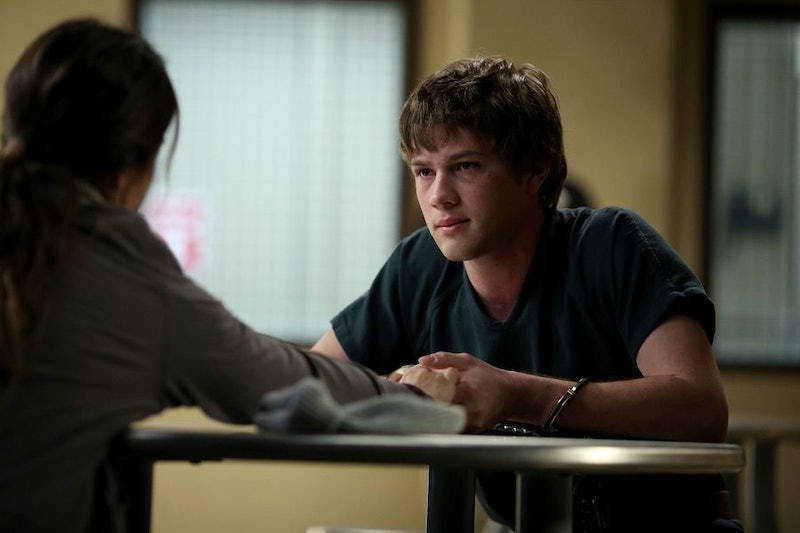 Is there anything worse than tuning into the season finale of a beloved show with no knowledge of whether that show will be renewed or cancelled, and thus being unsure if what you're about to watch might be the last episode you ever see? (Answer: yes, there are worse things but bear with me here.) Fans of ABC's anthology series American Crime must be struggling with such feelings of anxiety today, as they prepare to watch the Season 2 finale of the critically acclaimed drama. The network recently renewed a whopping 15 shows at once — but this sadly wasn't one of them. So will American Crime be renewed for Season 3? Or is this Wednesday's Season 2 finale really a series finale? Update: On May 12, ABC renewed American Crime for Season 3, as reported by Deadline.

Earlier: Since ABC has yet to officially announce a verdict for the show, obviously we can only make a guess based on numbers… and unfortunately, those numbers aren't looking too good. When American Crime was renewed for a second season last May, it came as something of a surprise due to its low ratings; and this year, its ratings are even lower. Just two days before that renewal was announced, typically reliable website TVByTheNumbers, which tracks the renewal odds of all broadcast TV shows, had American Crime slated as having literally zero percent chance of coming back for a second go-round.

As we all know, American Crime DID come back. But last year the series was averaging 4.98 million viewers per episode; this year, that average is down substantially to only 3.72 million viewers each week. For the first nine episodes of the 10-episode season, American Crime has averaged a rating of only 0.94, putting it below the already-cancelled freshman series Wicked City (which was averaging a 0.96 rating when it got the axe).

And those lower numbers are in the face of lighter competition, to boot. In Season 1, American Crime took over How To Get Away With Murder's time slot when that show finished its first season, airing on competitive Thursday nights during the middle of the spring TV season, from March through May. In Season 2, the show aired on Wednesday nights from January through March, in the middle of the dead winter season when most shows were on their midseason hiatuses. (Hiatusi?)

However, I didn't come here just to rain on your parade — there is actually some good news, believe it or not. Despite the fact that TVByTheNumbers gave American Crime a zero percent chance of being renewed last year and this season is averaging even lower numbers, the site currently has the show ranked as not "certain" or even "likely" to be cancelled… but rather as a "toss-up." That's because last year's renewal flew so in the face of logic that the decision could conceivably go either way this year, even with such low numbers.

American Crime's Season 1 renewal came after its eighth episode, which boasted literally the lowest numbers of that whole season, its viewers down to 3.63 million from the season premiere's 8.37 million, and a paltry 0.9 rating. Even when the show ticked back up for its Season 1 finale, it still came in third out of three in its time slot, behind CBS procedural Elementary and an episode of NBC's Dateline. So clearly ABC's vote of confidence had nothing to do with the show's numbers.

So why DID American Crime get renewed last year? Simple: it's one of the most prestigious programs the network currently airs. The show was created by an Oscar-winning screenwriter (12 Years A Slave's John Ridley), it got glowing critical reviews, and it went on to earn three Golden Globe nominations and an impressive 10 Emmy noms (including one win for Supporting Actress Regina King), making it the most-nominated show on all of ABC. This year, the show somehow got even better reviews and will likely fare just as well come awards season — so there's reason to be hopeful that the network will continue milking American Crime for its prestige as long as is financially possible.

However, even if this does prove to be the final season of Ridley's insightful drama, there are still plenty of things to be thankful for: that we already got two terrific seasons out of such a low-rated show, and that American Crime is an anthology series… which means that this season's storyline will be wrapping up with this Wednesday's finale, as was always intended. There will be no agonizing cliffhangers, no unresolved character arcs, no lingering questions; if the show does return for a Season 3, it will be with a completely new plot, location, story, and characters.

We should know the fate of American Crime by May at least, when all the networks announce their renewal/cancellation decisions at network upfronts. If it does snag a Season 3 renewal, then we can expect to see the show return sometime in early 2017; likely during the midseason hiatus again like this year. In the meantime, all we can do is enjoy the Season 2 finale and cross our fingers that ABC won't commit an egregious crime by closing the case on American Crime.

More like this
It May Be A While Before 'All American' Season 5 Drops On Netflix
By Grace Wehniainen
Ava DuVernay Thought The 'Queen Sugar' Series Finale Felt “Really Satisfying”
By Brad Witter
The 'Dead To Me' Creator Says Her Series Finale Idea “Felt Very True To The Show”
By Brad Witter
Will 'The Walking Dead' Return For Season 12?
By Grace Wehniainen
Get Even More From Bustle — Sign Up For The Newsletter