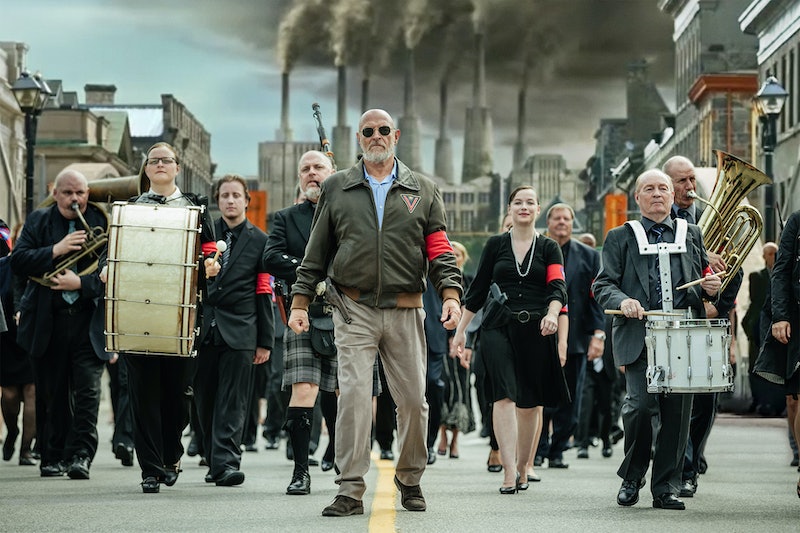 Mr. Wednesday is a charming Old God, but he can't win over everybody. Not even the perfect gift is enough for one guy. While he doesn't exactly betray him, Vulcan refuses to join Wednesday on American Gods and pays a hefty price for it. The once Roman god of fire and weaponry (played by Corbin Bernsen) has found a way to stay current and thrive in America, while Odin has not.

Why doesn't Vulcan need Wednesday and his cause? It's all too simple. As an Old God of fire and weaponry, he has easily found worshippers in the gun-obsessed modern America. Vulcan has found a way to become a New God. He "franchised" himself, he says. It's even implied that he is working with the New Gods, and that they tipped him off in some way. In Vulcan's town in Virginia, his followers ritualistically jump into the fiery pit, like a volcano, and then the town celebrates the sacrifice with guns blazing and a parade.

So, at the end of the episode, Mr. Wednesday kills Vulcan. He takes the blade that Vulcan forged for him, slashes his neck, and tosses him into the volcano like Gollum. Vulcan did say that he could benefit from a blood sacrifice but — way harsh, Odin.

Is that how it's gonna be? Is Wednesday willing to kill every Old God who won't join him? As twisted as Vulcan's cult following in Virginia is, isn't it somewhat admirable that an Old God found a way to be worshipped in the New World? He hasn't been forgotten, like Nunyunnini. It's an interesting philosophical debate.

Maybe Wednesday is just jealous, but the situation is a lot more nuanced than that. Vulcan has also embraced a materialistic aspect of deity-ism. From a humanistic perspective, what Vulcan has created is not pleasant or ideal. Perhaps Wednesday sees Vulcan as too corrupt to be on his side anymore. Either way, he has no use for him.

Remember that only one episode ago, Media and Mr. World tried to woo Wednesday by offering to have a missile named after him. But that's not how he wants to be remembered or worshipped. Odin may be a con in the New World, and often morally gray, but he has a code. Vulcan and his franchised faith don't make the cut.