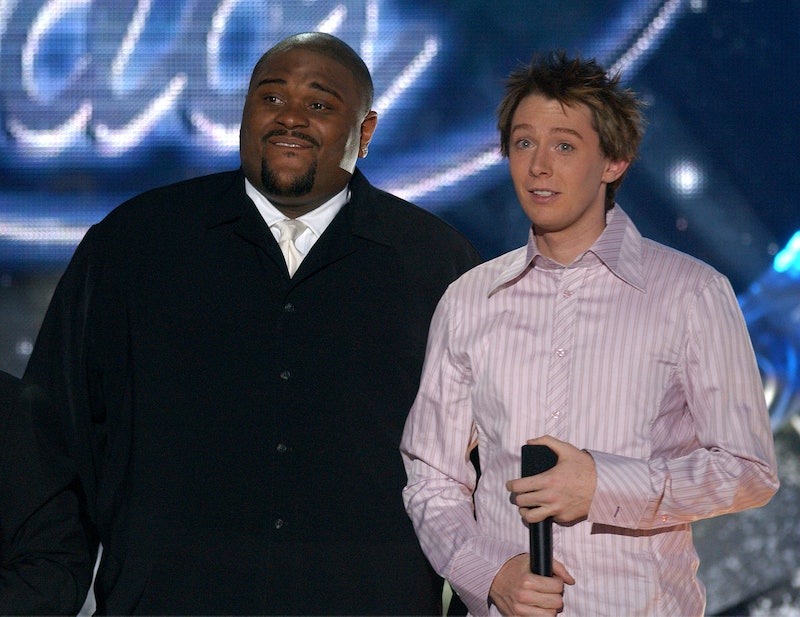 Clay Aiken and Ruben Studdard have come a long way since 2003. You know, back when you were watching them on your favorite singing competition, American Idol? Both had vastly different voices, and both ended up in the top two, with Studdard being voted the winner of Season 2 over Aiken. Now, 15 years later, they're putting the results of the show aside and doing a new show together. Clay Aiken and Ruben Studdard are coming to Broadway for the holidays and it'll be the perfect thing to get you ready for the holidays.

Starting Dec. 7, the two will be performing at the Imperial Theater in Ruben & Clay’s First Annual Christmas Carol Family Fun Pageant Spectacular Reunion Show (also known just as Ruben & Clay’s Christmas Show). The official opening is Dec. 11, and it'll run for three weeks through the holidays. It's described as a family-friendly variety show of sorts, incorporating many Christmas favorites, traditional and modern, and sketches starring the two American Idol alums. Tickets are currently on sale, and part of the proceeds will go to the National Inclusion Project, which was founded by Aiken and Diane Bubel and works to help ensure inclusion for children with disabilities in various programs.

Aiken and Studdard haven't appeared on stage since Studdard won the title of American Idol by 130,000 votes, but what better way for two to end a reality TV rivalry than with some Christmas cheer? "Christmas is about family, friends and fun," Studdard said, according to Deadline. "Clay and I can't wait to bring all those things together on Broadway this December."

Aiken shared that sentiment, calling this the perfect comeback to the stage for him. "There are really only two things that could get me back on stage after taking a break for over five years: my buddy, Ruben, and Christmas," Aiken said. "It's been 15 years since he beat me on Idol, and it's taken an entire decade and a half for me to lick my wounds. But the holidays are about togetherness, so now that he is older and I am wiser, I can think of no better way to celebrate 15 years of friendship than by spending this holiday season together on Broadway." Their joking and obvious friendship in the announcement clip show that this Broadway performance is going to be fun for everyone.

Of course, they're going to play on their "rivalry." As seen in the promo video and on their website (someone "crossed out" Studdard's name and wrote it in after Aiken's), it's going to be a running joke for them. It makes sense, since Studdard's win sparked controversy back in 2003 when reports of the final vote tally differed over time — Reality TV World reported that Seacrest said that Studdard won by 13,000 votes, then 1,335, then landed on 130,000. There were also rumors that millions of callers' votes weren't counted, fueling the narrative of a feud between Aiken and Studdard.

Despite all that contention, this holiday show is going to squash any rivalry rumors for good. So, if you're a fan of the American Idol stars, or just want a good, wholesome Christmas show, Studdard's and Aiken's show may be perfect for you.