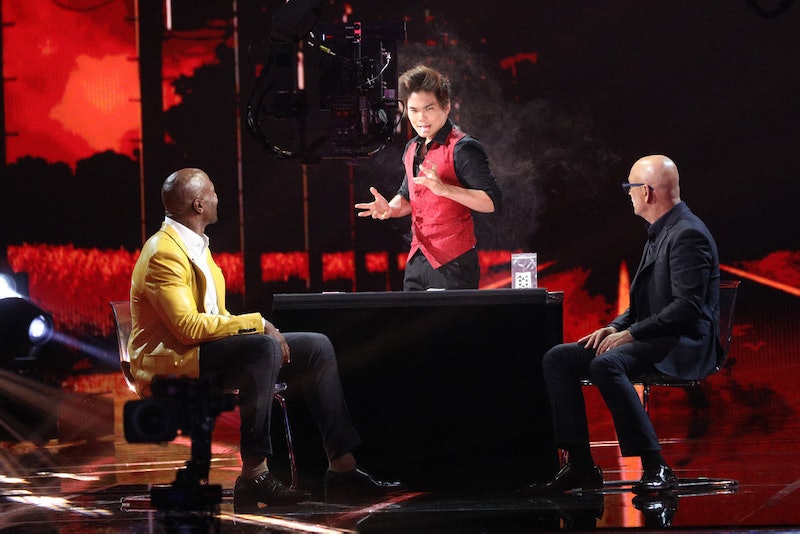 After 13 extraordinary seasons, America's Got Talent kicked it up a notch this year with the debut of Champions, a spinoff that brought together dozens of previous contestants to duke it out for the ultimate title. Plenty were deserving of the top prize, but when all was said and done, magician Shin Lim won AGT: Champions. And as any AGT stan knows well, it wasn't his first victory.

In fact, Lim won AGT Season 13, the show's most recent season, in September. So if you're still reeling from the show he put on less than a year ago, you're not alone: clearly, America still wasn't over his mind-boggling magic. According to People magazine, these two wins make Lim the first contestant to ever win two consecutive America's Got Talent seasons, and he seems thrilled with the honor. "It's crazy, to be honest. I still have to pinch myself. First winning AGT was crazy to me, but winning Champions was even more crazy. It's very overwhelming and super exciting," Lim said.

Lim specializes in card tricks, all of which are pretty unbelievable. The clip below from the finale, in which he enlists the help of Brooklyn Nine-Nine star Melissa Fumero, is enough to leave anyone stunned.

Host Terry Crews told USA Today that he was just as baffled by Lim's tricks as anyone. "He's incredible," Crews said. "I was trying to catch what he was doing. I was watching cards disappear in his bare hands and I was like, 'What in the world?' You know it's a trick, but he was fooling me every time."

Lim seems super humble, and has even gone on record saying he thinks other people deserved the prize just as much. "Darci Lynne deserved it," Lim told USA Today of Darci Lynne Farmer, the ventriloquist who came in second place. "She can sing, she can do comedy, all with her mouth closed. That's almost like me doing magic without my hands. … And she sang opera, for God's sake."

Still, Lim is no slouch, either. Here's another trick he pulled off on the show while Crews and judge Howie Mandel watched in awe.

Needless to say, viewers at home certainly thought he was deserving of the win. Some on Twitter even took to calling him one of the best magicians of this generation.

And while the exposure of national television can't hurt, Lim is making a name for himself outside of AGT, too. He'll be in Las Vegas at the Mirage for several dates throughout summer 2019, and has a couple other stops coming up in just a few short weeks, according to his website. If you're a really dedicated fan, you can even score some Lim merch on his site.

Lim has already made history with his pair of AGT victories, and seems to have big plans for the future. He's wowed audiences two seasons in a row, and now it's time for us to sit back and see what he does next.

More like this
Yes, That Is Victoria & Another ‘BiP’ Alum In Zach’s ‘Bachelor’ Trailer
By Kadin Burnett and Grace Wehniainen
A Former 'Strictly' Star Is Set To Make A Sensational Return To The Show
By Bustle UK
Why Wasn't Teddi At The 'Bachelor In Paradise' Reunion?
By Brad Witter
BBC’s Gladiators Reboot Is Staying Close To The Original ‘90s Phenomenon
By Sophie McEvoy
Get Even More From Bustle — Sign Up For The Newsletter