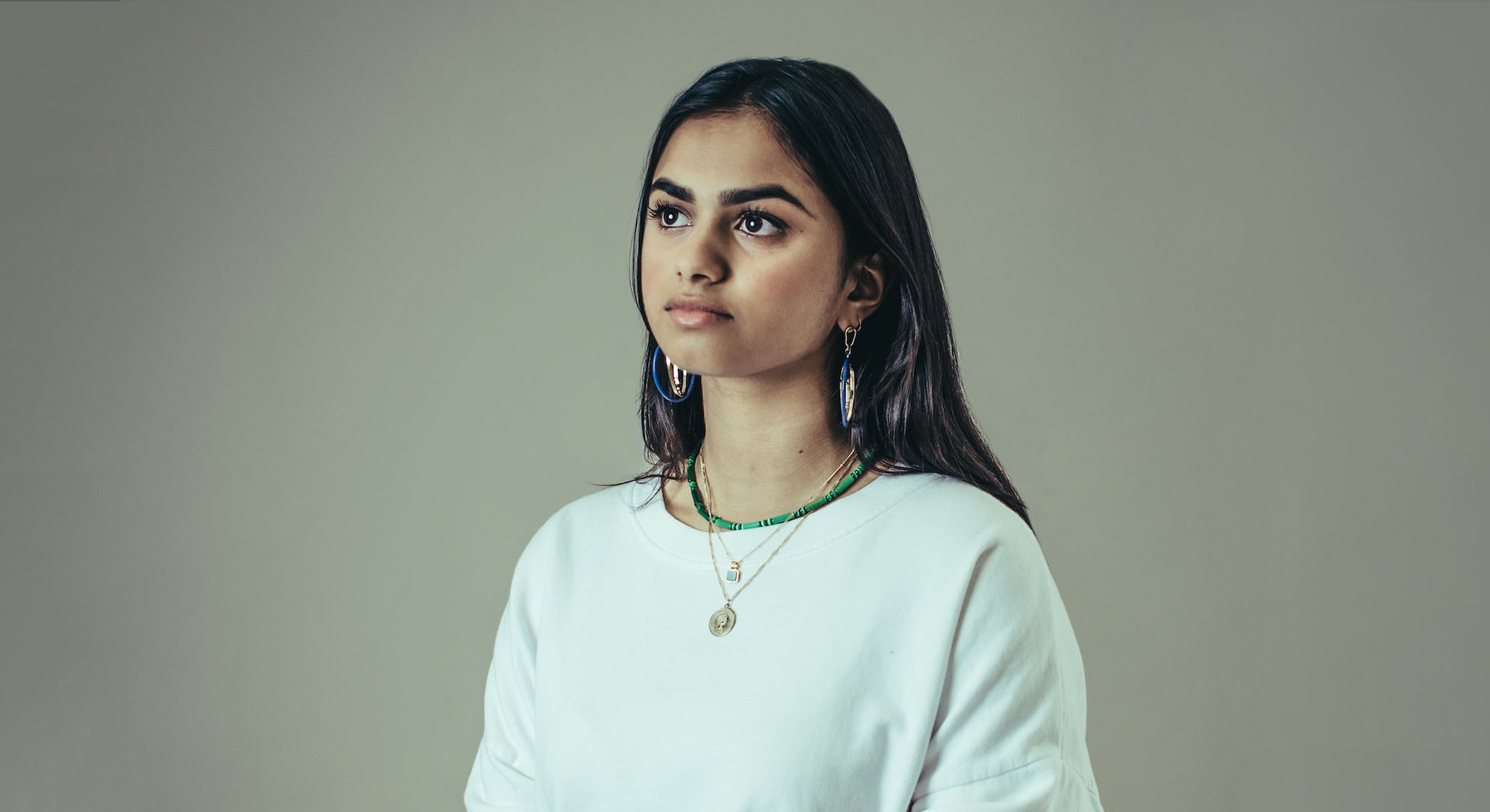 Activist, campaigner, and Free Periods founder Amika George walks a tightrope between being a completely ordinary teenager and an entirely exceptional one. On one hand, the 18-year-old North Londoner is currently ploughing her way through Martin Pugh's hefty State and Society: A Social and Political History of Britain Since 1870, in preparation for taking up her place reading history at Cambridge in October. On the other, she's concerned whether she'll get through it because "the next few weeks are pretty intense." The intensity to which she's referring is a trip to New York, during which she'll be given the Campaign Award at Goalkeepers, an event hosted by the Bill and Melinda Gates Foundation celebrating global change makers. Probably more exceptional than ordinary, if we're being honest, then.

George founded #FreePeriods in 2017 in an attempt to tackle period poverty in the UK. "It really felt like there was this huge issue and girls were really suffering in silence," she tells me. It was recently reported by the Independent that 137,700 girls missed school in 2017 due to not having sanitary protection, while an October 2017 survey by Plan International and reported by BBC News found that one in ten British women between the ages of 14 and 21 couldn't afford sanitary products. "What horrified me even more was that, even though it was in the media and everyone was talking about the fact that it existed, the government wasn't responding, wasn't doing anything to stop it," she adds.

It's this lack of government engagement that's still problematic today. George's December 2017 #FreePeriods protest saw 2,000 people gather outside 10 Downing Street, including high profile voices like actress Suki Waterhouse, supermodel Adwoa Aboah, and actress and influencer Tanya Burr. Her petition has been signed 180,000 times. Such was the anger at tampons being taxed as a "luxury product" that the government took the step of announcing that funds raised against purchases would be funnelled to charities supporting women. It pretty unanimously agreed that period poverty is something we need to fix, so why haven't things changed?

"It has been difficult emailing MPs and doing media stuff, and then not really hearing anything from the government in response."

While George admits there's "quite a lot going on in British politics at the moment," she points to the fact that 70 percent of MPs are male and the limitations that creates. "I read about an MP who refused to say the word tampon in parliament," she explains. "When you have issues like that, and gender inequality is still rife, it feels like it's a slow process to get it moving."

Converting men into allies is an important part of her activism. "When men do support the campaign it's almost more valuable just because it's rarer," she admits. "It's wrong, but you do think of a man talking openly about periods as a really woke thing, or a really progressive thing, but I do think it's up to us to talk to men about periods and educate them on an issue that they may not know anything about."

This educating process can be challenging, and for an 18-year-old student, George shows an admirable resolve in dealing with the trolling that comes along with life in the public eye. "There are definitely people you meet online who will tweet certain things saying, like, 'Oh, why are you tweeting about periods when I'm trying to have my dinner?' or 'Typical teenager she wants everything for free.' Obviously, that's quite hurtful," she tells me.

She also has to do battle with those who don't believe it's the government's place to intervene. During a recent radio interview about Milton Keynes Council's decision to distribute free menstrual products in schools, George was confronted by two vocal critics. "They were making really harmful generalisations like, 'I'm sure that the parents of these girls spend all their money on cigarettes and alcohol.' Or, 'These girls have iPhones.' I've heard that before, but also coming from women, it was really awful and quite demoralising," she explains. Her response — to calmly put forward her point of view — surely took no small measure of composure.

"I really hope that being on a platform like Goal Keepers will help put period poverty on the agendas of government all around the world."

This fortitude and resolve is surely what's enabled her to make her campaign part of the global conversation. The award she will receive at the Goalkeepers event on September 25 is proof of that. "I feel like I’m there representing everyone who worked hard on the campaign," she explains. "Just by posting or tweeting about the campaign on social media. Every bit has had an impact, so I really feel it’s not just me, it’s a collective asset."

Currently Reading 📚 "Feminists Don't Wear Pink by Scarlett Curtis. I wrote an essay for it. It's coming out on October 4, my birthday. It's a collection of essays by 52 incredible women and I'm just finishing that, it was so inspiring."

Currently Listening To 🎧 "I listen to quite a lot of podcasts. I've been listening to The Guilty Feminist with Deborah Frances-White. I think she's really funny. Also, I really like a podcast called Revisionist History by Malcolm Gladwell, which is really cool."

How To Take Action 🎤 "Use your social media. By signing a petition, tweeting about it, posting on Instagram, or whatever — those little steps do make a big difference. On the Free Periods website you can also write directly to your MP or tweet your MP and tell them to take notice of the issue."