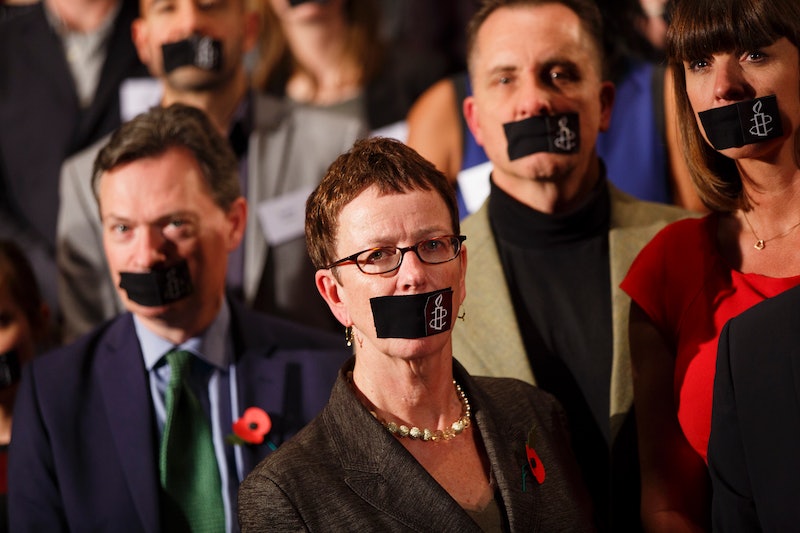 A new annual report released Wednesday by Amnesty International issued a dire warning for global politics, stating that the "toxic" political rhetoric taking hold worldwide could have detrimental effects on human rights. The report singles out leaders like the Philippines' Rodrigo Duterte, Hungarian Prime Minister Viktor Orban, and Donald Trump for their anti-immigration and "otherizing" rhetoric that seeks to redefine governmental norms without the consent of their people.

"More and more politicians calling themselves anti-establishment are wielding a toxic agenda that hounds, scapegoats and dehumanizes entire groups of people," Secretary General of Amnesty International Salil Shetty said in a statement that was released along with the report. The report also called out former president Barack Obama too, stating that some of this worldwide political deterioration is partially due to his "many grievous failures to uphold human rights."

The rise of populist and "strongman" leaders is particularly concerning because it's part of a historical pattern that could have disastrous effects if repeated. In the 1930s, Europe became susceptible to a similar kind of authoritarian leadership due to economic instability and xenophobia, which in turn led to World War II and the most infamous genocide in human history. Trump in particular has prompted comparisons to Adolf Hitler, for his manipulation of the American media and insistence on his self-proclaimed unique ability to solve the country's problems.

It feels pretty easy to say that the world would never let those things happen again, but as the report indicates, human rights abuses of a similar scale aren't too far off. 36 countries violated international law by sending refugees back to the country where their rights were being threatened.

Australia was specifically condemned for its use of offshore detention centers, where refugees have committed acts of self-harm to protest or escape their life in limbo. Amnesty International's report is a stark and painful reminder that humanity is not immune from repeating its mistakes, and that human beings are currently suffering from geopolitical inefficiency and indifference.

The global fight for human rights will continue long after this geopolitical moment, but it's crucial to heed this report and not lose any of the progress made in recent years. Although private charities and public awareness can never truly replace governmental action when dealing with crises of this size and nature, individual vigilance is the best tool people have to create change. Electing new leaders who run on human rights platforms and pressuring current leaders to focus on these issues is the world's best hope for stemming this potential humanitarian disaster.