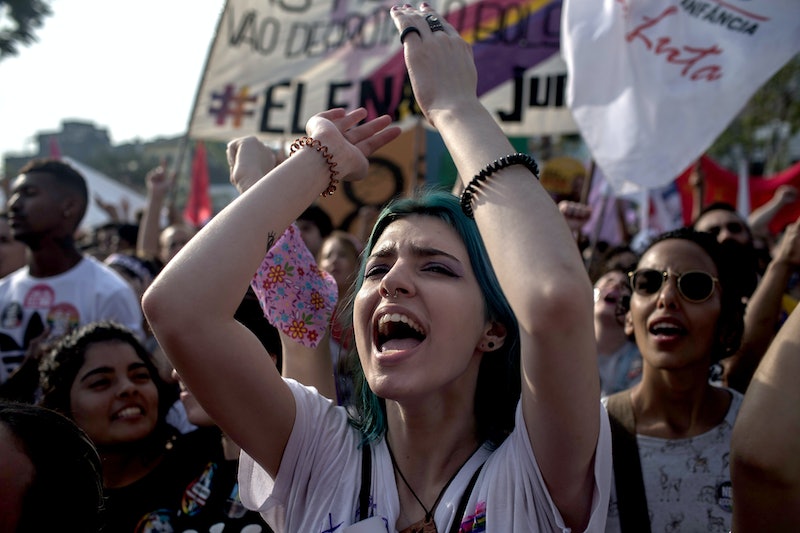 In 2018, women around the world led the charge against sexist, racist, homophobic, and otherwise oppressive policies. They challenged gender-based violence through the #MeToo and #NiUnaMenos movements, were on the front lines of reproductive justice efforts, and risked their lives to expose human rights violations in various countries. In a new human rights review released on Sunday — in honor of Human Rights Day on Monday — Amnesty International highlighted women's activism and explored why so many women are rising up now.

According to Amnesty International's new review — which commemorates the 70th anniversary of the Universal Declaration of Human Rights— “tough guy” world leaders who have exemplified toxic masculinity have not only passed new oppressive policies, but also launched renewed threats on rights that previous generations of activists fought for and won.

As a result, women on multiple continents have developed ways to fight back — especially because these same world leaders frequently relegate women's rights to a lower rung on the ladder of social and economic justice, according to Kumi Naidoo, the Amnesty International secretary general.

“Worse still, many of the current crop of leaders in the world have launched fresh attacks on women’s rights with their misogynistic and divisive narratives," Naidoo said in a press release emailed to Bustle. "These leaders try to argue that they are protecting traditional values that represent family interests, but the truth is, they are pushing an agenda that denies women basic equality.”

Throughout the year, women's rights activists challenged numerous injustices, according to Amnesty International's review. In Saudi Arabia, women fought for the right to drive, while in Argentina, Ireland, and Poland, they challenged anti-abortion laws and fought for improved reproductive health care access.

In the Middle East, a Palestinian teenager named Ahed Tamimi was imprisoned after protesting Israeli occupation, and in Brazil, an activist named Marielle Franco was murdered after standing up for human rights. At the U.S.-Mexico border, migrant women from Central America launched a hunger strike to demand an expedited asylum process, and indigenous groups both in North America and around the world fought for environmental justice and called for investigations into missing and murdered indigenous women.

There are countless examples of women and women's groups fighting for change around the world, according to Tarah Demant, the director of Amnesty International USA's Gender, Sexuality, and Identity program. Per Demant, this notable increase in women's activism can be attributed to a "growing global visibility ... of the reality women have long faced."

"Their rights are constantly under attack and their voices are routinely subjugated," Demant tells Bustle. "Nowhere has the struggle for equality this year been louder or more visible than in the fight for women’s rights. Globally, women activists have been at the forefront of the battle to ensure that we all can exercise our rights. Yet at the same time, the stark reality is that, even in 2018, many governments openly support policies and laws that subjugate and suppress women."

It is important to celebrate this "stratospheric resurgence of women’s activism," Amnesty International argued in its review, but it is impossible to do so without acknowledging why so many women are mobilizing at this particular moment. 2018 was a year full of women shattering records, making history, and fighting for their rights — but only because these rights faced renewed threats from repressive governments around the world.

This dichotomy was clear in various global movements, according to the review. Millions of women mobilized with the #MeToo movement — because their concerns about sexual violence were not being taken seriously. In countries where women were fighting for the right to safe, accessible abortions, they were doing so because of rigid anti-choice laws. Women risked their freedom from Iran to Japan in order to expose and protest injustice, because the alternative was to accept even less freedom.

"Women are particularly poised to lead in the work of human rights," Demant tells Bustle. "Women bear the brunt of inequality, but they are also leading the charge for change."

Despite facing increasing resistance from their governments, anti-choice groups, and right-wing extremists, women's rights activists have been quite successful in illustrating that women's rights are not independent of other human rights. In Ireland, voters were able to repeal one of the world's most restrictive abortion bans, while in Latin America, #NiUnaMenos has inspired many women to combat femicide, sexual assault, and other forms of gender-based violence.

"Part of the success of women has been that many women’s movements build grassroots and community power," Demant says. "But also, we’ve seen women show how unafraid they are: demanding the rights they deserve."