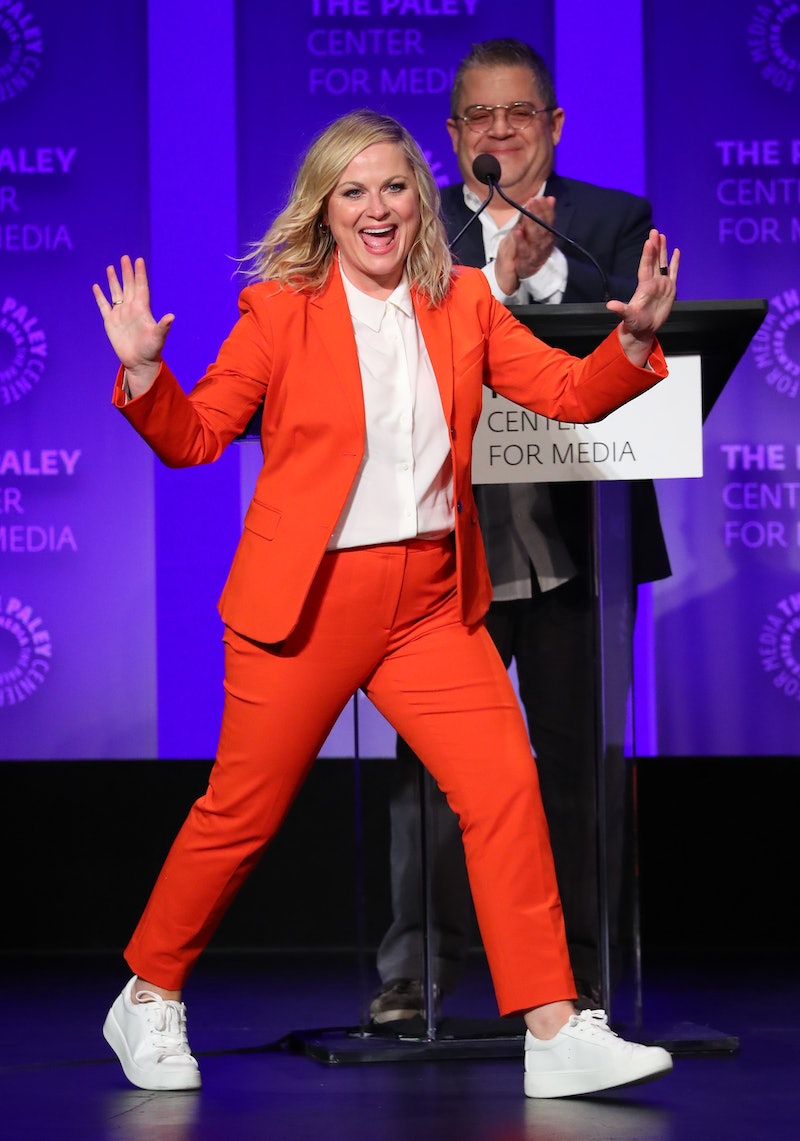 Amy Poehler's directorial debut didn't leave her much to wine about. In fact, for Poehler, directing Netflix's Wine Country hit pretty close to home. Not only does she star in the upcoming comedy (available to stream on Netflix beginning May 10), but she also got to act and direct with some of her best friends and fellow Saturday Night Live alumni, including: Tina Fey, Maya Rudolph, Rachel Dratch, Ana Gasteyer, Paula Pell, and Emily Spivey. Oh yeah, and the Wine Country plot is also even based on an actual real-life getaway that the women took together to California's Sonoma County a couple years ago.

"I like to brag that we had 20 years of rehearsal basically," Poehler told The Hollywood Reporter in a new cover story interview. She also had high praise, of course, for her powerhouse roster of some of comedy's funniest actors, adding:

"A lot of my work [as a director] was slowing everybody down, reminding them that they didn't have to come in and score. Because these ladies are assassins. They parachute in to other people's movies and they're the funniest part of the movie. They just kill. But many of them have not necessarily been in the entirety of a movie, with a continuing arc that we're going to stick with."

Even with a few small kinks to work out, Poehler kept things light on set with her gal pals. While describing the mood, she even threw a comedic barb at Academy Award-winning director Francis Ford Coppola. "Unlike Coppola, I did not drive anybody to have a heart attack on the set," Poehler joked to THR. "It was the anti-Apocalypse Now." (For those who might not know, Martin Sheen famously suffered a heart attack while filming the heavy 1979 war drama, according to Rolling Stone)

The subject matter of Wine Country is decidedly much more lighthearted, of course — though the "hilarious and heartfelt" movie will still have some drama between friends. Per Netflix, the film will feature the women celebrating a 50th birthday party in Napa Valley, where "the alcohol flows, real world uncertainties intrude on the punchlines and gossip, and the women begin questioning their friendships and futures."

Poehler's comfort in the director's chair trickled down to the cast as well — and all the love was mutual. As Rudolph recently explained to Vanity Fair, “We already have this common language where we can set each other up ... And that was also part of the delicious goal of this: why not work with these people that you love working with, that you do not have to question?”

Poehler also saw the benefits of working with such strong women — even if some of them were stunt actors. For one scene in which the women all end up rolling down a hill, Poehler told THR that they hired six "hardcore, bad*ass women," who, she joked, had to roll down "like 65 hills."

Amplifying the voices of under-reprsented demographics in mainstream media is something Poehler has long done and plans to continue to do with her followup directorial project, a Netflix adaptation of author Jennifer Mathieu's 2017 YA novel Moxie.

"We're going to have a lot of super young voices. And it's going to be a completely different experience from Wine Country," she also shared with THR of what she called "a coming-of-rage story."

Whatever kinds of stories Poehler decides to tell in the future, her fans are absolutely here for all of them.

More like this
Claire Foy & Rooney Mara Revisit A Devastating Tale In 'Women Talking'
By Bustle UK
Amanda Gorman Shared A Powerful Message On Meghan Markle’s Penultimate Podcast
By Darshita Goyal
The 'Love, Lizzo' Harry Styles Scene Is Just 1 Moment That Made Fans Feel Seen
By Brad Witter
Robert Downey Jr.’s New Film Is A Tender Story of Fatherhood & Forgiveness
By El Hunt
Get Even More From Bustle — Sign Up For The Newsletter