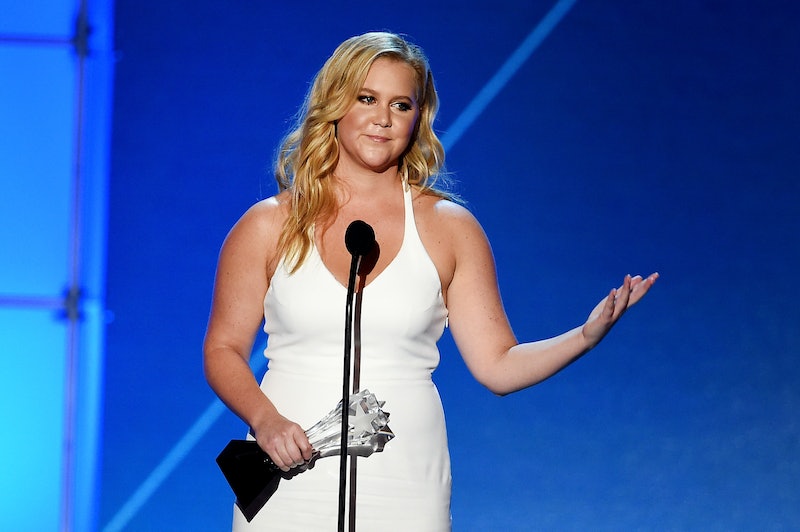 It may seem like celebrities have it easy given their fame and fortune and all. However, the encouraging phrase "let your haters be your motivators" applies to even the most outspoken actors and confident comedians. Amy Schumer posted a thank you note to trolls on Instagram on March 15 in response to the internet trolls who purposely posted negative reviews of her latest Netflix standup, The Leather Special.

Although she initially took the naysayers to task for congregating in sub Reddit rooms and plotting to drag her ratings, Schumer wrote that she finds the experience to be empowering rather than upsetting. "I thank you trolls so much. It fills me with hope and power to see you all furiously posting so as always accuse me of whatever lies you want. Call me a whale. Call me a thief and I will continue to rise and fight and lead."

According to an article on Splitsider.com, which Schumer references, an alt-right sub Reddit group called "r/The_Donald" was pushing followers to "give Schumer's 2016 book a bad review on Amazon" and "give her special a one-star review."

Schumer continued, "I know who I am. I am strong and beautiful and will use my voice my whole time on this earth."

She also noted, "I am so proud of my special and grateful to all of the people spreading love on line about it." One of those supporters is actor America Ferrera who reposted Schumer's Instagram post. Ferrera praised her for "speaking up in the face of what wants to silence your power," and encouraged her followers to be as "unwaveringly devoted to yourself" as the Trainwreck star.

Although the moral of this story could be "haters gonna hate," Schumer is reclaiming her narrative by being confident and standing up for herself, and showing others that in the face of trolls, it's possible to come out on top. There's no joke in trolling people, but Schumer's tenacity will always help her get the last laugh.