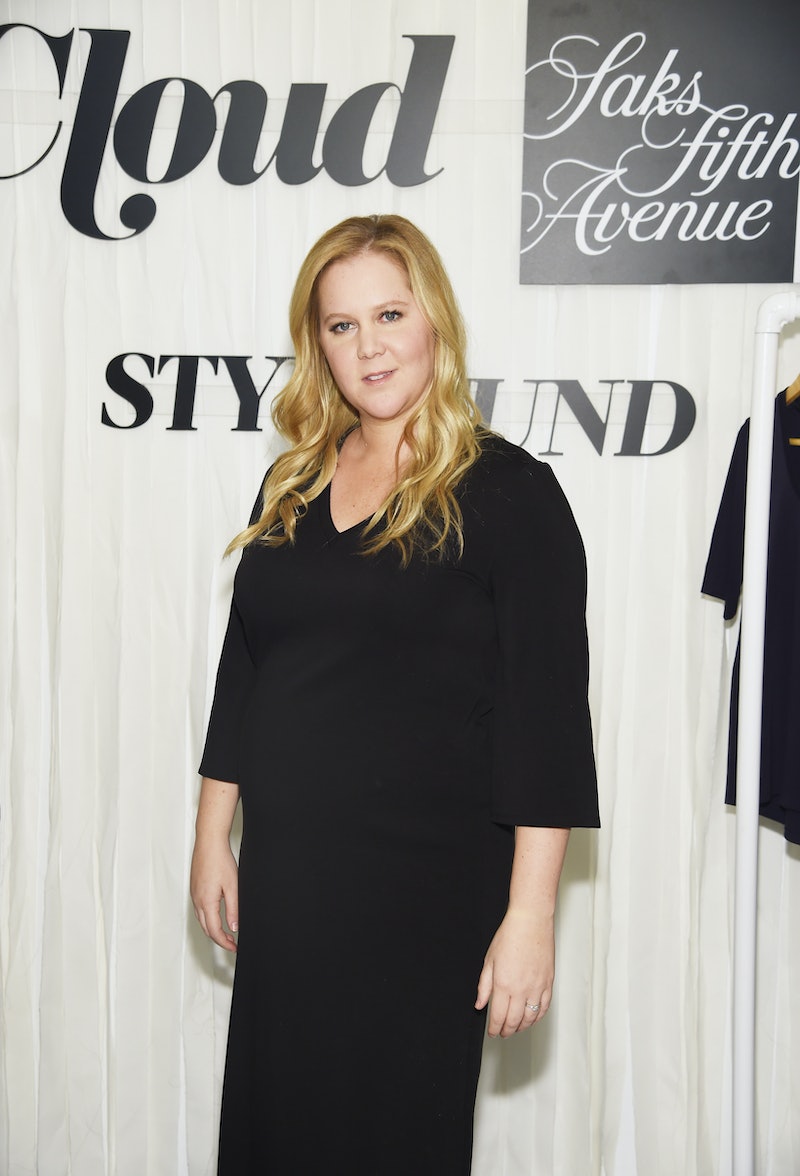 While some birthdays can be cause for wild parties or outlandish celebrations, Amy Schumer is taking a different approach for her 38th. On Saturday, June 1, Schumer celebrated her birthday with her newborn son in what was undeniably a low-key affair. The I Feel Pretty star posted a photo from her bed on Sunday where she can be seen lounging with her son Gene, who was born on May 5, while her dog sits nearby.

"This sh*t is (bananas emoji)," Schumer captioned the photo, perhaps in reference to how much her life has changed since becoming a mom. A couple of hours before, Schumer had posted a blurry photo of partygoers decked out in different costumes with the caption, "Today was the best birthday ever! I'm not in this picture and I don't know these people but it was such a nice birthday."

Schumer posting about the relaxed vibe of her birthday is the latest way she's been transparent about her transition to motherhood. The comedian has been keeping it real since the birth of her son, Gene Attell Fischer, by talking about everything from breastfeeding to returning to work after giving birth. The comedian navigating being a new parent has been a regular topic on her Instagram these days, and the performer seems to be getting a lot of support for it.

Schumer's birthday rest could be needed as the comedian returned to the stand-up stage two weeks after giving birth to her first son. After performing a set at the Comedy Cellar in New York City on May 20, she documented her triumphant return on Instagram. In a photo taken by fellow comedian Jon Laster, she proclaimed, "I'm back!" However, the following day, Schumer was shedding light on some of the negativity she'd received from fellow moms for returning to work after two weeks. "Sending out love to the moms shaming me for doing standup last night! #tinystairs#schumerpumprules pic by @mofischhh," Schumer captioned a photo of her pumping breast milk with a smile.

Once again, some of Schumer's famous pals were quick to comment words of support for the Trainwreck star. Demi Lovato wrote, "You're a rockstar," next to the raised hands emoji. Debra Messing commented, "You are a GODDESS." Shrill star Aidy Bryant brought some humor by commenting, "What's the big deal? Just let me try some of the (milk emoji)."

Anyone who ever doubted Schumer's ability to get honest about new motherhood on social media, was immediately proved wrong on May 11, nearly a week after Gene was born. The Snatched actor posted a photo of herself cradling her newborn with a caption that read, in part, "Ok here's my post baby annoying post and my takeaway from pregnancy. Women are the sh*t. Men are cool and whatever but women are f*cking warriors and capable of anything. . . I did Pilates with strong women and went for walks. I threw up violently and felt sick mostly every day of my pregnancy. Hyperemesis is real and it's awful. But f*ck, what they say is true. The second you give birth it's gone."

If there's anything Schumer deserves on her birthday, it's a chill day in with her new baby. There are sure to be plenty more real moments between the two to come.