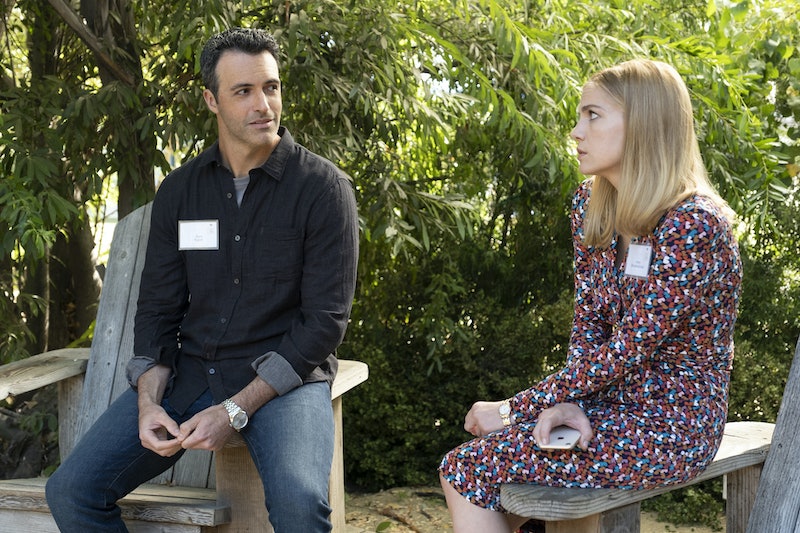 Amy Brookheimer and Dan Egan have always had a tumultuous relationship. Like most of the people making up Selina Meyer's inner circle, they've both got questionable morals, lofty goals, and ruthless methods of achieving them. But recently, they've banded together in a way viewers haven't really seen before. This week, Amy's abortion on Veep shows why she and Dan make a great team — as long as their goals line up.

The unplanned pregnancy came after a night that both Amy and Dan seem to have moved on from — he's certainly sleeping with other people, even if she might not be just yet. In the previous episode, after she deliberated and heard some less-than-graceful comments from Dan about parenthood, Amy decides to terminate the pregnancy, and Dan is all for it. The duo pair up this week to actually head over to the clinic, and throughout all of it, Dan is Amy's rock.

He braves the protesters with her, who are picketing at the clinic when they arrive. ("I'll part the redneck sea for you," he says.) Even after Amy shoots a devastating and profanity-laden speech at the anti-choice crowd, Dan is cool as a cucumber, smiling and charismatically asking them to vote for Selina during the next election. He's almost annoyingly chipper in the procedure room, and even dotes on Amy as she recovers back at her apartment. Given the animosity these two have shared in the past, this episode is honestly enough to raise questions about if they actually might be a match made in sleazy, politically charged heaven.

But of course, it's not that simple. Viewers know that Dan is notoriously selfish, and it's hard to tell how much of his support for Amy's abortion is coming from genuine affection for her, and how much is coming from happiness that he's getting what he wanted in the first place. It's good to see him stick by her side throughout all of it, regardless of his intentions, but it does make his actual feelings for Amy much murkier to decipher.

In an interview with Bustle ahead of Veep's Season 7 premiere, Reid Scott, who plays Dan, shed a little bit of light on what his character's relationship with Amy is like from his perspective.

"I think Dan has a lot of love for Amy, but I think from his part, none of it is romantic. One, it’s just getting his rocks off, And two, I think he really appreciates her. I think he sees that we’re birds of a feather," he said. "I think Dan is certainly more immoral than she is, but I think he’s like ‘if I can just get her to come down to my level, we operate really well together. Because she’s sharky, she’s cagey, she’s smart, and she's vicious. I think Dan sees himself a little bit in her. I think that's where that connection comes. But I don’t think Dan has romantic love for… almost anyone."

Potential romance aside, Amy and Dan's partnership throughout this episode confirms that when they're both working toward a common goal, things can go swimmingly. If they can manage keep this camaraderie up throughout Selina's campaign, there's no telling what they might accomplish.

The question of how likely it is that this peace will last is a whole other story. Dan and Amy are both fiercely competitive, aggressive, and defensive people who aren't exactly known for their compassion or tact. When they're in the same room, it's often a disaster. But hopefully, now that they've been through such an intimate ordeal together, they manage to figure out a way to keep this groove going — their combined tenacity might be what helps sweep Selina to the White House once and for all.