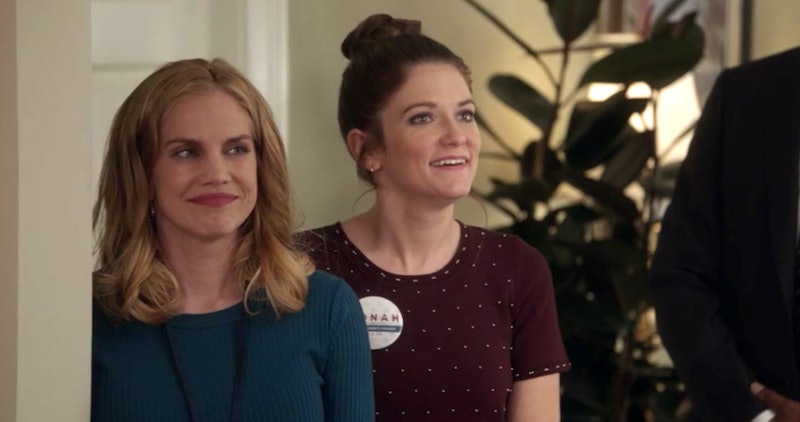 As eagle-eyed viewers may have noticed on this season of Veep, Amy Brookheimer's style is evolving. The new campaign manager for Jonah Ryan (can you believe we've come so far?) has been spotted in heavier makeup, tighter dresses, bigger hair, and higher heels, leading many to speculate that she's emulating a Kellyanne Conway aesthetic as she works for a politician she doesn't really believe in. But according to Veep costume designer Kathleen Felix-Hager, Amy's new look actually goes a lot deeper than that.

"[Showrunner David Mendel] really wanted Amy to embrace the fact that she is out from under Selina's thumb," Felix-Hager tells Bustle. "And has kind of sold her soul to the devil in working for Jonah, because it's not really about the candidate [for her], it's kind of about just being on the winning team. And it's also that Jonah is actually listening to her and paying attention to what she's saying. So Amy, just kind of in embracing this whole world, found an opportunity to sort of... reinvent herself." Who would have thought that Jonah could be empowering for a woman like Amy?

Felix-Hager says that Amy's "embracing this sort of newfound confidence" she's gained while working with Jonah. She explains, "And that manifests itself in form-fitting dresses, and color, and high heels, and hair and makeup."

It's been fun for Felix-Hager and actor Anna Chlumsky to toy with what Amy might choose to wear now that she's on cable news more often, acting as the face of yet another gaffe-filled campaign. The designer says she was able to accentuate aspects of Chlumsky's body that the "Old Amy" would never flaunt, and those kinds of choices speak to the new power that Amy feels now that she has more control in her job and feels more seen by her boss.

Amy is definitely still finding her way — some of her choices might seem odd for the woman fans have come to know and love for seven seasons — but Felix-Hager says the wardrobe tweaks were never meant to be a punchline. Amy is really evolving as a character in this final stretch of episodes, and figuring out a new identity for herself — it's so much deeper than spoofing a Trump administration talking head.

"Veep, even though it's a comedy, and it's sort of this alternate universe, it's also very much grounded in reality, so... we're not making a joke of it," she continues. "We're celebrating the fact that Amy has decided to embrace this other part of her, and she's enjoying it... [Even though] she hasn't quite figured it out."

Felix-Hager said Conway has never been a specific point of reference for Amy's new look; the designer dismissed the idea that the style is based on the Trump advisor. She's much more interested in what the clothes say about Amy's actual character's evolution than in those comparisons.

"[Conway] was never part of the discussion we had. We weren't modeling on any person in particular," she says. "We were really just celebrating — taking a character-driven story arc where [Amy] finds her voice and her power and is sort of embracing that part of herself. But it is not based on anyone in particular."

Amy is definitely at a crossroads, both in her fashion and otherwise. She's working for the most loathsome character Veep has to offer — which is really saying something — but as Felix-Hager says, she'll do anything to simply win. The mayhem Jonah causes might even play into Amy's clothes — she's putting forth a look that tries to say she's got everything working in her favor, even when that's the furthest thing from the truth.

"The internal struggle is real for Amy Brookheimer. But that being said, she's putting on this veneer to sort of present herself a certain way to the world," Felix-Hager says. "So, I think that the choices she's making in her wardrobe are helping her justify her change, if that makes sense."

Veep only has a couple episodes left in its run, and Felix-Hager will be saying goodbye to the characters she's styled for years. Amy's recent transformation, she says, has been a highlight of her tenure, and no one will soon forget it. "To have an evolution is really fun," Felix-Hager says. "And also sad at the same time, because we have to say goodbye in a few episodes."