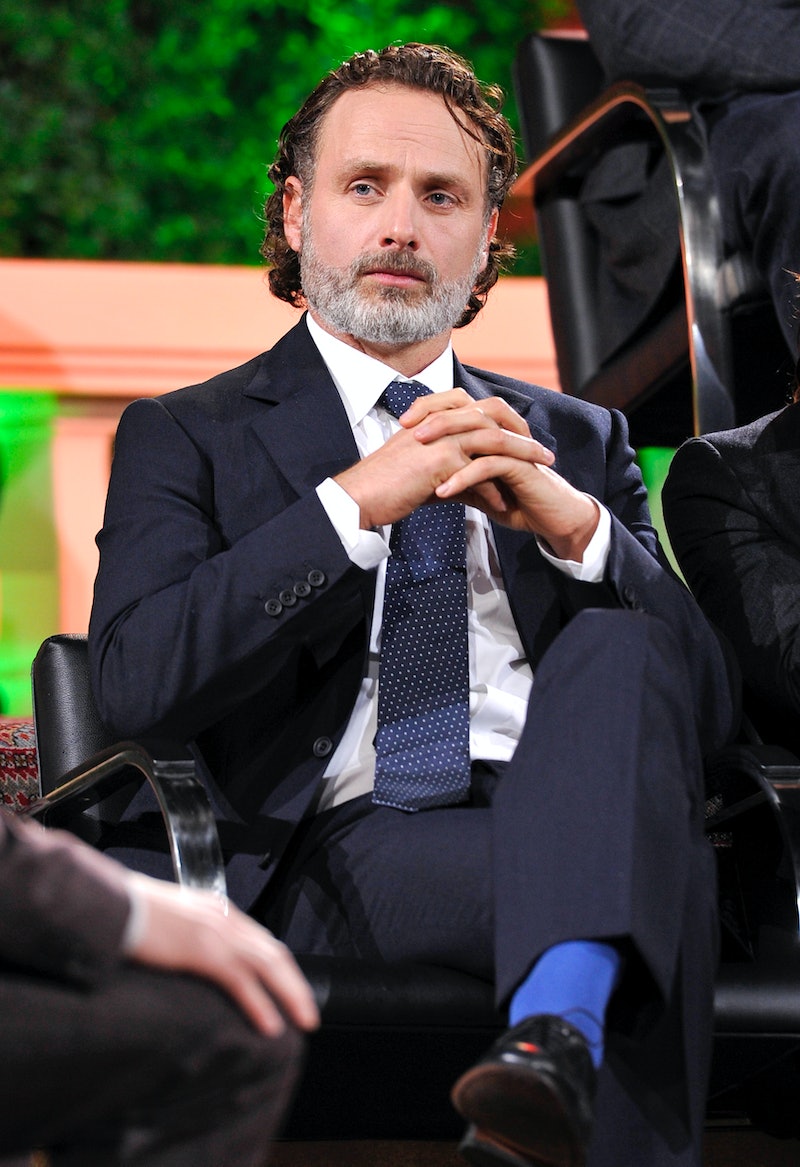 It looks like the end of the road for Rick Grimes may be coming sooner than fans think. On Tuesday, May 29, Us Weekly and Collider reported that Andrew Lincoln will exit The Walking Dead after Season 9. The media outlets indicated that Lincoln is only slated to appear in a total of six episodes in the show's upcoming ninth season and shares that Lincoln is ready to move on to the big screen side of things. (AMC declined to comment on reports of Lincoln's departure. Bustle reached out to Lincoln's reps for comment, but did not yet receive a response.)

Update, 7/19/18: The Hollywood Reporter reported that series executive producer Robert Kirkman confirmed Lincoln's departure in an interview with Kevin Smith. "It's looking that way," Kirkman said, according to THR. "He cares about the show deeply. He wants to do something special on the way out. We have something amazing planned."

Earlier: The close of Season 8 saw Rick have a major change of heart when came to taking down his main adversary, Negan, in its shocking April 2018 conclusion. Despite the seemingly unfinished business lingering between Negan and Rick's group, an unnamed source tells told Us Weekly, “Andrew is leaving because he’s had enough of it and wants to focus his energy on movies." Lincoln's most recent film project debuting in back 2010 – the same year he began appearing on TWD. If the unnamed source's statement is indeed true, leaving the show could offer Lincoln more time to explore some other roles within the entertainment world.

During The Walking Dead‘s panel discussion at PaleyFest in March of 2017, Lincoln discussed the prospect of his character’s, then unforeseen, demise. Per Us Weekly, he explained: “I’m gonna say this now: This is how I want Rick to die.” US Weekly reported that Lincoln narrated through a scenario that he saw fit for Rick's ending. He said, “We’re going through the desert somewhere, and I jump off the bus. So I jump in a very heroic act — Rick jumps off and calls ‘Caaaarl’" Maybe that’s the last thing I say,” he joked. Lincoln continued, “I jump off, and I’m, like, kung-fu kicking. I have to earn my action figure, right? “I’ve gotten bit, ‘Ow!’ Doesn’t matter — ‘Keep going!’”

Offering a conclusion that many fans could get on board for, Lincoln shared: “Then I’m dying, on my own. Just waiting to die. I patch up and a day passes. I’m a survivalist. But I don’t actually die. The final shot is, ‘Holy sh*t! Maybe I’m the cure!’”

He concluded, “Zombies coming, Rick gets up, follows the tracks to go see ‘Caaaarl’ walking — the herd comes towards him, and they separate. He walks through. Boom.” Given the fact that Carl was shockingly killed off in Season 8, fans can certainly put thoughts of Lincoln's fantasy ending to bed. No matter how it pans out, Rick's exit from The Walking Dead is going to definitely be a heart wrenching moment for fans, if the reports are true.

The English actor, who has portrayed the show protagonist, Rick Grimes, for nearly eight years, recently explained to Entertainment Weekly that the evolution that his character will make in the upcoming season. While not giving away exactly how Rick will be written out the series, Lincoln said:

"I think there is always going to be a sense of he’s lost all of the most important parts of himself, and yet he has the legacy and gift that Carl gave him that is going to fuel his ambitions for the future."

Sharing some of the ways his character will change in the upcoming season, the 44-year-old actor continued:

"He’s got a renewed purpose because of this and because of his son. So it’s absolutely a new man. This is the man who couldn’t see what Deanna saw about the future and still couldn’t see it for a long, long time even throughout all of this and the battle he was hell-bent on vengeance.”

He added: “And now you will meet and find a man — depending on how much time after the events that we just witnessed — that has changed, radically, in ideas and purpose.”

Lincoln's exit comes on the heels of reports indicating that Lauren Cohan will also be leaving the series sometime during Season 9. Cohan's return for the show's upcoming season has been a huge topic of conversation for fans after learning that she was in negotiations with show runners to receive a larger paycheck for her role as Maggie. There was also the revelation that Cohan recently signed on as the lead in a new ABC pilot, Whiskey Cavalier which had fans speculating about Maggie's future.

While it's unclear how Lincoln and Cohan exits will be play out amidst the show's narrative, it's easy to speculate that they will most likely be killed off given the show's apocalyptic premise. In her chat with EW Cohan refused to give any specific clues about Maggie's upcoming storyline, sharing: "You know, we're not allowed to tell you anything. But it's good."

With both Rick and Maggie possibly leaving the show, fans can expect to see many shocking events go down when it returns.