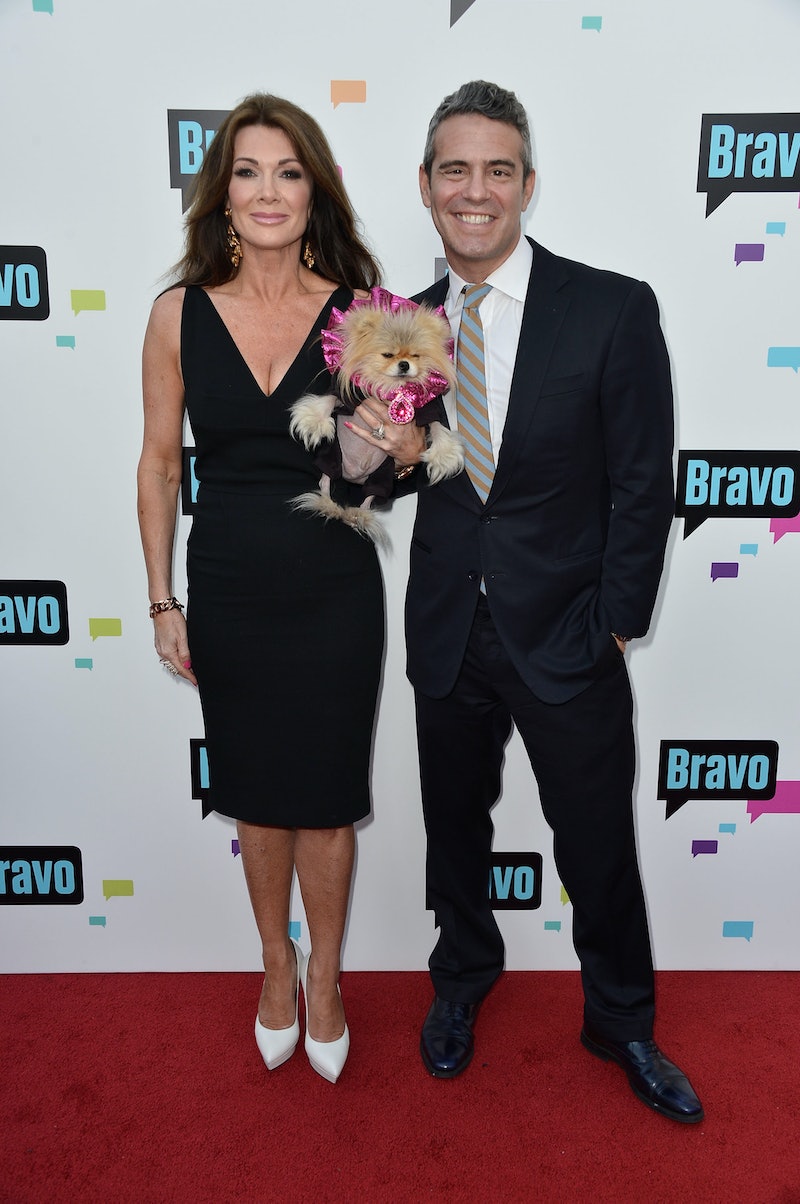 The King of Bravo has spoken. If you've been waiting for Andy Cohen's reaction to Lisa Vanderpump quitting RHOBH and skipping the reunion, the moment has come. (No, that Extra interview where LVP confirmed she was done with The Real Housewives of Beverly Hills was not a dream; she really has moved on from the reality series in a big way. As she told Extra, she "just decided to walk away" from it all after the Puppygate drama spiraled like it did.) On the Monday, June 10 episode of SiriusXM's Radio Andy, Cohen got into how he feels about LVP parting ways with the show, as well as what he thinks about her not participating in the Season 9 reunion.

When Cohen told the RHOBH cast that then-Beverly Hills Housewife Adrienne Maloof had opted out of the Season 3 reunion, LVP had some thoughts on the matter. Per TooFab, she said, "I believe she wanted to stay, and I think she should've come, cleared up the mess and moved on." She also called the move "a mistake" and said Adrienne "changed the boundaries" when she decided she did not want anything and everything from her personal life on the TV show.

"I think if you sign up to do a reality show, you have to be prepared to open up your life," LVP said. "You made your life the viewers' business when you entered into their living room, and that's what I don't understand."

Fast-forward to 2019, and now LVP's the one who's refusing to film the reunion and stepping away from the series. It's a bitt-SUR-sweet moment for fans, and as Cohen put it, "no one will ever replace her."

"No one can replace her. It has been well-documented that when we were developing The Real Housewives of Beverly Hills, I was not totally sold on doing the show. I was like, ‘Wait, we have Orange County, why would we do Beverly Hills?’ When I saw Lisa Vanderpump on that casting tape, man. She was the one who really sold me on doing the show. I just wanted to see more of Lisa, and so did all of you. She is iconic and I am so glad that we will continue to see more of Lisa in all of her glory on Vanderpump Rules. I guess that’s what mitigates the loss of her from Beverly Hills.”

Whether she pulls a Bethenny/NeNe (i.e., comes back to the show after a few seasons) or not, LVP will, as Cohen said, "always be the Queen of Diamonds in the Bravo universe." And hey, at least we'll always have Pump Rules. Er, until that show comes to an end, that is.