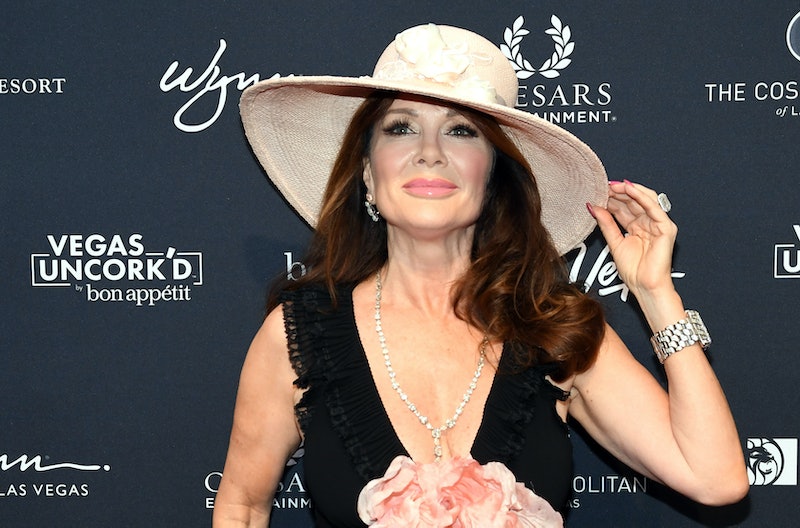 While the world reels from news that OG Beverly Hills housewife Lisa Vanderpump is reportedly leaving the franchise, Bravo is focusing on the remaining four episodes of Season 9. Bravo's statement about Vanderpump's potential departure emphasizes the adventures the other cast members will be having as the season draws to a close including Kyle Richards, Dorit Kemsley, Lisa Rinna, Erika Jayne, Teddi Mellencamp, and new addition Denise Richards.

A rep for Bravo told Bustle via email:

“There is so much great drama and fun still to come this season including the ladies’ trip to France, so before we focus on next season, let’s see where this one takes us."

The Vanderpump Rules star seemingly confirmed that she was leaving in a June 4 interview with DailyMailTV. During the interview, Lisa was asked, "The reunion is coming up are you going?" Initially, she played coy about her possible attendance. LVP said, "The objective of the reunion is to reunite, right?" Then, she revealed, "And I have no inclination to reunite with the women who've been harassing me for 10 months now." Finally, she said, "So in all probability, no."

So, the reality star was then asked the big question: "Does this factor into what you're going to do next season? Are you coming back to the Housewives?" Lisa began, "I think they've made it pretty impossible for me to go back frankly." Then she confessed, "So ... no."

Vanderpump's rumored exit comes on the heels of a rocky season for one of the very first Beverly Hills housewives. For much of the season, the businesswoman was entangled in "Puppygate" drama, which began after co-star Kemsley adopted a dog from her rescue center Vanderpump Dogs. After the dog was re-homed due to "Lucy Lucy Applejuice" allegedly biting one of Kemsley's children, controversy amongst the group ensued. The dog ended up in a shelter, as opposed to back at Vanderpump's center. The conflict reached a fever pitch when a story about the Dorit dog drama was published.

Lisa's costars accused her of leaking the news. LVP was especially offended when close friend Richards credited her with the leak, resulting in Ken and Lisa asking their former friend to leave Villa Rosa following a heated visit. Though the Vanderpump Dogs co-owner repeatedly denied the accusations, going to great lengths including swearing on her children's lives and taking a lie detector test on camera to proclaim her honesty.

However, around the time that the administer of the test said Vanderpump was telling the truth, the restauranteur stopped filming with her co-stars. She skipped out on Camille Grammer's Hawaii-set wedding and even told Page Six that she had been "bullied" out of filming anything further with her cast mates. On Twitter May 29, LVP clarified that while she had filmed solo scenes, the producers had cut out the rest of her scenes for Season 9.

Perhaps producers were looking to give fans conflict before closure on the season's reunion. Rumors have swirled about whether or not Lisa will show up to the reunion. LVP, who recently opened up the Vanderpump Cocktail Garden at Caesar's Palace in Las Vegas, has clearly indicated that her presence is less than likely at the reunion or future seasons of Housewives, for that matter.

While fans wait for official confirmation on this iconic bravolebrity's future, some may be pouring a glass of Vanderpump Rose out for LVP as Housewives star.