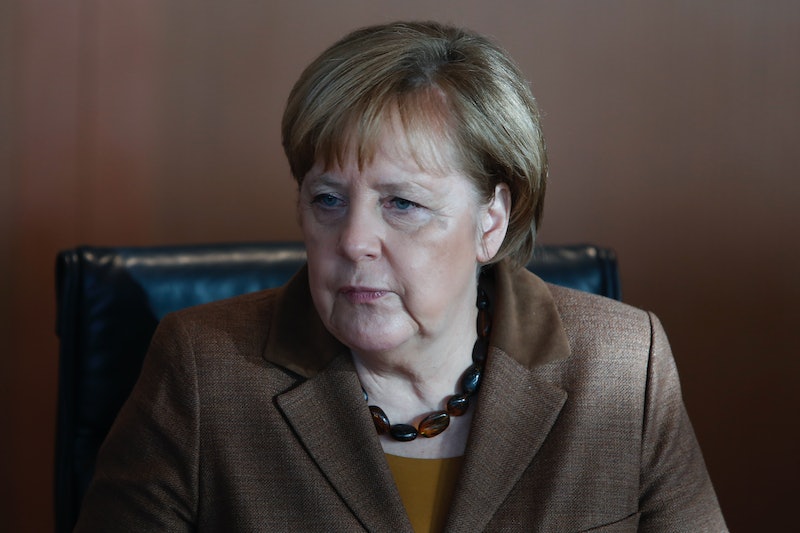 In a rare and exceptionally candid profile published on Jan. 28, German Chancellor Angela Merkel was interviewed about feminism — and some of her answers were kind of surprising. To Zeit Online, Merkel explained why she hasn't always associated with being a feminist, and why she believes in gender parity as a "logical" solution for future generations. She also confirmed the definition of feminism that she was willing to endorse.

As interviewer Jana Hensel pointed out, Merkel was not willing to call herself a feminist 10 years ago. Questions of her relationship to the feminist movement have been asked as recently as 2017. But Merkel set the record straight — at least, a little bit. She said to Hensel,

I consider women like Alice Schwarzer to be feminists. Or Marie Juchacz, who together with others fought for women's suffrage 100 years ago and won. I don't want to seek out false praise. They fought all their lives for women's rights in ways that I cannot claim to have done myself.

Merkel continued, "As a woman, I of course also had to find my way like any other, so that one day we would really find our way to gender parity...Parity in all areas just seems logical to me. That's not something I have to constantly bring up."

At one point in the interview, Merkel clarified the explicit brand of feminism that she is willing to endorse. Merkel said, "At the G-20 Women's Summit, Queen Máxima of the Netherlands found a definition of feminism that I can endorse: For her, it's feminism if I am in favor of men and women having the same life opportunities."

But Merkel pushed back on the notion that being a woman is "a kind of blemish," as was suggested by Hensel. Merkel argued, "It is in no way a blemish. But of course, we experience disadvantages. On the one hand, it is rightly expected today that women are represented in all areas ... On the other hand, there are, of course, areas in which women have a harder time because they first have to shape new paradigms."

Merkel also disagreed with the notion that she was the "most important female role model of the present day," as one of the most known woman politicians in the world.

Merkel said, "Well, that is a bit exaggerated. Other women in politics have also made a significant contribution: Hillary Clinton, Theresa May. Margaret Thatcher was way before our time."

Despite the fact that Merkel is unwilling to give herself much credit in the way of being a trailblazer for future generations of women, she did take a moment to acknowledge the double standard that exists in politics.

"For a man, it's no problem at all to wear a dark blue suit a hundred days in a row," Merkel lamented, "but if I wear the same blazer four times within two weeks, the letters start pouring in."

As The New York Times notes, Merkel's interview with Zeit Online marks the first time in her 13-plus years as chancellor of Germany that she has spoken about the notion of feminism in-depth. Merkel has publicly stated that she will not run again for chancellor when her term expires in 2021. Only time will tell if she will continue to engage in public discourse around the notion of gender parity as her political career — at least as chancellor — comes to an end.