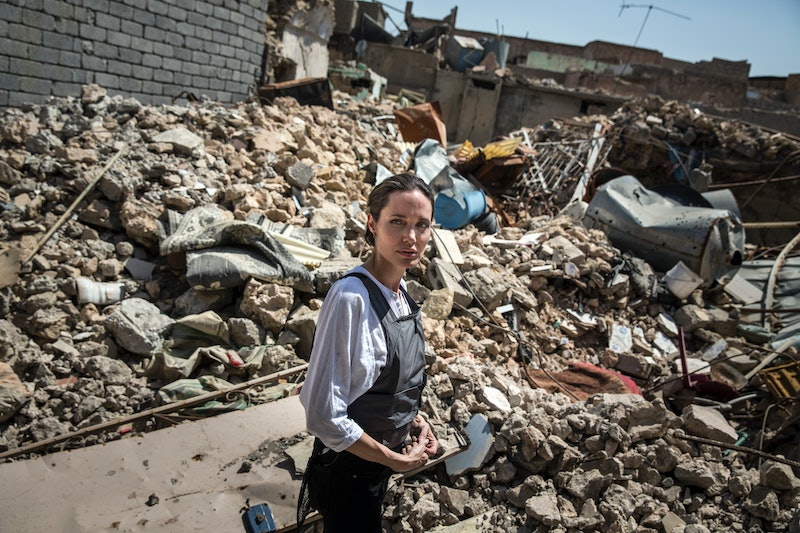 It's been roughly six weeks since the Trump administration first adopted its "zero tolerance" immigration policy, and already, more than 2,300 children have been separated from their families at the U.S.-Mexico border, according to the Department of Homeland Security. So, when Angelina Jolie advocated for displaced families across the globe — by way of an impassioned new op-ed piece for The Economist on June 19— it seemed her rousing words couldn't have come at a more pertinent time.

That being said, the essay's timeliness was twofold. Because in addition to the heartache erupting at the southern U.S. border, Wednesday, June 20 also marks World Refugee Day. According to the United Nations' official website, the annual day of commemoration aims to recognize "the strength, courage and perseverance of millions of refugees" worldwide, many of whom are scrambling to find reprieve in the face of constant violence. "This year, World Refugee Day also marks a key moment for the public to show support for families forced to flee," reads the UN website's write-up.

After reading Jolie's powerful op-ed for The Economist, it certainly sounds like the actor is doing her part to follow suit. In a lot of ways, it seems like she's been doing that, anyway, mostly via her role as a Special Envoy to the United Nations High Commissioner for Refugees, which has taken her to conflict-ridden areas (most recently, West Mosul, Iraq) to help communities rebuild.

Penning her essay, aptly titled, "How to alleviate the refugee crisis," Jolie echoed the UN's call to action with a sort of rallying cry of her own. The op-ed's bottom line basically boils down to this: Alienating the world's displaced population, in pretty much any capacity, really only serves to aggravate an already grave international issue. Instead, she suggested an alternative:

"We must try to rally people and nations to act together based on common interests and universal aspirations for security, dignity and equality: understanding that this does not come at the expense of our safety and economic well-being at home, but is an essential requirement when facing problems of international dimensions."

To ensure readers can wrap their heads around the massive scope of this particular issue, Jolie offered some perspective right from the get-go. Opening the essay, she rattled off a laundry list of statistics that'll make your head spin. (Not because they're tough to comprehend; but, considering their significance, they are nonetheless jarring.) As Jolie noted in the essay, the world's refugee population currently stands at about 68 million people, and has been on the rise since 2012. That figure was corroborated in a recent report by the UN Refugee Agency, published Tuesday, June 19. But, as Jolie continued on to say in the op-ed, initiatives that aim to support refugee populations are vastly underfunded.

So, Jolie went on to say, it's not surprising that the displacement crisis is generating some concern, "not because people are heartless, but because this is not a sustainable situation." Here, she seemed to make a pretty obvious reference the Trump Administration's recent crackdown on immigration, as well as the sweeping public outcry that's cropped up in its wake. Beyond its impact at the southern border, the policy shift threatens to make it increasingly difficult for people to seek refugee or asylum status in the U.S., if not completely impossible.

"The answer is not countries adopting harsh unilateral measures that target refugees, and run counter to our values and our responsibilities," Jolie wrote. Instead, she argued, "we must find ways to lower the number of displaced people worldwide, by preventing and solving the conflicts that drive them from their homes."

It should probably go without saying that "alleviating the refugee crisis," as Jolie's op-ed put it, will be no small feat. But concluding the essay, Jolie made a pretty compelling argument about why we, as a global society, should do it anyway. "We should not leave the debate to those who would exploit public anxiety for political advantage," she wrote. "We are being tested today and our response will be the measure of our humanity." So, who else is ready to rally?

More like this
Brad Pitt’s Recent Dating History Includes A German Model
By Brad Witter
What Is Brad Pitt’s Net Worth? The Bullet Train Star Now Makes 8 Figures Per Film
By Hugh McIntyre
13 Photos Of Princess Charlotte Loving The Commonwealth Games
By Sam Rogers
Meghan Markle Gave An Adorable Lilibet Update
By Alice Broster and Sam Ramsden
Get Even More From Bustle — Sign Up For The Newsletter