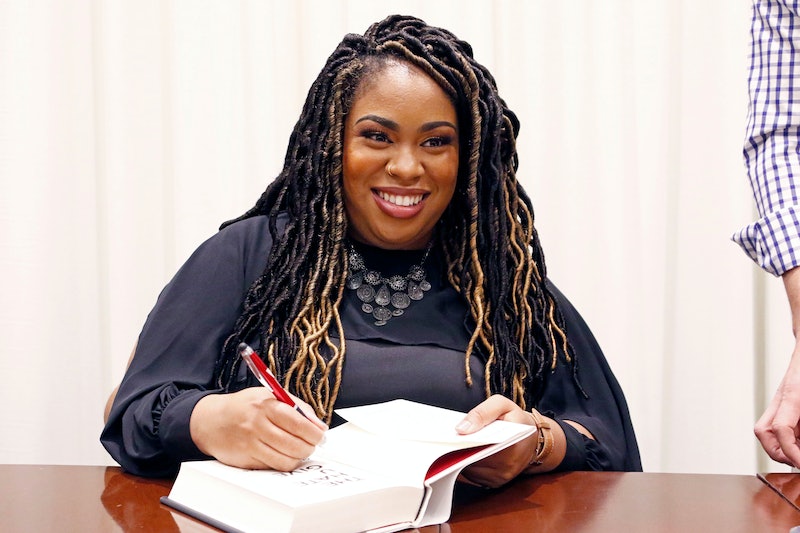 Could reading be classed as activism? Angie Thomas certainly thinks so. In 2017, Thomas, who is based in Jackson, Mississippi, shot to fame when her young adult novel The Hate U Give (THUG) gained a spot on the New York Times Bestseller list and was later adapted into a film starring Amandla Stenberg. Riding the wave of this success, Thomas is back with another book, On The Come Up (OTCU), which is set, like THUG, in the fictional neighbourhood of Garden Heights — but this isn’t a follow up to Thomas' first book. I spoke to the author about activism, influences, and the importance of diversity in children’s novels.

Although the protagonists of both THUG and OTCU live in the same neighbourhood, that's where their similarities end. OTCU tells the story of Bri Jackson as she tries to lift her family out of poverty through the most hopeful way she knows how: hip hop. After her father dies, Bri lives with her brother and her mum, who Bri fears may turn back to drugs after a long period of abstinence. The story chats Bri’s rise to stardom, illustrating benefits that fame can bring but also the downsides and dangers that come with it.

Alice Broster: When did you know you wanted to write?

Angie Thomas: Well I have been telling stories most of my life. I remember when I was little my mum would read me bed-time stories and if I didn’t like the way that they ended I would tell my own version. For instance, I hated the way Green Eggs and Ham ended so I told my own version.

By the time I was a teenager I looked to hip hop as a way of storytelling and it wasn’t until I got to college that I decided to make the shift to writing novels. Storytelling has always been a big part of who I am and what I do.

AB: The Hate U Give was an instant success. How was it dealing with the huge amount of attention that came with it?

AT: It’s been surreal and in some ways I have disconnected from it in the sense that, when people talk about this huge successful book, it takes me a second to register that they are talking about something I did. I like to keep it that way. I think of the book as its own thing and I am so glad that it’s successful but it is still hard for me at times to realise, 'Wow that’s my book. I did that.'

AB: How was it sitting down to write OTCU off the back of that?

AT: At first it was a little hard. I put a lot of pressure on myself and I was worried what other people would think. I was worried whether or not it would find its readership. I am glad I went through the struggle because it helped me listen to my voice as an author and go with my gut as a writer, and write the story that I wanted to tell and I enjoyed.

AB: What inspired you when it came to writing OTCU?

I was also really inspired by the censorship attempts that were placed on THUG. There were school districts that tried to ban the book and remove the book from shelves. Knowing that so many of my heroes, especially my hip hop heroes, had faced censorship attempts as well made it feel fitting to write about that, and to write about what it means to be a young, black person, especially in America, when freedom of speech is not necessarily free for you. People judge the way you say things instead of paying attention to what you are actually saying.

AB: Bri and Starr are both incredibly strong female protagonists, was that an important aspect of each book for you?

It's important for me to create mirrors through my characters so young black kids can pick up one of my books and not only see themselves authentically but also see themselves celebrated.

AB: Both THUG and OTCU are set in Garden Heights — did you know you wanted to write more than one book set there?

I also wanted to know what Garden Heights looks like now and what it is like for a young person there after Khalil. We talked about Ferguson when Ferguson was happening. We talked about Cleveland or Baltimore or all of these different cities where unrest has taken place and we talk about them as they were happening but we don’t talk about them now. What’s it like to navigate those spaces now? It was important for me to look at that as well.

AB: Do you think you will ever set another book there as well?

AT: Yes, my third book will be set there. It will probably be the last one set there.

AB: How do your own experiences, past and present, fit into your stories?

AT: When I sit down and write, sometimes I take my own experiences to see how I can use that in my story but a lot of times I feel like my stories are a response to things. I think OTCU was a response to the people who loved and criticized THUG. I had some people come up to me and say, “Oh I loved Starr, I loved how composed she was. I love how well spoken she was” — which is offensive, I have to point out. But they said they loved that she had such a stable functional family and I wanted to take all of the things that they loved and go in the opposite direction so that’s what I did with OTCU.

AB: Where do you think literature fits in with activism, if at all?

AT: I think it plays a huge roll in activism. I think writing is a form of activism. If nothing else, we as writers, especially children’s authors, create young activists. We either do that by showing them themselves and empowering them or showing them their own and educating them. I think books are powerful. They can help us develop empathy.

Books can give us glimpses into lives that are unlike our own. Books can make us aware of issues that we were unaware of that are going on around us. I think one of the greatest tools we have as a society to fight things like bigotry and poverty and other issues we have are books.

AB: How important do you think it is for young people to see themselves in books?

AT: Very. And I think it is important for other kids to see them in books. I’m a firm believer that if some of our current leaders, especially in America, had read books about kids who were not like them when they were kids maybe we wouldn’t have to say Black Lives Matter.

AB: If you could go back, what advice would you give your younger self?

AT: I would tell my younger self to keep going, keep dreaming. At times dreaming can feel silly and stupid, especially compared to reality, but hold onto your dreams, keep going, it’s going to be worth it. Listen to your gut, go with your gut instinct, and create the things that you would enjoy.

On The Come Up is out now, published by Walker Books, priced £7.99 in paperback original.