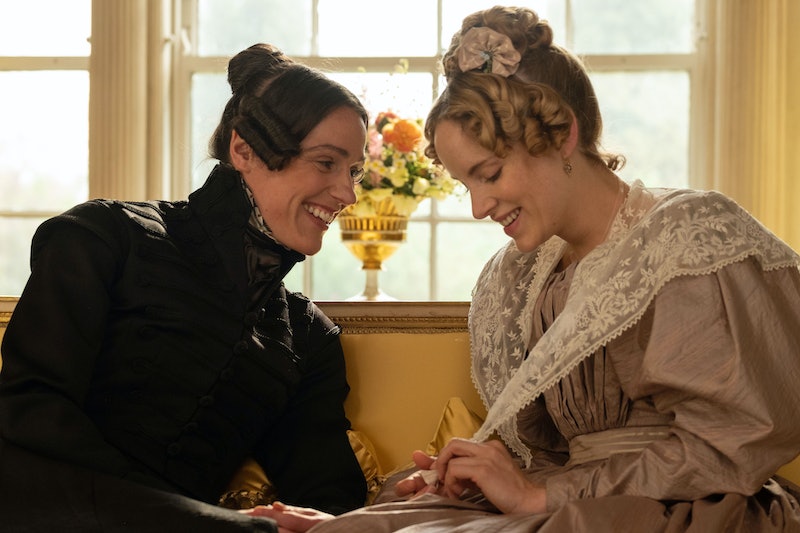 HBO's Gentleman Jack follows the true story of queer scholar and businesswoman Anne Lister, but the show features another important figure at her side. Ann Walker, who was also a real person, was hugely important to LGBTQ history. Gentleman Jack puts a heavy emphasis on her relationship with Lister, which is remembered to this day as a milestone for the gay community.

According to a website run by historian Helena Whitbread, who has decoded and edited many of Lister's historic diaries, Ann Walker was a resident of Shibden Hall, a property Lister owned and managed. The site states that Walker "was a shy, wealthy young woman from Lightcliffe, who came to live at Shibden in 1834." Though not much is known about Walker's life before she met Lister, the Guardian reports that she was an heiress to an estate in Yorkshire, and that she and Lister "lived openly as a couple" after she moved to Shibden Hall.

Lister and Walker are largely credited as having the first lesbian marriage in Britain, Whitbread's site continues, though their union would not have been officially recognized at the time. The women exchanged vows at the Holy Trinity Church at York in 1834, and a plaque now exists there to commemorate their marriage.

Walker and Lister's relationship is rightfully viewed as groundbreaking, but as in any marriage, it reportedly had its share of low points over the years. According to the Independent, Walker struggled with depression, which may have been exacerbated by the secrecy surrounding her and Lister's relationship. The outlet states that Lister "was frequently impatient with [Walker's] low spirits," and that the couple also fought about money. But though their marriage was "not a happy one," Whitbread's site says, they nonetheless stayed together until Lister's death in 1840.

Before meeting Walker, Lister was in a relationship with a woman named Marianna Lawton, who later accepted a marriage proposal from a man. Gentleman Jack picks up in the aftermath of this fallout, as Lister is recovering from heartbreak — something that, as Caroline Framke notes in Variety, feels purposeful. "In eschewing a perhaps more passionate affair for one rooted in a desire to settle down, [Gentleman Jack writer Sally] Wainwright makes an intriguing choice that sets up a decidedly adult romance about devotion, trust, and partnership that is rare for TV in general, let alone for lesbian characters in a period piece," Framke writes.

Traditionally, Walker has been seen through the lens of Lister's story. There is a practical reason for it, considering much of what we know about her comes from Lister's perspective, as written in her diaries. But hopefully, Gentleman Jack — and actress Sophie Rundle, who plays Walker in the series — can bring more depth to the woman she was outside of her and Lister's relationship. The show may be about Anne Lister's legacy, but Ann Walker was no small part of it.