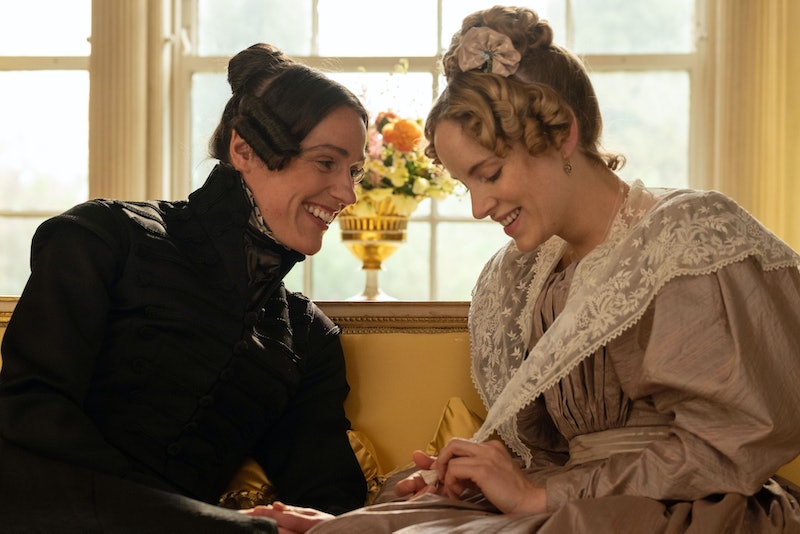 2019 is the year for woman-on-woman period romances, and spinning a mostly male recounted history on its head. You got to see Queen Anne getting down and dirty in The Favourite, as well as the sexual shenanigans of the French writer Colette in two films already released this year. Now it's time for you to learn about history's most explicitly-out lesbian that you've never heard of. Her name's Anne Lister, and she's the subject of a new BBC drama. But when does Gentleman Jack start on BBC1?

The show's set to premiere on both BBC and HBO, according to HBO's official site, and although an air date has yet to be officially released, the Radio Times reckons it'll be sometime in early 2019. That means it's probably waiting just around the corner, so I've asked one of the show's reps to confirm, and I'll let you know if and when they get back to me.

I first discovered Anne Lister as a young lesbian, hungry to read about women like me who existed throughout history — despite them often coming up scarce. If you haven't already, I can't wait for you to learn about her too.

It's actually not the first time the BBC have commissioned a drama about Lister's fascinating and troubling story. The wonderful Maxine Peake portrayed her in BBC2's The Secret Diaries of Anne Lister, a dramatic adaptation of Lister's cryptic diaries (she wrote them in her own self-made language and code) which aired in 2012. While Peake's series took a more intimate look at one of Lister's great loves, Gentleman Jack offers a broader take on Lister's life.

Most notably, Lister was a ruthless property owner, and a huge threat to male proprietors in the regency era. Gentleman Jack specifically focuses on her determination to transform the fate of her ancestral home, the fabulous Shibden Hall, which still stands in Halifax. Playing her this time around will be Suranne Jones, who's perhaps most recognisable as Dr. Gemma Foster from Doctor Foster.

Unlike Peake, she does sort of look the part, and I really couldn't think of anyone better. Olivia Colman, maybe? Plus, I really trust that the script will be amazing. It's penned by the exceptionally talented Sally Wainwright, the mastermind behind the devastating Happy Valley, who's also happened to work with Jones before, when the actress appeared on Wainwright's female detective show Scott & Bailey.

"I first worked with Sally 10 years ago and I remember the feeling of reading her scripts like it was yesterday. They were scripts for women; fresh, daring and bizarre in a wonderful, modern, fun, complex and challenging way," Jones told the BBC on Jul. 20, 2017, adding: "Now I once again get to speak the words of an almighty talent on a show I know she holds close to her heart."

Gentleman Jack has all the credentials to make it one of 2019's best shows, and I'm really hoping it lives up to that promise. In my opinion, there's hardly anyone in history more fascinating than Anne Lister.