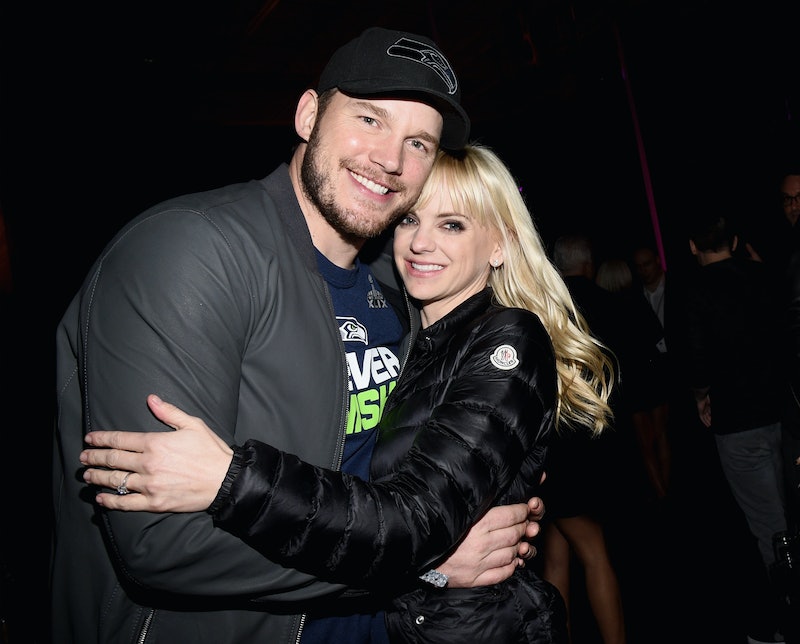 Having one famous parent would be pretty cool. Having two famous parents, though? The coolest. Especially when one of them is a superhero. That's like, a little kid's dream, right? Well, not necessarily. According to a new interview with People, Anna Faris and Chris Pratt's son knows they're both famous, and as it turns out, he could not care less.

Pratt and Faris — who split in 2017, but are straight-up killing the co-parenting game — share a 6-year-old son named Jack. He's definitely not old enough to appreciate and/or have seen all of his parents' films (especially some of the more *grown-up* ones), but you'd think he'd at least be stoked that his dad is a part of the Avengers.

Nope, Jack remains unfazed. "I think that for Jack, I think he’s had such an awareness of both his parents being in Hollywood and sort of that he’s not impressed, which is annoying," Faris joked to People.

So, what does excite Jack then, you wonder? Traps. Specifically, capturing his mom in traps. "He loves making traps," Faris revealed. "He’ll put ropes up so I trip over them, which annoyingly I seem to fall for all the time. We play imaginary games a lot and I play Aunt Vanya, who is not the nicest and he loves to try to trap Aunt Vanya."

Pratt has also opened up about Jack's disinterest in his and Faris' stardom in the past. During an appearance on The Graham Norton Show back in May 2018, Norton addressed Pratt and said, "Now, Chris, your son seems remarkably unimpressed by your career." Pratt shrugged and replied, "Yeah, yeah. He really couldn't care less."

After Norton suggested that perhaps his son doesn't believe he's "the real deal," the actor went on to explain, "He went to Universal the other day — Universal Studios in L.A. — theme park, had a good time. He came back and he said, 'Hey Dad, guess what? Today, I saw the real Owen."

Now, in case you're not familiar, Owen Grady is the dinosaur researcher Pratt plays in the Jurassic World franchise. "There's this guy at Universal who dresses up like my character from the movie," Pratt told Norton, "and the dinosaurs come out and he like, does this thing ... and [Jack's] like, 'No, I saw the real one, Dad.'"

That's actually pretty hilarious. Jack is apparently aware enough to know that his dad plays Owen in the Jurassic World movie, but thinks the Universal Studios Owen character is way more legit. "He's putting the work in, he's there every day," Norton pointed out after Pratt told his story. Hey, he's not wrong.

Maybe one day Jack will grow up to appreciate the fact that his parents are wildly famous. Or, maybe he won't. Maybe he'll grow up to despise Hollywood and the film industry entirely — and then like, separate himself from pop culture forever by running away to live alone in the woods. OK, that's probably a bit of a stretch.

Regardless, it's definitely not a bad thing for him to have a sense of normalcy. Even if his celebrity parents wish that he was at least a *little* bit impressed.