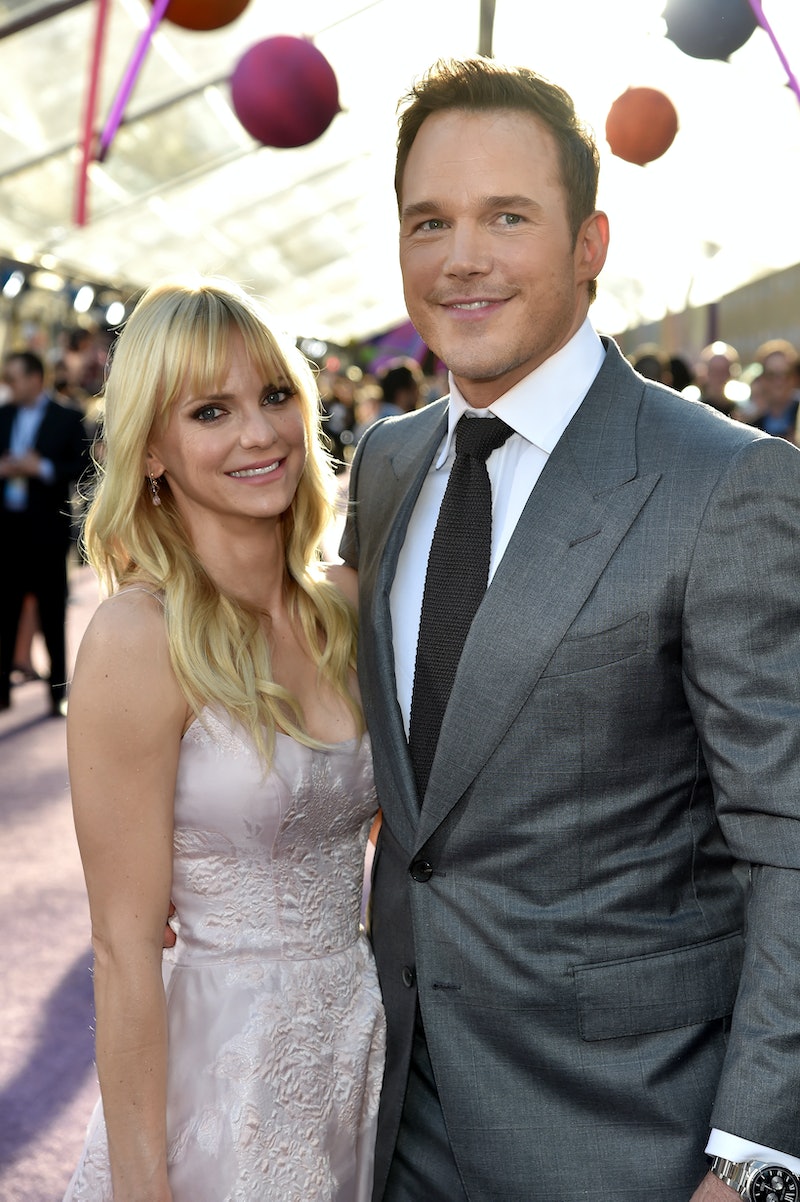 Divorce is never easy, but Mom star Anna Faris and her ex Chris Pratt's co-parenting tips prove that not every split has to be a messy one. In the latest episode of her Unqualified podcast, Faris got real with a caller who explained they were having a hard time co-parenting with their ex. While the actor and author was straightforward about how hard divorce is, her advice to the caller emphasized how, in her experience, putting her son Jack's well-being first has been the key to keeping things amicable in her post-marriage partnership with Pratt.

As reported by Entertainment Tonight, Faris said, "Chris and I work really hard [to co-parent] because we have Jack. That is sort of the long game idea and making sure Jack is really happy, which makes us really happy. We have sort of the luxury of circumstance. You know, we are both in other loving relationships, but it's like, how do you not, in general, sink into a place of bitterness?"

Faris and Pratt announced their separation on Aug. 6, 2017 with a joint statement that read:

Their divorce was finalized on Nov. 7, 2018, and at the time, a report from People revealed just how committed these two are to making sure their 6-year-old son, Jack, feels happy, safe, and loved. According to court documents reportedly obtained by People, neither of them asked for spousal support or child support payments. But they reportedly agreed on joint custody, and they decided not to live more than five miles apart until Jack is in the sixth grade.

Since then, Faris and Pratt have shown just how committed they are to remaining friends as they parent their son. As the podcast host noted, she and Pratt are both in relationships with other people now. She's dating cinematographer Michael Barrett, while Pratt is with Katherine Schwarzenegger. In Oct. 2018, TMZ reported that the couples took Jack trick-or-treating together as a family. And while not every divorced couple will have a situation where they're comfortable enough with one another to spend that level of time together, it's an arrangement that seems to be working for Faris, Pratt, and their respective partners.

Faris realizes her situation is unique though, and she made sure to share with her listeners that every breakup — including hers — is painful. "I do want to reiterate though, that I f*cking acknowledge, we all do, everyone acknowledges, that there's bitterness and pain with all breakups and that hopefully makes us more human," she said during the podcast. "But the long game, and it's just the worst being the bigger person. It just is. It f*cking sucks! Until then, what [matters most] is that everyone's happy."

As sad as fans were to see Faris and Pratt split, these exes definitely seem happy with the new direction their lives are moving in. And there's no doubt that they've mastered the whole co-parenting thing with the level of gracefulness that we've come to expect from the gifted stars.

More like this
Hailey Bieber Just Responded To *That* Viral Met Gala Moment
By Radhika Menon and Sam Ramsden
Tristan Thompson Proposed To Khloé Kardashian & She Said No
By Jake Viswanath
Dixie D’Amelio & Noah Beck “Love Each Other” Despite Breakup Rumors
By Julia Emmanuele, Jordyn Tilchen and Grace Wehniainen
Kanye West Apologizes To Kim K "For Any Stress I Have Caused" In Rare Interview
By Jake Viswanath
Get Even More From Bustle — Sign Up For The Newsletter