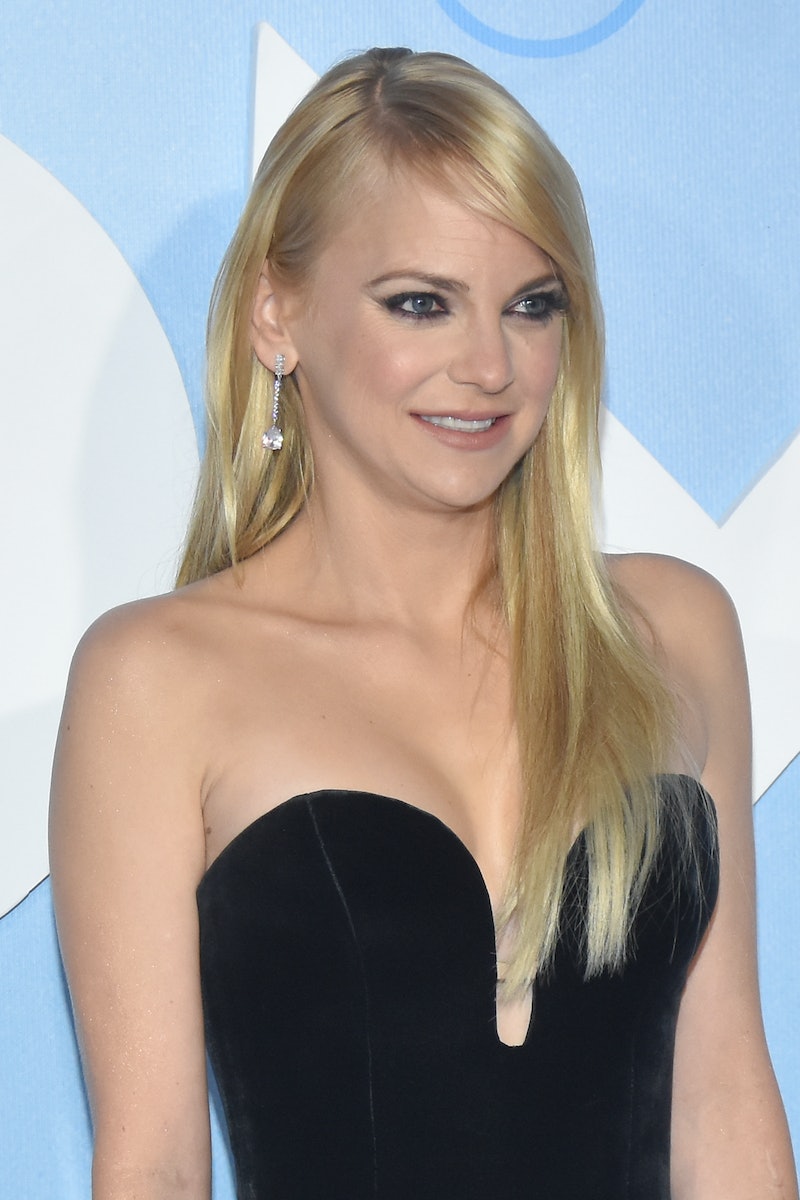 While out and about this weekend, Anna Faris sparked engagement rumors after she was photographed with a massive diamond ring on, you know, that finger. In photos captured by TMZ, Faris was spotted in Los Angeles on Sunday, Nov. 3 donned in a black baseball cap, gray t-shirt, blue jeans, and a black jacket wrapped around her waist. The casual look was completed with sunglasses and the giant diamond ring, which appears to suggest that Faris is engaged to her boyfriend of two years, cinematographer Michael Barrett. (Bustle reached out to Faris' reps for comment on the engagement rumors, but did not hear back at the time of publication.)

Faris and Barrett have been linked since September 2017, as per TMZ. The two, who reportedly met on the set of Faris’ 2018 comedy film Overboard, were first spotted in Malibu together taking in the sights that month. Faris was previously married to Chris Pratt for eight years prior to their August 2017 split. Their divorce, one that was settled as “amicably” as possible, was finalized in November 2018, as per PEOPLE. Faris and Pratt share one son, 7-year-old Jack, together.

“We tried hard for a long time, and we’re really disappointed," Pratt wrote in a statement issued on Facebook at the time of their separation. "Our son has two parents who love him very much… We still have love for each other, will always cherish our time together and continue to have the deepest respect for one another."

About a year after the divorce was finalized, Pratt wed girlfriend Katherine Schwarzenegger this June. It appears as though Faris and her longtime beau are on good terms with Pratt and Schwarzenegger post-divorce, too. On Halloween in 2018, the friendly exes and their significant others were spotted trick-or-treating with their son Jack. In photos shared by TMZ at the time, Faris, Barrett, Pratt, and Schwarzenegger were all smiles on the spooky holiday.

Faris’ possible engagement comes after she revealed she “struggles” with the institution of marriage since she’s experienced it twice. (Faris was married to actor Ben Indra between 2004 and 2008 prior to her marriage to Pratt.) In an interview on the podcast Divorce Sucks with Laura Wasser in April, Faris said of marriage, “I believe in love and monogamy and I believe in the commitment with a relationship, but I do struggle — having gone through it a couples times now — with our legal system getting involved kind of on a feminist level."

Faris added, "I am not crazy about weddings unless I can be the super obnoxious person."

More like this
The History Of Taylor Swift's "All Too Well" & What The Lyrics Actually Mean
By Jake Viswanath
Vanessa Hudgens Is Reportedly Engaged To Cole Tucker
By Jake Viswanath
RHOP’s Robyn Dixon Explained Why Juan Paid For Another Woman's Hotel Room
By Brad Witter
Pamela Anderson’s Dating & Marriage History Could Be Its Own TV Series
By Jake Viswanath
Get Even More From Bustle — Sign Up For The Newsletter
From hair trends to relationship advice, our daily newsletter has everything you need to sound like a person who’s on TikTok, even if you aren’t.