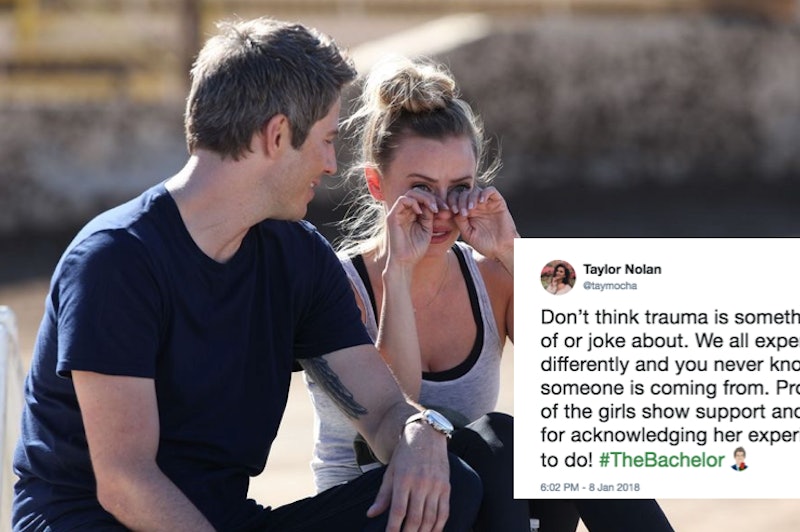 Even though The Bachelor (senior producer: Lindsay Liles) group dates tend to be pretty cliché, on Monday night's episode, the show mixed things up by handing Arie and his contestants a full blown demolition derby. Unfortunately, getting in a car to crash into other cars was a little too much for Annaliese, after a traumatic experience with bumper cars from her childhood left her scared. Twitter immediately jumped on "bumper car trauma" to poke fun at Annaliese, but as Bachelor alum (and mental health counselor) Taylor Nolan pointed out, it's not OK to laugh at someone's trauma — no matter how small it may seem to you, it's not small to the person suffering.

When Annaliese first told her story, it was a little confusing. First, she broke down in tears at the thought of getting in the demolished car, and then, the truth came out: When she was a kid, she got trapped in the center of the bumper cars, with kids coming from all around her to hit her car. It seems to be something she's never gotten over, considering how scared she was, years later, to participate in the derby.

At first, a trauma tied to bumper cars may sound silly, but for Annaliese, it isn't — just like Taylor pointed out in this tweet:

Sadly, fans didn't seem to pay Taylor any mind on Monday. So many jokes and memes have already surfaced about Annaliese's story — and the very dramatic reenactment that played while she was talking about it. But let's all stop for a moment, because what Taylor's saying is very important. It's hard to know how deeply a trauma has affected someone from the outside looking in, and that includes what she's gone through. To the rest of us, trying to cope with something that happened on the bumper cars as a kid may seem like no big deal, but to Annaliese, it was obviously a huge deal. Trauma is different for everyone, so nobody should judge what someone else has experienced.

Fortunately, on a show that's often very competitive, it was good to see how sweet everyone was to Annaliese while she was stressing out about the derby, and Arie couldn't have been more supportive of her after she told him why she was feeling nervous about getting in the car. He first told her she didn't have to do it, but when she wanted to, he promised to look out for her out there. Being that he's a professional driver, he's the guy you want making sure you're OK on a date like that.

And as far as driving in the derby itself goes? Annaliese was totally able to face her fears and participate — and not only did she participate, but she also did well. She was hitting people left and right like a pro, and didn't seem too bothered when she got hit. In fact, she seemed like she was feeling really victorious by the end of the derby, and walked away with a smile on her face (although she did admit that this particular day of driving did nothing to help her get over the whole bumper car thing). A lot of people would never face their fears like that, so she gets major credit for doing it.

Good for Annaliese for being so open (on national television, yet) about something that has clearly been really hard for her to cope with — bumper cars or no bumper cars. Like Taylor said, acknowledging your trauma isn't an easy thing to do, so it says a lot about her that she did. Now, let's all cut her some slack.