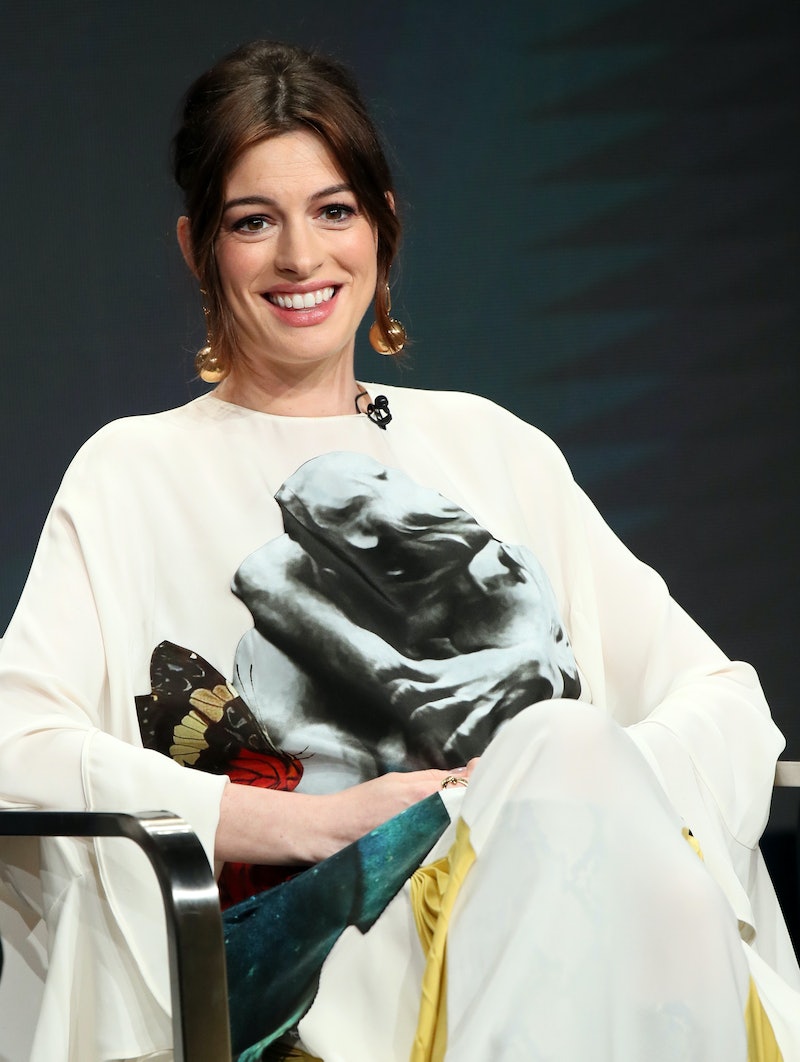 In case you missed it, Anne Hathaway recently announced via Instagram that she's expecting her second child with her husband, Adam Shulman. In her announcement post, the actor also made sure to note that it was "not a straight line" with her pregnancy. And now, in a video clip that HuffPost shared on Twitter on Monday, July 29, Hathaway revealed why opening up about her fertility struggles was so important to her.

In Hathaway's original July 24 post, she showed off her growing baby bump in a photo that she captioned, "It’s not for a movie...⁣⁣#2⁣⁣." She continued to write that her pregnancy journey wasn't an easy one, "All kidding aside, for everyone going through infertility and conception hell, please know it was not a straight line to either of my pregnancies. Sending you extra love."

As she revealed in the HuffPost video, there was a specific reason the Oscar winner wanted to speak out on the topic. In her own words, she wanted anyone reading her post, who may have gone through similar fertility struggles, to feel as though the weren't alone. She said:

"I think that we have a very one-size fits-all approach to getting pregnant. And you get pregnant and for the majority of cases, this is a really happy time. But a lot of people who are trying to get pregnant — that's not really the story. Or that's one part of the story. And the steps that lead up to that part of the story are really painful and very isolating and full of self-doubt. And I went through that."

Clearly, a great deal of concern and care went into Hathaway's Instagram post, especially as it relates to the conversation surrounding fertility. And it just shows you that the actor comes from a place of immense understanding. "I was just aware of the fact that when it came time to post that I was pregnant, somebody was gonna feel even more isolated because of it," she also added, "And I just wanted them to know that they have a sister in me. That's all."

According to the actor, she was "blown away" by how many women have gone through a similar issue to her, as she said, "And even my being aware that I was not the only woman that went through this, I have been so blown away by how many people go through this." After sharing her message, Hathaway is steadfast in simply wanting to be a "sister" for anyone else who thinks that they're alone on their respective pregnancy journeys.

The Les Misérables actor's recent pregnancy news came almost three years after she welcomed her first child, a son named Jonathan, with her husband. Back in January 2016, Hathaway revealed via Instagram that she was pregnant. In her post, she told her followers that she wanted to take full control of the announcement, as there had previously been paparazzi photos snapped of her at the beach (which were taken prior to the actor officially announcing her pregnancy).

Whether she's opening up about her pregnancies on her own terms or even opening up about some of the struggles she's faced throughout those journeys, you can always count on Hathaway to be beacon of positivity and understanding.