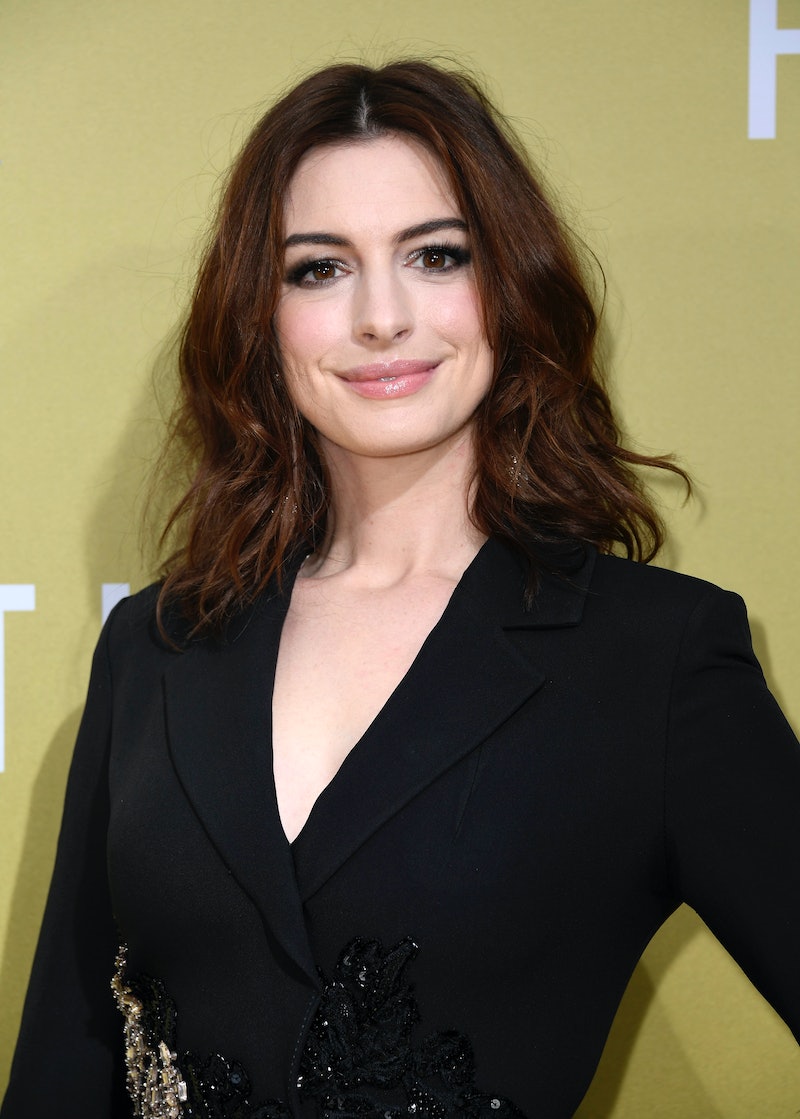 Maintaining body confidence in Hollywood isn't exactly an easy task, especially for women who are constantly in the spotlight — and being scrutinized. As Allure's September cover star, Anne Hathaway opened up about body inclusivity in Hollywood and she didn't mince words. Hathaway was extremely honest in her experiences as both a young actor and what it's like for her now at 36 years old.

As negative as that experience probably was for Hathaway, things have changed in a more positive way when working on her new film, The Last Thing He Wanted. Rather than being told to lose weight, director Dee Rees asked Hathaway to gain 20 pounds, which she had no problem doing. When it came to costume fitting, Hathaway was even more pleased to work with costume designer Ane Crabtree. "So I had that, then 20 years later I have Ane Crabtree asking me what my body does on my moon — which I realized meant my period — so she can make adjustments for me. It was just this beautiful thing."

That said, Hathaway recognizes Hollywood still has a long way to go when it comes to promoting a healthy body image and being inclusive of all shapes and sizes. She told Allure, "I am cautious in my praise of how Hollywood is shifting. There is so much more body inclusivity — which is great! — but the thin thing is definitely still the centralized 'normal' expectation."

As you can see below, in an April 2018 Instagram, Hathaway opened up about gaining weight for a role. It's unclear if she was referring to The Last Thing He Wanted, but Hathaway wrote next to a video of her working out, "I am gaining weight for a movie role and it is going well. To all the people who are going to fat shame me in the upcoming months, it’s not me, it’s you. Peace xx."

It's unfortunate that the Oscar winner even had to say anything about her future weight gain at the time, but that's the kind of world she lives in as a celebrity. Rather than letting trolls get the best of her and to prevent any ridiculous headlines, Hathaway took control and let everyone know the truth.

The Ocean's Eight actor discussed gaining weight for the movie previously mentioned on Today in May 2018. "It sounds kinda sad to say, I just wanted to be able to enjoy my summer and let everybody know that I’m living in my body and I’m happy with my body," she said. "And if my body is different than what you’re used to, or what you think it should be, that’s yours. And my experience is mine and I’m loving it."

Hathaway has never shied away in discussing body image and spreading the message that women are beautiful no matter their appearance. Not only do bodies change, but everyone has a different physical appearance that Hathaway believes people should embrace.

Next to an image of a pair of old jeans that she posted on Instagram in August 2016 after giving birth to her first child, Hathaway partially wrote, "Bodies change. Bodies grow. Bodies shrink. It's all love (don't let anyone tell you otherwise.) Peace xx #noshame #lovewhatyouhavebeengiven."

It's wonderful to hear that Hathaway recently had better experiences when it comes to her weight and being fitted for costumes. Hopefully Hollywood continues in a more positive direction in regards to body inclusivity. Thankfully, there are individuals like Hathaway who will fight for not only herself but other women when it comes to ensuring they work in a safe, respectful, uplifting, and inclusive environment.