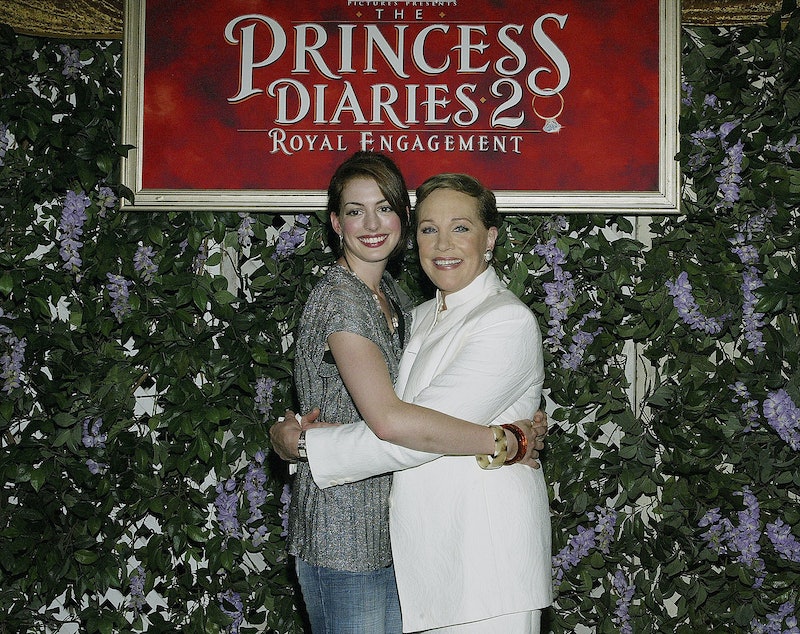 Everyone knows it's not appropriate for royalty to jingle, but hugs, well, those are totally allowed. And good thing too, since Anne Hathaway's favorite Princess Diaries memory was the hugs. According to Hathaway, Queen Clarisse Renaldi herself, Julie Andrews' hugs are definitely worthy of the crown.

While talking to People's Jess Cagle, Hathaway reminisced about what it was like to make Princess Diaries, a movie that is turning 18 years old this year — which just so happens to also be the same age that Hathaway was when she made it. While the film based on Meg Cabot's novel of the same name was Hathaway's first big hit, the now-Oscar winner told Cagle that it was the experience of working side-by-side with Andrews that was the real "dream come true." And there was one part of the experience that still stands out to this day. “Getting to make it and be on set every day, I got to hug Julie Andrews every day,” she said. “That part was also very, very, very magical."

Hathaway can't deny though, that the popularity of the movie was also "magical" and it's success was like "winning the lottery." She also joked that playing Mia Thermopolis, a high school student unexpectedly turned Princess of Genovia, made her a hit with the elementary school crowd — or in her words, it turned her into “a superstar to 6-year-olds."

It's nice to hear that Hathaway loved making the 2001 movie, directed by the late Garry Marshall, especially since she recently revealed that a Princess Diaries 3 script exists. During her appearance on Watch What Happens Live!, Hathaway said, "There is a script. I want to do it. Julie wants to do it. Debra Martin Chase, our producer, wants to do it. We all really want it to happen."

But — and there was a but — Hathaway and Andrews have some concerns stepping back in their royal roles. "It's just we don't want to do it unless it's perfect because we love it just as much as you guys love it," Hathaway told host Andy Cohen. "It's as important to us as it is to you and we don't want to deliver anything until it's ready, but we're working on it."

Previously, Andrews said she would be interested in making another Princess Diaries, telling BuzzFeed in 2017, "I would very willingly and happily do it." As for what they're working on, it's unclear whether Princess Diaries 3 will pick up where The Royal Engagement sequel left off. Either way fans are hoping Chris Pine would return as Mia's love interest, Lord Nicholas Devereaux. And who knows, Pine might be down to reprise the role. After all, in a 2015 Tumblr Q&A he joked, "Have you been reading my diary???" when a fan asked if he's been dreaming about the possibility of Princess Diaries 3. It's also true that OG Princess Diaries fans might be crossing their fingers that Michael, played by Robert Schwartzman, would return for this one.

Returning love interests aside, the real reason we need a Princess Diaries 3 is now so that Hathaway can get more of those Julie Andrews hugs she loved so much the first time around.