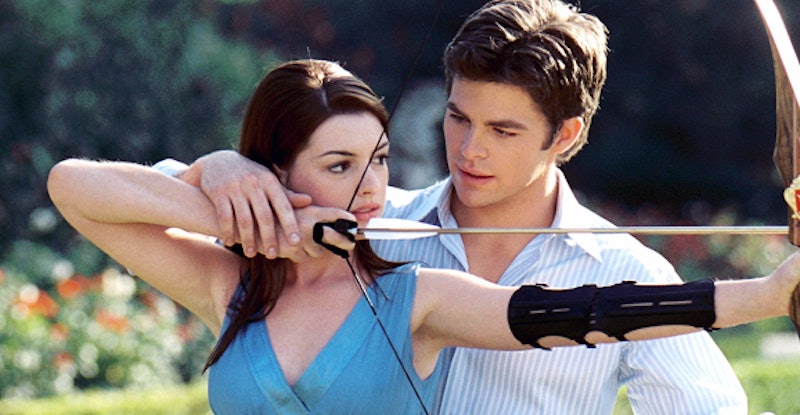 Pine, who played Mia’s love interest, Lord Nicholas Devereaux, in Royal Engagement could — and should — be a part of this installment. In case you missed it, back in January Chris Pine took part in a (very) important Q&A on Tumblr. A fan of his asked "Don't you pray every night for a Princess Diaries 3??? BECAUSE I DO." (Quick shout out to this fan's enthusiasm.) Naturally, Pine replied in the most charming of ways, with a follow-up question: "Have you been reading my diary???" And, just like that, across the world, a thousand hearts fluttered. And that fan probably passed out from sheer excitement.

Marshall seemed especially open to the return of Pine, when he suggested that we shouldn't rule out the possibility. “Maybe,” Marshall said. “He’s quite big now, you know.” Yeah, we know. All the more reason to bring him back, Marshall! Gosh, where have you been?

Though the final book penned by Meg Cabot centers around the marriage of Mia and Michael (her love interest in the first film played by Robert Schwartzman), it wouldn't really make sense for Mia to get back with Michael in the film series, and it wouldn't really make sense for viewers to be introduced to another love interest for her. One, because Mia and Devereaux's chemistry was royally magnificent. And, two, because after 12 years, we need to see some familiar faces. One of the biggest pulls to this — and any, really — threequel is the nostalgia factor. What I'm really trying to say is, Pine is what the people want. And so Pine is what the people should have.

I mean, no pressure, but like, make it happen.

More like this
Anne Hathaway Shared A "Thrilling" 'Princess Diaries 3' Update
By Darshita Goyal
Rupert Grint Just Shared A *Major* Update About Ron Weasley’s Future
By El Hunt
Your Guide To Watching 'Everything Everywhere All At Once' In The UK
By El Hunt and Sophie McEvoy
12 Years Ago, Austin Butler Manifested His Oscar Nom In This Disney Movie Scene
By Jake Viswanath
Get Even More From Bustle — Sign Up For The Newsletter
From hair trends to relationship advice, our daily newsletter has everything you need to sound like a person who’s on TikTok, even if you aren’t.