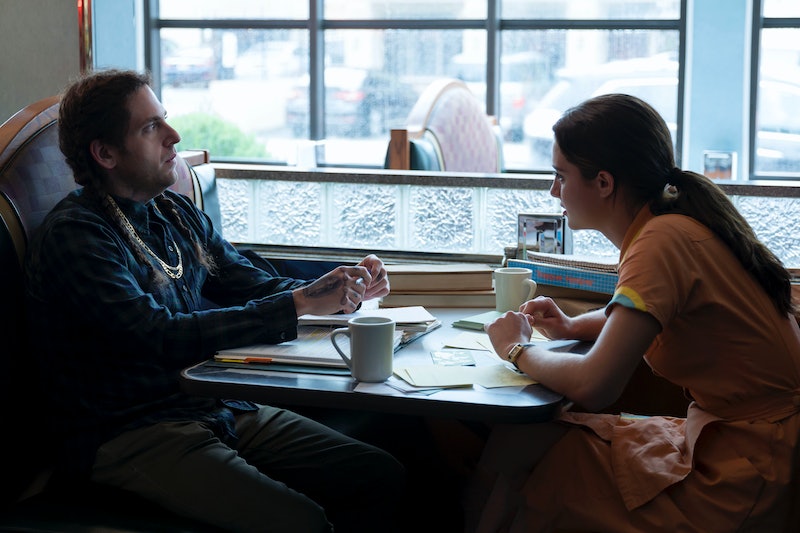 While the drug-induced dreams in Netflix's new miniseries, Maniac, allow us to enjoy Emma Stone and Jonah Hill in a variety of fun costumes and wigs, the high-concept fantasies the two characters create also say a lot about how we view the world. One of the most revealing sequences arrives mid-series when, after spending several simulations inextricably linked together, Annie and Owen take the "C" pill and find themselves finally separated. This gives viewers some insight into the characters' own, individual subconsciouses, ultimately revealing some hard truths about how deeply gender norms run.

In the "C" pill stage of the show's experiment — a pharmaceutical trial that promises to cure, like, all mental illness — participants are meant to confront the root of their psychological pain. Annie has to work through her grief and say goodbye to her late sister, while Owen has to stand up to his brother, a self-serving aggressor who's long been taking advantage of him. For Owen, that means a Goodfellas meets Baby Driver shoot-'em'-up in which he's a tough gangster who wants to go clean, clear his name, and make a break from his mafia family. It's a hyper-masculinized genre with a long history of falling back on sexist tropes, and the contents of Owen's storyline are no exception. In this world, women's only purpose is to advance the plot line. The only two female characters are Olivia, an ingénue waitress who's given little character development beyond being the type of woman Owen is drawn to, and Adelaide, an unnamed cop (Jemima Kirke) who in the real world is his brother's fiancé, though Owen clearly has feelings for her.

The feminist (if not comedically misandrist) world Annie cooks up, however, is much more nuanced. Though Lord of the Rings, World of Warcraft, Willow, and others of that ilk are often problematic in their representation of female characters, fantasy is generally considered a more feminized genre. That this is the illusion Annie — who hates elves and orcs and anything else to do with the genre — finds herself in enforces this stereotype. But it also pushes back against it: In one scene, men are used as literal chairs.

Perhaps with fewer accurate female representations to draw upon, Annie is able to exert more control over her constructs, but she still lands instinctually in a conventionally feminine genre. Owen, meanwhile, spends his fantasy attempting to rescue women — Olivia from her absent boyfriend, and Annie from the grieving supercomputer trying to trap her in her subconscious indefinitely — if only because, as a man, he's been told repeatedly that's what he should be doing. To be fair, Owen is not proud of this: He later tells Dr. Mantleray that his attitude toward women sometimes scares him, so it makes sense that his fear manifests as such an on-the-nose trope. But it's nonetheless clear that those patriarchal values are deeply instilled in him.

These fantasies seem to play into the way we sometimes use fiction to probe and process our own issues. Fables like Little Red Riding Hood or The Tortoise and the Hare are meant to teach children lessons and spark reflection on moral quandaries, and that practice carries on into adulthood with more complex themes. In real life, we escape into fictional worlds to contemplate our relationships and question society — the "C" pill just makes it feel more real. But as Maniac shows, the problem is that much of our storytelling is still ingrained with the sexism present in broader society. And until we can make meaningful, enduring change, those values will continue to implicitly affect our words, actions, and views — even if only subconsciously.

More like this
Netflix Reveals First Look At Wednesday In The 'Addams Family' Spinoff Series
By Bustle Editors
UK Viewers Will Have To Wait To Watch The Handmaid’s Tale S5
By Maxine Harrison
What Does Nancy Jo Sales Think Of 'The Real Bling Ring'?
By The Editors
'Survivor' Is Finally Coming Back To UK Screens
By El Hunt
Get Even More From Bustle — Sign Up For The Newsletter