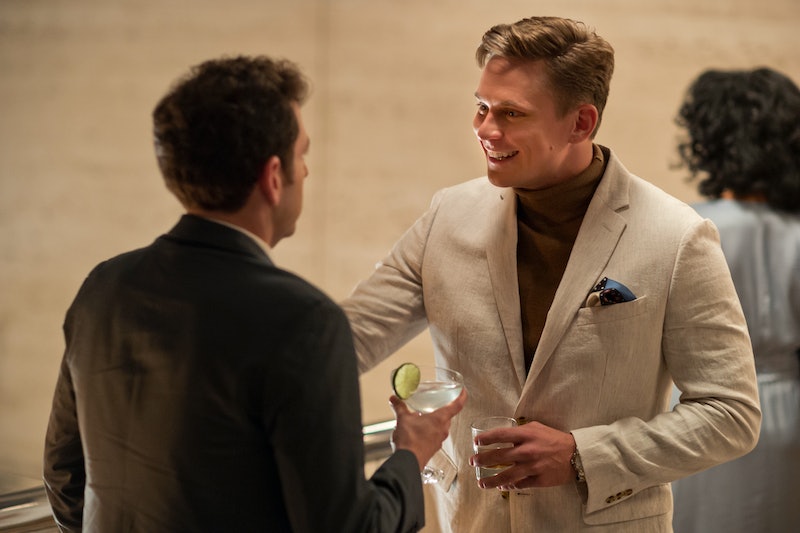 Spoilers ahead for all of Maniac. There's something unsettling about the Milgrim family on Netflix's new miniseries, Maniac. And it's not just the stark, unfriendly architecture of their New York apartment. Their dynamic is most aptly portrayed by their eldest son, Jed (Billy Magnussen), whose unfettered misogyny lands him in a legal mess. After a woman accuses him of sexual misconduct, he blackmails Owen into testifying on his behalf — a move that, Magnussen tells Bustle, makes him a "master gaslighter." And while the show's dreamscapes span from a Lord of the Rings-inspired fantasy to an '80s-set Long Island rescue mission, perhaps the most surreal thing in Maniac is what happens to Jed.

It's clear from Episode 1 that Owen isn't like the rest of his family. He's passive, they're aggressive, malleable while they're manipulative. And though audiences know Owen is scheduled to testify, they don't know what his brother's been accused of until the finale. "Have you ever seen your brother engage in an act of consensual or non-consensual urination?" their lawyer asks Owen as practice. "Absolutely not," he answers obediently, despite the very obvious implication that Jed is guilty.

"This was a one-time thing," Jedd's father, Porter (Gabriel Byrne), says before the trial. "My oldest son made a mistake. Any settlement will ruin our family name. And if this woman — if she can't find the generosity to forgive Jed for something that she agreed to, then we as a family will rip it out of her chest cavity." It's an incredibly violent statement, and one that reveals just how far the Milgrims are willing to go to protect their reputation. To them, status is everything — even if it comes at the cost of someone else's livelihood.

Magnussen speculates that Jed's behavior was shaped by extreme entitlement. "He got the MVP trophies, went to an Ivy League school, was prom king, whatnot," the Game Night actor says. "It is like the picturesque story of success in America. But the reality is that guy's probably the craziest person in the room. There's almost psychopathic tendencies to people like that." Indeed, it's chilling to watch Jed threaten Owen at his own engagement party, then suddenly shift to smiling warmly at those around him. "He never got said no to," Magnussen continues. "He always got his way."

In Episode 7, audiences see a billboard emblazoned with the phrase, "Just because you did it doesn't mean you're guilty," which seems a fitting summary for the Milgrim family motto. Jed was bred to be self-serving, never having to face consequences, and Magnussen says the Milgrims "only care about upholding that name." Anyone that's considered weak, he adds, is tossed aside — including Owen.

At one point, Jed admits that he's a horrible person, then immediately throws his mug against the wall as if in self-revolt. Magnussen believes that his character knows how awful he really is, but it's one thing to acknowledge it and another to own up to it. Case in point: When the court presents footage of a man who looks exactly like Jed (like, it's definitely Jed) forcing a female coworker to urinate on him, he lashes out at his younger brother rather than taking responsibility. Even when confronted with concrete evidence, Jed can't own up to his wrongdoings, which makes him weaker than Owen will ever be. And, as if to prove it, Owen then gathers the courage to go back on his word, testifying that the man in the video is absolutely, irrefutably his brother.

It's in this moment that Maniac goes from skewering unchecked abusers to sending them a warning cry, imagining a world in which assault is met with actual consequence. While Jed's final verdict isn't revealed, the evidence is damning, and Magnussen predicts he'll go to jail. That's a surprisingly firm conclusion given the current climate, where men who have admitted to varying degrees of sexual misconduct have already begun to relaunch their careers, or only now face legal repercussions. It's been hardly a month since comedian Louis C.K. returned to a somewhat-welcoming stage one year after admitting to misconduct. And Bill Cosby, who has denied all accusations against him, was sentenced to three to 10 years in prison on Tuesday — five months after he was convicted of aggravated indecent assault, four years after claims against him resurfaced, and over a decade since the alleged assault took place.

That makes Jed's fate feel wildly unrealistic, even for a show as consistently surreal as Maniac. After nine episodes of non-stop fantasies, the courtroom scene feels the most outlandish yet, speculating what could happen if abusers were held accountable, but, sadly, likely will not.