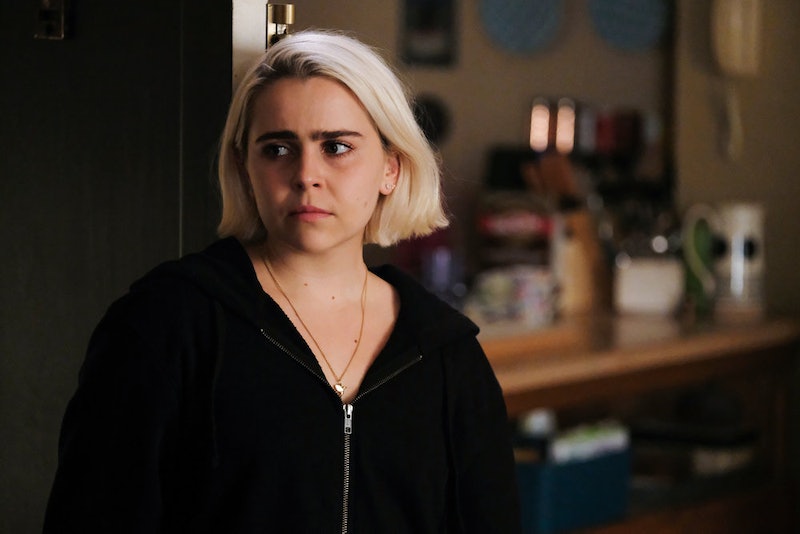 Spoilers ahead for Good Girls Season 2, Episode 8. Annie doesn't have a history of finding good men on Good Girls, and fans may be disappointed to learn that her new love interest is hiding a pretty major secret from her. As is revealed during the April 21 episode, Noah is an FBI agent working with Turner to try to take down Beth, which means he's just using Annie to get some intel. Rough.

Over lunch, Turner voiced his frustration that Ruby wasn't going to turn on Beth, but Noah (if that's even his real name) seemed a little more optimistic about Annie. "I'm out of the friend zone," he bragged to Turner. "Let me run with it for a while. Let me see what turns up."

Until then, we only knew Noah as Annie's new boss at Fine and Frugal. Initially, he seemed like a much better replacement for Annie's creepy former boss, Boomer. The two quickly made a romantic connection, and they took several steps forward in their relationship during Sunday's episode, grabbing fast food together and having a serious talk about her co-parenting struggles. Noah even met Annie's son, Sadie. But their connection may be too good to be true since Noah is only getting close to her to see what he can get on Beth to take her down. And since Annie doesn't have a deal with the FBI like Ruby tried to have, she could get taken down in the process, too. So much for Noah "kinda" liking her.

There did seem to be some real feelings during their conversation at Nancy's on Noah's part, but maybe he's just a really good undercover agent. In any case, even if he is really falling for Annie, they way he approached the potential relationship is pretty messed up. Annie already has some major trust issues, and if she finds out Noah's secret, this could set her back even further. Annie deserves to be happy and with someone who is emotionally available, not already married, not creepy, and not lying to her. She may be thinking that Noah is it, but he's not.

Honestly, even if Noah was only her boss and not an FBI agent, the power dynamics there still would have made this relationship kind of iffy. As we know, Annie doesn't have the best dynamics with her bosses. And while Noah may not be as outright creepy as Boomer, he's still lying to her and using her for a government investigation. So 'shipping them feels a little strange now that we know his real deal. Their relationship is off-balance, power wise, no matter how you look at it.

Unlike Annie, many fans knew Noah wasn't to be trusted as soon as he showed up.

He did seem too good to be true.

And Some Had Him Pegged From Day One

If only Annie could see through him like viewers could. Hopefully she learns the truth before she falls for him completely, because she doesn't deserve to get her heart broken by a lying guy again.